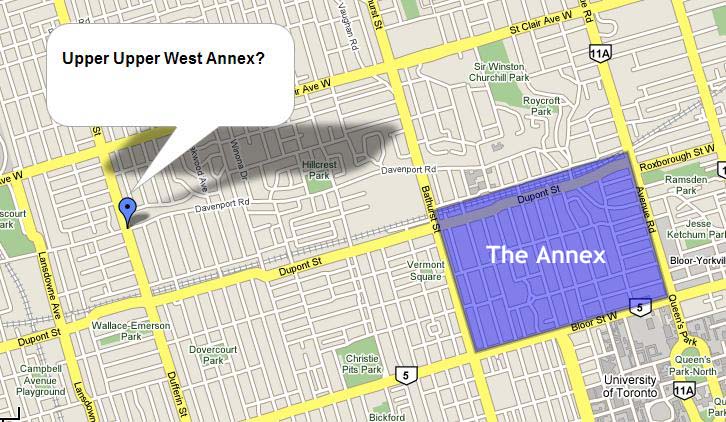 “So,” Paul concluded, pausing to swirl his caesar-with-extra-horseradish, “I believe I live in the Upper Upper West Annex.”  Seated comfortably at the Drake Hotel, that paragon of re-bricking and re-branding, I tried to bring into focus a fuzzy mental image of young writers and other ingénues hiking up their flowing skirts to navigate train tracks and strip malls in a quest for a decent fair trade soy beverage.  Dufferin and Davenport may be a lot of good things, but…the Annex?

My friend was only half joking when he suggested re-branding his neighbourhood for the benefit of curious colleagues at his firm.  In today’s Toronto, lifestyle credentials—whether luxurious, artistic or sufficiently skid row—seem to count for a lot.

Now, I’m not one to question the power of words and images— as Realosophy’s reigning tyrant of message integrity, I bow at that particular altar.  Great storytelling is at the heart of effective branding strategies.  But what makes a story great?  As condos and other landmarks sprout up in this Jack-and-the-magic-beanstalk city, some creative efforts strike me as clever, in that they capture what is truly authentic about Toronto, while others appear less ambitious, vague nods to somewhere else.

Wandering through Corktown condo showrooms recently, I glimpsed a tag line that triggered some semantic-rage-in-the-city.  It all began when I was invited to move into the hippest “Lower East Side” address in Toronto.  Lower East Side?  Suddenly, I was Dorothy looking for little Toto.  Just as I found myself thinking that Toronto was finally picking-up in the old self-esteem department, building buildings that only some liked, gathering alt-urban fans like Richard Florida and Will Alsop—I was rudely pulled off my feet and plunked down somewhere else.  Once again, Toronto was talking about what it wasn’t, rather than what it was.  It made me think of my latest bout of hubris, when I proudly equated the West Don Lands project to Central Park for the benefit of my New York-based sister.  She arched a carefully overgrown eyebrow in response.  Point well taken.

Call us purists, but Toronto doesn’t do the giant park anchoring the city thing. We don’t do the compass directions-as-name thing either.  We may have east of Yonge and west of Bathurst, but we talk in neighbourhoods.  It’s what we do.

“Oh come on, what’s in a name?” a friend asked after I reported the offending descriptor.  She even added that she found it sort of cute.  She would.  She eats Cheez Whiz sometimes, when she thinks no one is looking.  It’s precisely the sort of thing that gets you thinking about names, during that leap too far, when you start to wonder if phosphorescent yellow-orange dye no. E160b may not live up to its billing as a dairy product.

Later, John plied me with chamomile tea and helpfully pointed out that developers were only trying to package the benefits of up-and-coming Corktown with those of the Distillery District.  An understandable cause, I agreed, but the attempt rang less than true.  Only I couldn’t explain why.  My neck was starting to feel hot and prickly.  I had boldly dashed out onto the limb of a shaky argument.  I did the only thing I could do.  Open browser, get to google, enter “Toronto” and “Lower East Side.”  And that’s when Authenticity, that wily goddess, sang out to me.  Lower East Side Tattoo Studios.  Kingston Rd.  Scarborough.  Finally, a name claim that rang true. 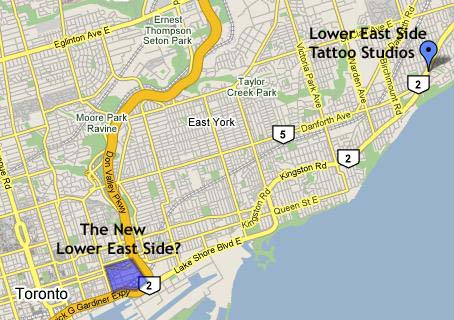