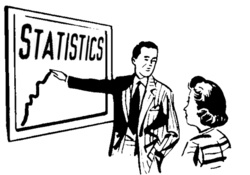 Ed note.  Real Insight is a periodic feature decoding some of the many mysteries surrounding HomeBuying.

Some of our readers might recall that the Toronto Real Estate Board (TREB) announced that August 2007 was the 5th consecutive record-breaking month for resale home sales in Toronto. But a recent Globe and Mail article titled “Soaring prices dampen August home resales” probably left many of those same readers wondering what’s really going on in the housing market. Were home sales on the rise in August, or did they slow down? Understanding how real estate statistics are reported will help you get a better idea of what’s actually going on in your market.

One of the first things you should be looking for when reading housing statistics is the geographic area that the statistics cover. In the case of the TREB announcement for August, the statistics were strictly for Toronto and the GTA whereas the Globe and Mail article was reporting on national housing statistics. The local numbers give HomeBuyers a better idea of what is going on in their specific market whereas national statistics give you a better understanding of the overall health of the Canadian real estate market.

Another important factor that influences housing statistics is the time period we are comparing. For example, the Globe and Mail article indicated that August home sales dropped 4.1 percent from the previous month. In this case we are comparing sales in August to sales in July in the same year. One of the problems with comparing real estate sales from one month to the next is that it doesn’t take into account seasonal influences in the demand for real estate. The demand for real estate changes throughout the year with spring typically being the busiest period and winter being the slowest. When we compare one month to the next, we do not account for these seasonal variations. The statistics in the TREB report, on the other hand, compared sales in August 2007 to sales in August 2006. This approach eliminates the seasonal influences on demand from one month to the next and is a better measure of the market relative to previous years.

In the case of Toronto’s August market, the fact that housing sales decreased by 10% from July doesn’t really say much about the state of the market. We expect housing sales to drop from July to August because the demand is historically lower in August than it is in July. We also would have expected sales to decrease in August this year because July had extraordinarily high sales. The Toronto Real Estate Board had 8,912 sales in July this year compared to 7,082 in July 2006, a 26% increase and a record breaking volume for the month of July. So sales may have dropped a little from July’s record breaking highs, but sales in August were still 15% higher than they were in the same month last year, and similarly set a record for the month of August.

When looking at media reports about the housing market, try to look beyond the headlines. Digging a little will help you make sense of what’s really going on in your real estate market.