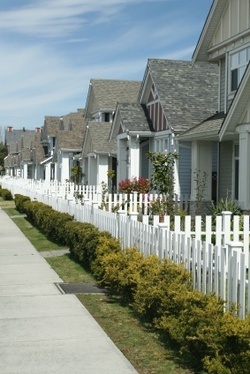 The
answer, of course, requires a reading of three separate court
decisions, and depends on whether the reader sides with the plaintiff
or defendant.

Anthony and Catherine Suprun own a cottage
property at Turkey Point, not far from Long Point on Lake Erie. Several
members of the Sloat family own a similar cottage next door.

Back
in 1981, Norfolk County passed a zoning bylaw defining a "boundary
fence" as "any fence, hedge, free standing wall ... intended to
delineate a property boundary." The bylaw limits the height of boundary
fences in residential areas to a maximum of two metres (6.6 feet).

A separate bylaw, the fence bylaw, prohibits virtually all fences in Norfolk county from exceeding two metres in height.

The
fence bylaw allows the county to remove a nonconforming fence, and
provides for a fine of up to $2,000 for any contravention.

In
early 2001, the local building inspector advised the Sloat family
orally and in writing that they could construct a retaining wall
between their property and the Suprun property.

Three months after permission was granted, the inspector wrote to
the Sloat family's lawyer to recommend construction cease until the
county resolved a complaint about the fence. By that time, however, the
fence had been completed.

Justice Quinn described the barrier
as 213 feet long, consisting of railway ties stacked horizontally to a
height of four feet to retain an earthen berm. A total of 57 juniper
shrubs were planted on top of the berm, covering 195 of the 213 feet.
When originally planted, the shrubs were 10 feet high, but by the time
the case got to court, they were 18 feet high. Together with the
retaining wall they formed a solid barrier about 23 feet in height.

Eventually,
the Supruns sued the Sloat family for a court order declaring that the
barrier was subject to the county zoning and fence bylaws, and that it
be brought into compliance or removed.

In raising 10 separate
objections to the Supruns' court case, the Sloat family "rained issues
down upon the court," according to the judge.

After a very
lengthy analysis of the issues, Justice Quinn decided last July that
the barrier was a fence within the meaning of the fence bylaw and that
it contravened the legal height limit.

He ordered the Sloats to remove the fence or alter it so that it complied with the bylaw.

The
parties were back in court again last December, and in a 59-paragraph
judgment, Justice Quinn awarded the Supruns costs of $14,210 payable by
the Sloats.

But the case didn't end there. The Sloat family
appealed and the matter was heard and decided by the Ontario Court of
Appeal in February.

The Sloats argued before a three-judge
panel of the Court of Appeal that the region's zoning bylaw superseded
the local fence bylaw. The court ruled that there was no basis to
challenge the validity of the local zoning bylaw, which didn't apply to
the cottage area in any event.

The fence bylaw applied to the cottages, and the barrier was in violation of it. The court dismissed the appeal.

In
a rather puzzling move, the court awarded $6,000 in costs to the Sloat
family – which lost the appeal. This may have been a typographical
error, but it stands in the court record.

To answer Justice
Quinn's original question, this case involved neither a good fence nor
a "good" lawsuit. The Sloats had to remove the barrier at their own
expense, and pay costs at trial for the Supruns' counsel. The lawyers
were paid for three court appearances each, totalling perhaps $50,000
or more. The case emphasizes how much time and money can be spent on
neighbour disputes. In my view, mediation or arbitration might have
produced a cheaper and faster result.