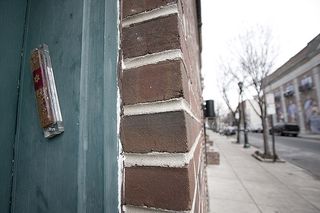 Attached religious object likely should have stayed with house

Is a religious object attached to the outside of a house or condominium a fixture, which remains with the home on a sale, or a chattel, which can be removed by a departing owner?

That was the issue raised recently by a colleague, Gary Posesorski, who practices real estate law in Toronto.

One of his Jewish clients was selling his house and asked Posesorski whether he could remove the mezuzahs attached to the doorframes. Posesorski asked for my take.

A mezuzah is a small piece of parchment contained in a decorative case. The parchment contains handwritten Hebrew verses from chapters six and 11 of the book of Deuteronomy. Following the biblical commandment to write these words “on the doorposts of your house,” ancient custom requires a mezuzah to be attached to the doorframe of the front door and often most other rooms in a Jewish home.

The purpose of the mezuzah is to remind the occupants of God’s presence in the home.

I asked six lawyer colleagues whether a mezuzah may be removed when the house is sold, and, predictably, I received seven different answers.

The law of fixtures is, at best, murky when it comes to making a determination of whether an item of personal property — a chattel — becomes a permanent fixture when it is attached to a building.

According to court cases dating back some 150 years, a chattel becomes a permanent fixture when it is “sufficiently attached” to land or buildings so as to become part of the ownership of the property itself.

As an example, a bathroom mirror which hangs from a picture hook is generally considered to be a chattel which can be removed. If it is attached to the wall by little brackets screwed into the drywall it is a fixture. In both cases, however, the courts add the caution that these guidelines apply “unless the circumstances indicate otherwise.”

In applying these rules over the years, the courts have looked at the degree and purpose of the attachment. Sometimes the judges try to decide the issue by inventing the opinion of a “reasonable bystander.”

Just to complicate matters, alongside the secular laws there is a completely different — and partially conflicting — set of religious rules which apply to the removal of mezuzahs when ownership of a home changes hands.

The religious custom is that a mezuzah should not be removed unless the new occupant is a non-Jew or there is a danger that if left behind the mezuzahs would be defaced - for example by renovation.

Although mezuzahs usually should be left behind, they may be exchanged for less expensive ones or the new owner may be asked to pay fair market value for them.

Typically, a mezuzah case is attached with nails, screws, glue or double-sided tape. Often the intention is that it should remain in place on a sale if the new owners share the same religion, although I have never seen a clause regarding mezuzahs in an agreement of purchase and sale.

The consensus of a few of my legal colleagues is that mezuzahs are fixtures. If a vendor wants to remove them, it should be provided for in the purchase agreement.

None of this made any difference, however, to Posesorski’s client. He removed his mezuzahs before closing, and to date, the purchasers have not objected.