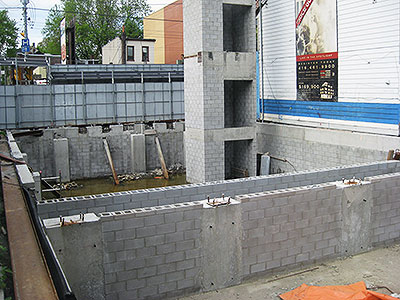 Leslieville News: The Pit at Queen and Pape

"What's the story with the stagnating pit at the corner of Queen and Pape?" That's the question many residents have been asking as it has been months since there has been any sign of activity at the site of the Film Studio Lofts. What's baffling about the abandoned project is that for the past three years there has been a sign posted at the site proudly proclaiming that the project sold out and occupancy would start in Fall 2007. 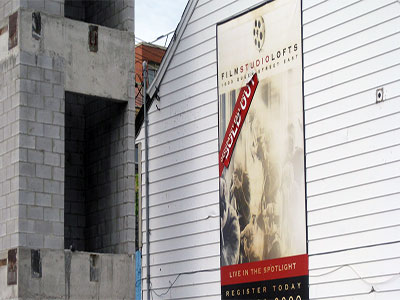 Well as many of you probably already guessed nobody is going to "live in the spotlight", at least for now.

A little investigative blog-ism, which included calls to the city, a conversation with a purchaser of one of the units, some extensive Googling and a call to Councillor Fletcher's office, and I've pieced together the story - past, present and future.

This was the first project for the builder, Total Site Works (I'll go into more detail about this in another post, but for now I'll just mention that I cannot stress enough the importance of doing your due diligence a builder if you are considering purchasing a pre-construction home). Previously to The Film Studio Lofts project they had been the lead contractors on several projects across the city but had never built their own condo.

Units went up for sale in 2006 and quickly sold out; the prices were amazing, even by 2006 standards. At that time the purchasers were given a fall 2007 occupancy date. The builder fenced off the lot, dug the pit and poured the elevator shaft and then all worked stopped. Occupancy dates kept getting pushed back but still nothing was happening at the site. Behind the scenes the builder was having trouble getting trades to do the work and some permit issues with the city. By this point, spring 2008 Toronto was in the midst of the condo boom. Every crane and cement truck in Southern Ontario was in use and the builder couldn't get anyone to do the work.

Finally, once the market slowed down and trades became available, the cost of materials and labour had increased so much that project was no longer financial viable for the builder. According to one person I spoke to, the cost of producing the units had become greater than their original sale price.

In November all the purchasers were informed the condo would not be built and had their deposits returned. As every Leslieville resident knows the site is sitting there looking like an eyesore, a massive fail and a billboard for guerrilla marketers.

And finally some good news. The site is in the process of changing hands to a yet-to-be-named developer. The preliminary applications are for a 5 - 6 story loft style condo with retail on the ground floor - something that should fit well into the surrounding area. Hopefully within the next 3 -4 years Leslieville residents will have a shiny new condo to replace the dirty hole the currently occupies the space.

As a final note I'll mention that besides being a nuisance to neighbours, the story of the Film Studio Lofts raises some important issues you need to consider when buying a pre-construction home. In my next post I'll discuss some of the potential dangers and how to best avoid them.