Any attempt to forecast the direction of Canada’s interest rates in today’s environment must weigh the strength of our domestic economy against headwinds blowing from both the US and China. While the Canadian

economy chugs along, China’s is sending mixed signals and the US economy continues to slow. The health of these two economic super powers will significantly influence our own economic momentum, and as such, the key question is: how will our central bank reconcile these competing internal and external forces when formulating our interest rate policy? It’s a tough call. Edging rates higher gives Mr. Carney more flexibility to provide future monetary stimulus, but it also slows our delicate recovery, which is still far from assured against a backdrop of global economic uncertainty.

First, a recap. In our Spring Mortgage Market Update, we tried to talk people off the ledge, predicting that interest rates would not go to the moon despite the ominous forecasts of most bank economists. Since that time, these same economists have revised their predictions of interest-rate increases downwards, citing the same factors that we used to refute their original predictions. Being wrong didn’t hurt the banks at all mind you. Far from it in fact, since the customers that heeded the bank’s dire warnings converted to their much more profitable fixed-rate mortgages (I guess having the bully pulpit has its advantages). What a shame for customers who locked in at 4.4% when five-year fixed-rate mortgages have come down to 3.9% since that time.

In the US, where 85% of our exports are sold, the summer winds have brought fears of a double-dip recession and increasing concerns over the threat of deflation. The US Fed’s policy rate has been at zero percent since December 2008, and rather than increasing spending, this emergency level stimulus has corresponded with increased savings and reduced lending, creating ideal conditions for a potential liquidity trap. While some may think that talk of a US liqui

dity trap is still premature, the situation bears watching. For example, a comparison between the factors that led to Japan’s liquidity trap (the best and most recent example) and the factors now present in the US shows many similarities: property and credit bubbles bursting, a large transfer of debt from the private to the public sector including government support for companies that would otherwise fail, consumers and businesses saving instead of spending, interest rate levels too low to provide additional stimulus and the inability of quantitative easing (printing money) to create inflation. Given the importance of the US as our main export market, we will be seriously impacted if they are hit with a deflationary spiral induced by a liquidity trap.

The difference in economic momentum between Canada and the US is unprecedented. Our economies have typically mirrored one another, and as a result, so have our interest-rate policies. In fact, our central bank has raised its overnight rate independently of the US Fed on only two occasions, most recently in 2003, and both times it beat a hasty retreat. That said, many experts aren’t expecting the US Fed to raise rates until early 2012, so with that a mind, another key question is: how high can Canadian interest rates go while the US stands pat? Higher interest rates relative to those in the US will attract more foreign investment, which will cause our dollar to appreciate. A higher dollar makes our exports more expensive, which slows our economy. Thus, the wider the gap between Canadian and US interest rates policies, the lower the odds of further rate increases. The economists I follow believe that our overnight rate can be sustained at a level about 1% higher than the Fed policy rate (we’re .75% higher as of today). That doesn’t leave much more room for future increases.

So if the US economy continues to struggle, where will our export-led growth come from? For commodity-based economies like ours, China is now the story. This fact was driven home on July 19, when 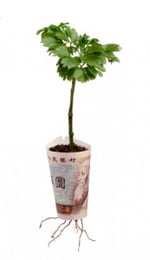 the International Energy Agency announced that China had passed the US as the world’s largest energy consumer. When you combine that with China’s voracious appetite for all commodities, its importance as an engine of global economic growth becomes clear. With a growth rate of 10.5% in Q2, 2010, China’s economy looks very different from that of the US, but there are concerns over momentum (China’s growth was 11.9% in Q1) and fears of credit and housing bubbles. To combat this, Chinese banks have been told to reduce their lending, and as a result, lending is down 30% in the past couple of months (and their stock market is down 27% over the same period). The risk of a continued slowdown in China will also factor into our central bank’s future interest-rate decisions.

I Think Variable Rates…
Won’t be going much higher until the global economic outlook changes. Make no mistake, Mr. Carney would ideally like to move the overnight rate higher to provide some additional breathing room for future monetary stimulus, probably from today’s .75% to about 2%. But since the effects of rate changes are only felt over time, further tightening is very risky with so much uncertainty in the global economy. Besides, one of Mr. Carney’s main concerns was that emergency level short-term rates were fueling a potential housing bubble, but with our return to a more balanced real estate market this no longer appears to be an issue.

The best advice I can offer for existing variable-rate mortgage holders is to take advantage of today’s low short-term rates by increasing your scheduled payments and paying down your mortgage more quickly. The more you do this, the more rates have to go up in the long run before you are worse off

(you are effectively building your own interest-rate protection).

If you’re buying, refinancing, or renewing, I’ll reiterate a point made in our Spring Mortgage Market Update. While choosing a fixed-rate mortgage can be thought of as buying insurance against future rate increases, a variable-rate mortgage provides its own type of insurance in recessionary times. After all, in a slowing economy short-term money is cheap, and saving money on your mortgage payment is a good way to offset the risk of lower income. So if you’re bullish about our economic outlook, choose fixed, but if you’re bearish, choose variable. It might sound a bit counter-intuitive but it’s true!

I Think Fixed-Rates…
Will go lower before they go higher. While fixed rates are determined by the bond market, which sets pricing using a longer time horizon, the economic uncertainty in our post-credit-bubble world stretches well into the future because nobody really knows how long this massive deleveraging process will take. That said, when there is a consensus that a return to economic growth and stability is on the horizon, fixed rates should rise before short-term rates, as we saw in April and May of this year (what I refer to as “The Great Head Fake of 2010”). While we think variable rates will save our clients money over the long-term, fixed rates are very low from any historical perspective and you can’t put a price on a good night’s sleep gained from the assurance of interest-rate certainty. We also reiterate our belief that first-time home buyers and borrowers with only a small amount of equity in their property should still strongly consider the latter option.

Wrap-up
While our domestic economy shows enough strength to justify further increases in our overnight rate, our central bank cannot ignore the slowing global economy. Balancing these two forces is made m

ore difficult by the fact that the effects of interest-rate increases are only apparent over time. It’s a little like trying to hit the brakes on a super tanker – you find out in about five miles whether you got it right. The bottom line is that with 50 basis points already added to the overnight rate, with inflation hovering at 1% (well below our central bank’s upper limit of 2%), with the introduction of HST in Ontario and British Columbia expected to slow consumer spending and with a return to a more balanced housing market across the country, I don’t see any urgency for further rate increases.

David Larock is an independent mortgage
planner and industry insider
specializing in helping clients purchase, refinance or renew their
mortgages.
David's posts appear weekly on this blog (movesmartly.com) and on his own
blog (integratedmortgageplanners.com/blog).
Email
Dave