If there’s one thing that concerns me about Toronto’s real estate market it's the uncertainty about the boom we are seeing in the pre-construction condo segment.

As Toronto’s pre-construction condo market continues to break sales records I wonder when this boom is going to run its course.  Over the past few months, my concerns regarding the longevity and stability of this construction boom have heightened as a result of several observations.

If that wasn’t enough, Toronto is going to see 70+ new condominium projects launch this fall alone, more than double the number of condo launches during the same time last year.

As long as investors are buying builders will continue to flood the Toronto market with new condos. Given that most investors are going to try to sell their units after these condos are completed, is there going to be enough demand from end users to maintain a balanced market?

For the majority of the condo boom commissions were traditionally in the 3% range.  Today you’re more likely to see commissions in the 4-5% range.

The problem with most condo investors is that they are not buying condos for the long-term to generate rental income. The majority of investors are actually speculators who are trying to flip their condo as soon as it’s completed, or shortly after, for a profit.

If there’s one thing that history has taught us it’s that markets that are fueled and driven up by speculators rarely end well.

In most cases, the economics of buying a pre construction condominium doesn’t make much sense.

In a normal market, pre-construction condominiums typically sell for less than comparable finished condominiums in the same area to take into account the risks buyers are taking when buying a pre-construction condo.  Risks can include locking in your money into a condo development that is never going to be built or even worse a condo project that gets started but is never completed because of a downturn in the market or because the builder goes bankrupt.

Over the past couple of years, prices for pre-construction condos have appreciated to a point where they are now selling for the same price, and in some cases more, than comparable resale condos.

So if we make the fairly safe assumption that the condo market is currently being fueled by investors, why would an investor buy a pre-construction condo if they can buy a comparable finished condo for the same price?  What’s their incentive for taking on the additional risk?

Do preconstruction condos always appreciate at the rate investors expect? Is there really a market for condos in the $800+ per square foot price range outside of Yorkville? 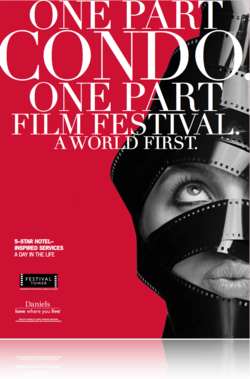 To help answer these questions let’s consider Festival Tower, a condo priced in the mid to high end of the market which just completed this year.  Many of the owners in Festival Tower bought into the building at roughly $650 per square foot (psf) pre-construction. This building was priced at a premium to the entry level condos that were selling for around $450 psf at that time. There was no real reason for the premium other than the hype that came along with the building’s association with the Bell Light Box and TIFF.

Festival Tower was completed this year and since then 133 different condominiums have been listed for sale, the majority in the $800 psf range. Out of the 133 condos listed for sale this year only 13 actually sold.

Which raises the question, just because an investor thinks the condo they bought for $650 psf pre-construction should be worth $800 psf on completion, is it still worth that if nobody is willing to buy it?

More importantly, there are several pre-construction condominiums in the same area as Festival Tower selling in the $700-$800 psf range which makes me wonder - if nobody is buying the condos at Festival Tower today, and with condos at the nearby Ritz Carleton also lingering on the market, why does anyone believe that the resale market in that neighbourhood needs thousands more condos in this price range?  What’s going to happen to that segment of the market when all of these mid to high end condos are completed?

Economists and industry insiders have quite a few stories that attempt to justify the strong demand in pre-construction condos.

The principal arguments include:

The problem with the immigration argument is that, as I outline above, immigrants (buying as end users) are not driving the boom for pre-construction units downtown, speculators are.

Furthermore, once we start approaching the $800 psf price range buyers would actually be paying a premium to live in condos because freehold houses are not that expensive yet.  A buyer looking in this segment of the condo market with a $1M price range could afford just over 1,200 squre feet which would likely get them a condo with 2 bedrooms and 2 bathrooms.  For roughly $1M buyers have plenty of housing options in the downtown core that would offer them significantly more space than 1,200 square feet which makes freehold houses cheaper (per square foot) than condos.

Condos have historically been viewed as an affordable alternative to buying a house but when condo prices appreciate too quickly we reach this prearious place where it's actually cheaper to buy a house.

There is more merit in the argument that condos are adding much needed supply to the rental market. The rental market in Toronto has traditionally been and continues to be tight, largely because no new rental buildings are being built. The one problem with this argument is that as the price for condos rises it makes less sense for an investor to tie their money up in a rental condo. It may have made sense financially to buy a condo as a rental property back when investors were spending $450 psf.  When investors are spending $600-$650 psf it doesn’t make any sense to own a condo for its rental income because the rent they can generate does not offer a good enough return on their investment.

Despite what some might think, the level of construction we are seeing in Toronto’s condo market can’t go on forever.  The market is going to cool down and I believe it will be sooner rather than later.

I’m confident that there will continue to be strong demand for smaller affordable units in the downtown core. These units will be attractive to both end users and investors looking for a rental property.

Condos in the $800+ psf price range (outside of Yorkville) are the most vulnerable.  I don’t believe Toronto has enough demand from end users to support the volume of condos that are coming on the market in this price range.  The poor resale sales at Festival Tower and the Ritz Carleton are just a few examples of this lack of demand.

I'm not entirely certain where prices will end up, but what I do know is that we have the one key ingredient that has fueled virtually every other asset bubble in history: a market driven by a large number of investors/speculators who are buying aggressively because they simply believe prices are going to continue to rise, without questioning their key assumptions. It's not a great place to be.

(Note: A big thanks to condo blogger Andrew La Fleur for his great blog post on absorption rates in different condos, including the Ritz Carleton and Festival Tower.)