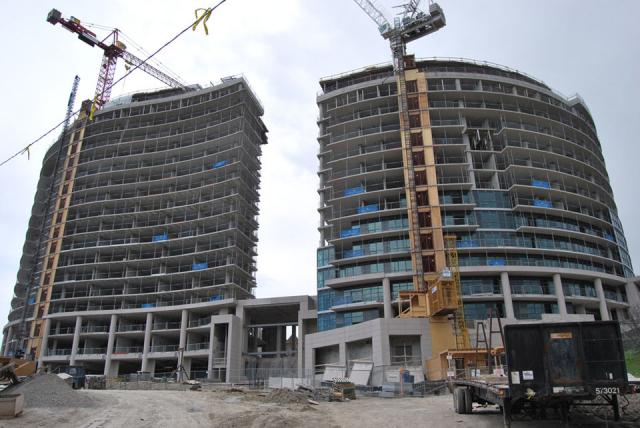 Toronto Condo on Leaside Street With Name That Had Lofty Beginning

A couple of weeks ago I
was meeting with a client to sign closing documents for his condominium
purchase in the Scenic on Eglinton project in Toronto’s Leaside
neighbourhood.

Since the project
address is on Brian Peck Cr., I asked “Sunny” if he knew who Brian Peck
was. It turns out that, although both of us are history buffs, we had no
idea who the street was named after.

But we both wanted to
know the answer so, with Sunny’s enthusiastic co-operation, we paused
the signing process and began an Internet search to uncover the mystery
of the man whose name graces the street signs.

We quickly discovered
that the name Brian Peck is associated with the old Leaside Aerodrome
which was built by the Canadian government to train pilots, mechanics
and crews for the Royal Flying Corps. Construction of the airfield began
in May, 1917, on 220 acres between Wicksteed and Eglinton Aves.

On June 24, 1918, Peck
piloted a Curtis two-seater airplane from Montreal to the airfield on
the outskirts of Toronto. He had on board the first bag of mail to be
delivered by air in Canada. The flight left the Bois Franc Polo Grounds
in Montreal at 10:12 a.m. Wind and rain buffeted the small plane which
was forced to make refuelling stops at Kingston and Deseronto.

Finally, at 4:55 p.m.,
Peck and mechanic C.W. Mathers landed at the Leaside Aerodrome, just
south of the current intersection of Brentcliffe Rd. and Broadway Ave.

Today an Ontario
Heritage Foundation plaque stands in a small parkette at that
intersection to mark the delivery of Canada’s first airmail.

The plaque notes that
the flight had been arranged by a civilian organization, the Aerial
League of the British Empire, to demonstrate that aviation was the way
of the future. The Canadian post office co-operated in the mail delivery
and each of the 120 letters on the inaugural flight bore a special
cancellation to mark the occasion.

The airfield was closed in 1931 but it is remembered by two local street names — Aerodome Cr., and Brian Peck Cr.

I contacted Bob Dixon,
controller of Aspen Ridge Homes, to see if the developer of Scenic on
Eglinton should get credit for the Brian Peck street name. He emailed to
say that the name was inherited when the company purchased the land.

Brian Hall, who works
at the City of Toronto’s land and property surveys department, told me
that when new streets are being created, research is done to find names
that do not conflict with existing names, and are suitable to the area.
The names should also meet the criteria of the street naming policy,
which is posted on the city’s website.

The name Brian Peck Cr. was suggested by the East York Historical Society back in 2001.

Toronto’s street
naming policy is an excellent way to celebrate our rich heritage. Back
in 1979, the city of Toronto held a competition for street names in the
St. Lawrence neighbourhood housing development. The result was six
streets named after local historical figures.

Longboat Ave., was
named after Thomas Longboat, an aboriginal champion long-distance
runner. Albert Franck Place honours the famous Canadian artist, and
Henry Lane Terrace was named after the architect who designed the Church
of the Holy Trinity, parts of Osgoode Hall and the city’s second city
hall which is now St. Lawrence Market.

Another good example
is the Martin Goodman Trail, named in memory of the former president and
editor-in-chief of the Toronto Star who passed away in 1981. The trail
is part of the 730-kilometre Waterfront Trail stretching from Niagara to
Quebec along Lake Ontario and the St. Lawrence River.

Sometimes the
street-naming policy simply doesn’t work. The worst example, in my
opinion, is Scarborough’s Mike Myers Dr., named after the lead actor in Wayne’s World, three Austin Powers films and the memorable (not!) So I Married An Axe Murderer.

But kudos to those responsible for naming Aerodrome Cr. and Brian Peck Cr.