Editor's Note: Mon Morning Interest Rate Update appears weekly on this blog - check back every Mon for analysis that is always ahead of the pack.

The central bankers who administer monetary policy for the world’s largest economies have been whipping up potent cocktails that combine ultra-low interest rates with quantitative easing (QE) programs and other creative forms of monetary policy stimulus since the start of the Great Recession.

Most market watchers have predicted that the unprecedented scope and scale of this monetary largesse would eventually trigger significantly higher inflation, as measured by the Consumer Price Index (CPI). But so far it hasn’t happened. In fact, more often than not, these ultra-loose monetary policies have corresponded with falling CPI inflation.

Today’s question is: Why?

Let’s start by explaining why it is intuitive to expect that money printing should lead to higher general inflation.

Assume that we all wake up tomorrow to find twice as much money in our bank accounts as we had the day before. You can bet that many of us would start spending that extra money, and it wouldn’t be long before that surge in demand led to shortages which would in turn lead to higher prices.

While this is a basic example, it describes the same phenomena that were expected to occur when central banks started injecting newly created money into their economies. But in the real examples there were several key differences. First and foremost, the institutions that had access to that extra liquidity did not use it as the central banks had hoped. Instead of circulating this newly printed money into their economies, the recipients have either kept it on their balance sheets or used it for non-productive purposes (such as making speculative investments in hard assets). And this trend isn’t just confined to newly printed money. We have seen a general slowing in the circulation rate of all money in the world’s largest economies. 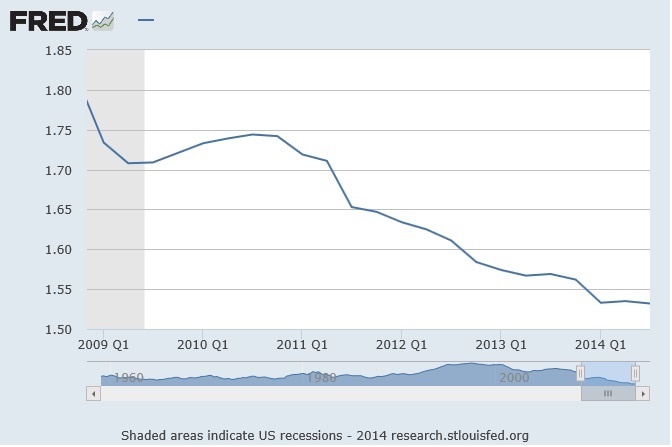 To put this chart in perspective, U.S. M2 is now at an all-time low, and the charts measuring money velocity in the euro zone, Japan and China all show this same trend of slowing rates of money circulation.

So if money printing isn’t creating CPI inflation because the velocity of money is slowing markedly, the next logical question is why isn’t money circulating as quickly anymore?

The answer brings us back to a familiar topic: Debt.

Both the quantity and quality of debt contribute to the rate at which money circulates throughout an economy. When debt is primarily used to finance the purchase of a productive asset that generates income, then it effectively reproduces money and acts as a fuel for economic growth, which accelerates money velocity. But if debt is primarily used to purchase non-income producing assets, like houses, then it does not reproduce money and instead acts as a drag on future growth, which decelerates money velocity (and causes the price of these assets to rise, as we have seen).

Most of the new money that has been printed by the central banks of the world’s largest economies has been used (if at all) to purchase non-productive assets, and this exacerbates an existing problem. Today, the world’s largest economies have way too much non-productive debt, and this overhang is constricting both the velocity of money and overall economic growth rates. Dr. Lacy Hunt of Hoisington Investment Management recently observed that the relative aggregate debt-to-GDP levels of the U.S. (334%), euro zone (460%) and Japanese (655%) economies are consistent with their relative levels of money velocity. He concludes that as velocity slows, so too does economic growth, in a self-reinforcing cycle that money printing is powerless to break.

Interestingly, as economy’s slow there are still calls for more QE from central banks in response. This  reminds me of the familiar adage that the definition of insanity is doing the same thing over and over again and expecting a different result each time.

Now let’s ask the most important question for my readers: What does this mean for Canadian mortgage rates?

The first objective of every central bank is to maintain price stability, which it does first and foremost by controlling the rate of inflation, and we know that a general rise in inflation cannot be created without an increase in the velocity of money. We know that massive levels of debt are keeping the velocity of money at record lows in the world’s largest economies, while also constricting economic growth.

Thus, these staggeringly high debt levels must be dealt with in some fashion before we see money velocity and economic growth rates increase, and this isn’t a problem that can be solved without some form of pain. It will take fiscal reform (politically difficult), default (economically devastating), or a gradual eroding of the value of debt through inflation (unsuccessfully attempted with money printing).

Frankly, it’s not clear to me how the world’s largest economies will get out of the mess they are in but if past is prologue, we can assume that central bankers will continue to avoid hard choices until the markets ultimately decide for them. In the meantime, it seems highly unlikely that central banks will raise short-term interest policy rates, on which variable-rate mortgages are based, since there is little threat of higher overall inflation. And against the current backdrop of ultra-low policy rates combined with benign CPI inflation, I don’t foresee too much upward pressure on longer-term bond yields, on which our fixed-rate mortgages are priced.

The Bottom Line: My explanation above is a simplified version of some very complex economic theory but the basic principles are sound. Monetary-policy stimulus has not generated significantly higher overall inflation because there has been a slowing in the rate at which money is circulating throughout the world’s largest economies. This slowing has been caused by massive debt levels, which also constrict economic growth. In the current environment, inflation should remain well contained and this should keep our mortgage rates at or near current levels until these underlying factors look materially different than they do today.