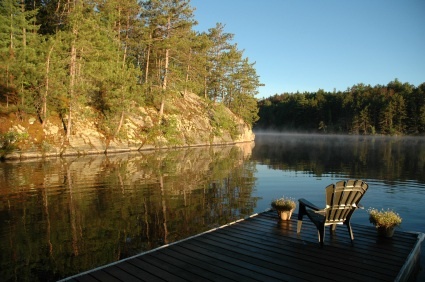 Missing the boat on waterfront laws

Under provincial law, the bottom of any navigable lakes or rivers typically belong to the Ontario Crown, and no docks or boathouses with foundations sitting on the bottom of a lake can be built without permission of the Minister of Natural Resources (MNR).

But what if a floating boathouse is constructed on a lake in front of a cottage, and anchored not in the lake but by a steel cable attached to the shoreline? Is it legal?

That was the question facing Justice Paul Perell in an action brought by Toronto lawyer Barry Glaspell against the Ontario government, the township of North Kawartha, and his cottage neighbours Richard and Margaret Hart.

Justice Perell’s decision, released June 18, begins by quoting at length from a 2012 Toronto Star article by the late Barbara Turnbull.

“Barry Glaspell and Christine Elser bought their three-bedroom wilderness dream on Big Cedar Lake in 2007, enchanted by the pristine beauty and tranquility of the area. The realtor assured them that no boathouses or modern encumbrances were allowed on the lake, which they share with 127 other cottagers.

“Their rude awakening came early last summer in the form of a 1,000-square-foot dock on their next door neighbour’s waterfront, anchored by steel cables, mere metres from their property line, the first such development on the lake. Within weeks, a large boathouse – they liken it to a suburban garage – had been erected over it, with an open sitting area on the far side.

“The Glaspell-Elsers’ dismay turned to frustration when, following repeated calls to the municipality of North Kawartha and Ministry of Natural Resources, it became clear that neither level of government would take responsibility. ….”

Unhappy with the presence of his neighbours’ boathouse interfering with his sight lines, Glaspell sought to have the Harts’ structure removed. He asked the court to declare that the Building Code Act applied to boathouses built over the beds of Ontario lakes, including Big Cedar Lake.

He also asked the court to confirm that the Harts’ floating boathouse which was anchored to the shoreline contravened the local bylaws and that it required work and occupancy permits issued under the authority of the Public Lands Act.

Evidence introduced at the court hearing showed that the MNR’s position was that since the structure was floating, did not physically touch the lake bed, and did not occupy more than 15 square metres of shore lands, it did not require a permit under the Public Lands Act.

The judge left it to the MNR to decide whether to grant a permit to the Harts.