Canadian Variable Mortgage Rates Rise for the First Time in Over Seven Years. What’s Next?

The Bank of Canada (BoC) raised its overnight rate by 0.25% last Wednesday, as expected, and lenders wasted no time in increasing their prime rates, on which our variable-rate mortgages are priced, by the same amount.

The key question now is what happens next? Should we expect more increases by the BoC at their upcoming meetings? Or will the BoC adopt a more cautious wait-and-see approach? How will our economy, with its newfound momentum still far from assured, respond?

In today’s post we’ll look at the highlights from the latest BoC statement that accompanied its rate hike, and I also recommend a review of the Bank’s latest Monetary Policy Report (MPR), which gives us the BoC’s latest assessment of the current economic conditions at home and abroad, and offers forecasts on what lies ahead. If you’re trying to figure out what the BoC will do next, the MPR provides important clues.

Highlights from the BoC’s Post-Meeting Statement

Financial markets interpreted the BoC’s statement as being generally hawkish, meaning that investors believe that more policy-rate hikes may be imminent, and the futures market now puts the odds of another BoC rate increase later this year at about 75%.

Government of Canada (GoC) bond yields continued to rise in response, and they took our fixed mortgage rates along for the ride. Canadian lenders increased their fixed rates again after the BoC’s announcement on Wednesday, with five-year fixed rates rising by another 0.20% on average.

The contrarian in me believes that now is a good time for a few important reminders: 1) Forecasting is a tough task on the best of days, 2) The BoC, along with just about every other central bank on the planet, has been way off the mark with its projections since the start of the Great Recession in 2008, and 3) the BoC projects current prices and exchange rates into the future when making its forecasts, and is wedded to this approach even in cases where a material change is easy to foresee and where it will have a significant impact on BoC’s outlook.

Let me expand on that last point because as I read the BoC’s latest MPR, I grew frustrated by the Bank’s failure to address the elephant in the room.

When the BoC developed its latest economic forecast the Loonie was trading at 76 cents against the Greenback. The Bank projected this exchange rate into the future, even though it knew full well that its policy-rate rise would push the Loonie higher.

The BoC blissfully assumed that a relatively cheap Loonie would continue to act as a stimulus for export demand that would eventually lead to increased business investment and a rise in employment – fuelling a self-reinforcing cycle of economic prosperity and renewal.

But to the surprise of no one, the Loonie hasn’t stayed at 76 cents. It closed at 79 cents on Friday and if the BoC hikes rates again, it will soar higher still. 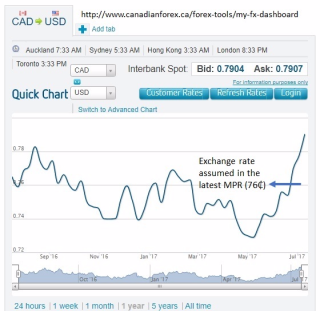 Our exports picked up in the first half of this year as the Loonie fell from about 76 cents to 73 cents. But since May, it has shot 6 cents higher, which is an increase of 8% in a little more than two months (see chart on right).

Last week, Economist David Rosenberg estimated that the run-up in the Loonie since Deputy BoC Governor Wilkens delivered her policy-shifting speech on June 12 has been economically equivalent to another 1.50% in rate increases by the BoC. Yet the Bank made no allowance for this in any of its forecasts. (And we wonder why these have been so consistently off the mark?)

If exports are negatively affected by the Loonie’s rise, and it is reasonable to assume that they will be, it appears that it will be a surprise to the BoC, which didn’t even list the soaring Loonie as one of the main risks to its outlook at the end of the MPR.

To be fair, the BoC knows that if their forecasts project a higher Loonie, that alone will push it higher, so they are stuck between a rock and a hard place. But ignoring the impact of exchange-rate fluctuations in the current environment, where export-led growth is the key to our continued recovery, is turning a blind eye toward a critical input.

It is clear that the developed world’s central bankers are now very keen to raise interest rates. They are obviously concerned about the instability risks that have accumulated over this extended period of ultra-low rates, and that means that they are bound to view the incoming data through a hawkish lens. But if they really will continue to be “guided by incoming economic data”, I believe that data may stay their hand on the rate-rise lever for longer than the markets currently believe.

Five-year GoC bond yields rose by four basis points last week, closing at 1.51% on Friday. Five-year fixed-rate mortgages are still available at rates as low as 2.54% for high-ratio buyers (but probably not for much longer), and at rates as low as 2.89% for low-ratio buyers, depending on the size of their down payment and the purchase price of the property. Meanwhile, borrowers who are looking to refinance should be able to find five-year fixed rates in the 2.99% to 3.09% range.

The Bottom Line: The BoC raised rates last week and sounded generally hawkish about the prospect of doing so again in the near future. But our economic data should still have something to say about what happens next, so we’ll keep an eye on key statistics like average wages, hours worked, inflation measures and the value of the Loonie. As always, the devil is in the detail.