Rate Hikes Are Now a Virtual Certainty In Both Canada and the U.S. After the Release of the Latest Employment Data

The latest Canadian employment data handily beat consensus estimates once again, and the futures market is now assigning a 96% probability that the Bank of Canada (BoC) will raise its overnight rate by 0.25% when it meets this Wednesday.

Not to be outdone, the latest U.S. employment headline number also beat expectations and investors are now assigning 97% odds that the U.S. Federal Reserve will raise its policy rate by another 0.25% at its next meeting later this month.

Let’s start by taking a quick look at the latest employment report highlights for both countries:

Financial markets expect that the latest Canadian and U.S. employment reports will embolden the BoC and the Fed to follow through on their planned policy-rate rises. The unknown at this point is how our respective economies will respond to this monetary-policy tightening.

The BoC rate rise will be the first in more than seven years, and if the Loonie continues its rise in response, that will intensify a headwind for our export-manufacturing sector, which has only recently shown signs of recovery. 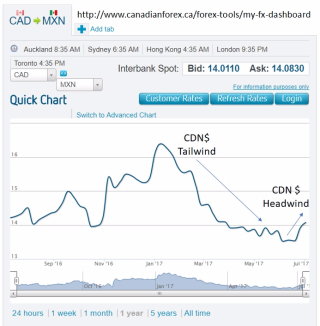 We talk a lot about the Canada/U.S. exchange rate but perhaps the Canada/Mexico exchange rate should be getting more attention. After all, our exporters compete with Mexican equivalents for U.S. import demand and we are both members of NAFTA.

The chart on the right shows that the Canadian dollar fell against the peso over the first half of 2017, giving our exporters a boost, but that trend has recently reversed.

It will take time for the impacts of this reversal to show up in the economic data, but when they do, they will be negative, and additional BoC rate increases after July will exacerbate their magnitude.

Five-year GoC bond yields rose by seven basis points last week, closing at 1.47% on Friday. Five-year fixed-rate mortgages are still available at rates as low as 2.39% for high-ratio buyers (but probably not for much longer), and at rates as low as 2.54% for low-ratio buyers, depending on the size of their down payment and the purchase price of the property. Meanwhile, borrowers who are looking to refinance should be able to find five-year fixed rates in the 2.79% to 2.84% range.

The Bottom Line: Variable-rate borrowers can expect to see their prime rate rise from 2.70% to 2.95% when the BoC meets this Wednesday. While rate predictions never come with guarantees, I continue to believe that existing variable-rate borrowers who exercise their option to convert to fixed rates today will pay more than those who ride it out. Meanwhile, fixed mortgage rates have risen by about .20% in the lead up to this week’s meeting, and the market’s reaction to the BoC statement that accompanies its policy-rate increase will determine which direction they go from here.