Market watchers are currently engaged in a spirited debate about whether the Bank of Canada (BoC) will continue to raise its policy rate in the near future. In last week’s post I explained why the Loonie’s recent movements against a basket of other currencies make more near-term BoC rate rises unlikely. In today’s post we’ll take a detailed look at the latest inflation data, which I believe further bolsters that view.

When the BoC raised its overnight rate by 0.25% in each of July and September, it justified these increases by saying that it must “anticipate the road ahead”. The Bank believed that our improving economic momentum would lead to higher inflation. It wanted to raise its policy rate pre-emptively to help ensure that inflation didn’t accelerate to a degree that would require more severe (and economically disruptive) monetary-policy tightening farther down the road.

This forward-looking approach to inflation initially appears consistent with the BoC’s mandate “to conduct monetary policy to promote the economic and financial well-being of Canadians … by keeping inflation low, stable and predictable.” But the Bank’s mandate also requires that its inflation-targeting approach be “symmetric”, which, in the BoC’s words, “means that the Bank is equally concerned about inflation rising above or falling below the 2 per cent target”, and on that front, its actions belie its words.

Here is a graph of our overall inflation rate since the start of the Great Recession as measured by our Total Consumer Price Index (CPI).

Our overall inflation has spent most of the past five years well under the BoC’s 2% level, but I don’t recall the Bank expressing much, if any, concern about below-target inflation over that period. In the current context, if the BoC is equally concerned about both below- and above-target inflation, shouldn’t our most recent CPI data leave it more concerned about the former than the latter?

Let’s take a closer look at the August CPI data that we received last week using the three core CPI measures that the BoC has primarily focused on since October, 2016:

CPI-trim is defined as “a measure of core inflation that excludes CPI components whose rates of change in a given month are located in the tails of the distribution of price changes”. In other words, if a specific component of the CPI moves dramatically in a given month, that spike is treated as a one-off and the affected item is excluded from the CPI-trim measure. So if the price of vegetables goes through the roof, CPI-trim will ensure that it doesn’t lead us to misinterpretations about a broader change in underlying inflation.

Here is a chart from the BoC’s website that focuses on CPI-trim over the most recent five years. (Note: the chart has not yet been updated with last month’s data.)

CPI-trim did start to increase from 1.2% in June to 1.4% in August. But if you were tasked with symmetric inflation targeting with 2% as the target, would you be thinking that a third 0.25% policy-rate rate increase would be needed in the near future based on where the yellow is in relation to the dotted red line?

Overall CPI tracks changes in the price of a wide variety of items but some prices move up or down more than others. CPI-median filters out item-specific volatility just as CPI-trim does but in a different way. CPI-median plots the monthly percentage change in the price of each CPI item on a scale and isolates the price change of the item at the mid-point of that scale as the CPI-median.

To put this in a practical context, if the price of a few items spikes dramatically in a month when the price of most items remains relatively stable, overall CPI would move higher while CPI-median will capture the change in the price of the item at the mid-point of its scale, thereby eliminating the distorting impact of the more volatile elements. (Here is a short video from the Cleveland Fed on the topic that you might find useful.)

Here is chart from the BoC’s website that focuses on CPI-median over the most recent five years. (Note: the chart has not yet been updated with last month’s data.) 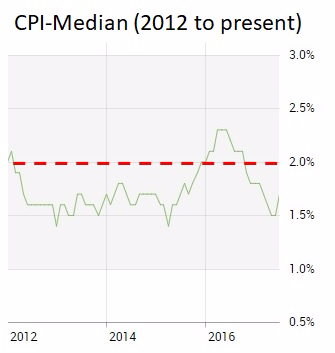 CPI-median was flat for August at 1.7%. While that number is at least close to the BoC’s overall 2% target, it should be noted that the range for CPI-median has tended to be higher than the range for the other core CPI measures. For example, CPI-median stayed above 2% for ten months ending in October, 2016, while Total CPI was well under 2% for nine of those ten months.

CPI-common is defined as “a measure of core inflation that tracks common price changes across categories in the CPI basket”. Of the three new gauges, this one is the most complicated to explain. In essence, it tries to identify and measure the changes in price movements that are related to overall changes in aggregate demand, rather than to sector-specific changes.

Here is a chart from the BoC’s website that focuses on CPI-common over the most recent five years. (Note: the chart has not yet been updated with last month’s data.) 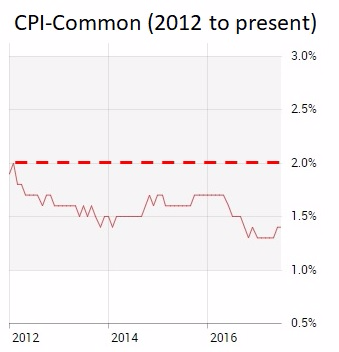 CPI-common rose 0.1% to 1.5% last month but this core CPI measure moves gradually and within a fairly tight range (staying between 1.3% and 1.7% over the past five years) so it seems unlikely that it will suddenly be threatening the 2% threshold in the near future.

In summary the BoC’s stated belief that our economy now needs tighter monetary policy because higher inflation is imminent is controversial because our inflation measures have spent almost all of the past five years below the Bank’s 2% target. Furthermore, the traditional models that the BoC has historically relied on to determine when tighter monetary policy is appropriate have proven less reliable since the start of Great Recession – and that increases the risk that the Bank may have misread the current economic tea leaves.

If the BoC shares any of that doubt, it is likely to hold off on additional rate rises at least until the CPI data show a much more convincing inflationary uptrend.

Five-year Government of Canada bond yields rose ten basis points last week, closing at 1.82% on Friday. Five-year fixed-rate mortgages are still available at rates as low as 2.84% for high-ratio buyers,  and at rates as low as 2.89% for low-ratio buyers, depending on the size of their down payment and the purchase price of the property. Meanwhile, borrowers who are looking to refinance can find five-year fixed rates in the 3.24% to 3.34% range.

The Bottom Line: The August CPI data showed a mild uptick in inflationary pressure but all of the BoC’s main indicators remain below its 2% target. Therefore, if the Bank holds true to its mandate and applies a truly symmetrical approach to its inflation targeting, our mortgage rates shouldn’t be moving higher until our inflation data are in a much more convincing uptrend.