The Bank of Canada (BoC) has increased its policy rate twice over its last two meetings and there is speculation that it might raise again before the year is out. But the Bank continues to insist that its policy path is data dependent, and if that is the case, I am doubtful that it will raise again any time soon.

In last week’s post I touched on three significant obstacles standing in the way of additional BoC policy-rate increases in the near future: the surging Loonie, low inflation and lacklustre wage growth.

In today’s post I will explore the first obstacle, the surging Loonie, in more detail and explain how its fluctuations have a direct, significant, and ongoing impact on our mortgage rates. (Apologies for all the charts this week but sometimes a picture really is worth a thousand words.)

To understand how the Loonie interacts with our mortgage rates, let’s start by looking back over the last ten years.

When the financial crisis hit in 2008, the Loonie surged against the Greenback and, not surprisingly, our export volumes fell sharply. That had a big impact on our overall economic momentum because exports account for about one-third of our overall gross domestic product (GDP).

Over a five-year period from 2008 to 2013, the Loonie traded mostly at or above par against the Greenback and that was devastating for our export sector, which sells 75% of everything it produces into U.S. markets. By the time the Loonie dipped back below par on a sustainable basis in 2013, whole swaths of our export sector had been starved out of existence. Because of that, from 2013 onwards it took much longer than normal for our overall export volumes to benefit from the competitive boost of the falling Loonie. 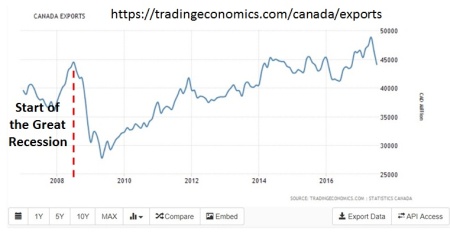 We recently learned that our GDP surged by 4.5% in the second quarter of 2017, and not surprisingly our export sector saw impressive growth over that same period. In fact, the BoC was so impressed that it felt confident enough to claw back the two 0.25% emergency cuts it had made to its policy rate in response to the oil-price shock in 2015.

A look back at how the Loonie performed shows that it weakened against a basket of most major currencies over the first half of this year and in so doing gave our export sector a powerful boost.

The question now is this: If the Loonie’s depreciation had a significant impact on our economic data in the first half of 2017, what impact will its more recent appreciation have on the future economic data that the Bank has assured us it will be depending on when determining whether additional policy rate increases are appropriate?

To better understand the likely impact of the Loonie’s recent movements, let’s take a look at how it has fared against not only the Greenback, but against other currencies it competes with for U.S. export demand.

Here is a chart that shows Canada’s top five exports to the U.S. (by sector) along with a list that ranks the sales volume from other countries that sell these same exports into U.S. markets:

The chart above shows that our exporters have a lot of overlap with their Mexican, Chinese and German counterparts. As such, while the Canada/U.S. exchange rate receives the most attention, movements in our exchange rates with these countries also has a significant impact on our export momentum.

To that end, let’s look at how the Loonie fared against each competing currency in the first half of this year in the run-up to our impressive second quarter, what has happened to those exchange rates since then, and most importantly, conclude with my take on the impact that the Loonie’s fluctuations are likely to have on our mortgage rates in future. 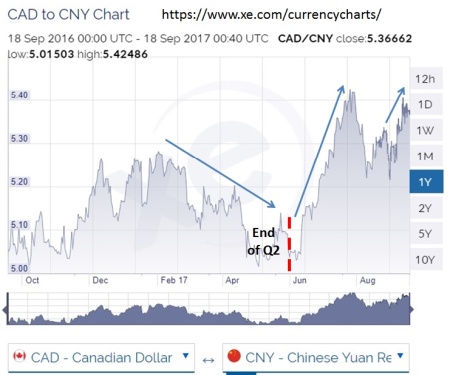 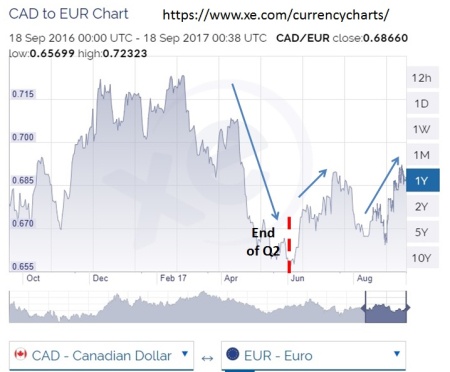 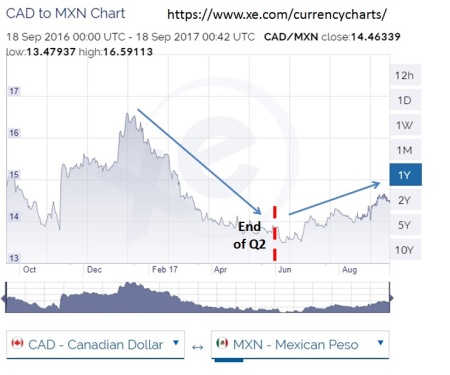 The Loonie fell sharply against each currency in the first half of this year, but since then it has risen against all of them. And the main reason for this?

It seems unlikely to me that our second-quarter momentum will continue unabated because the economic tailwind that was created by the falling Loonie in the first half of 2017 has since turned to headwind. Furthermore, if the BoC continues to hike its policy rate, the strength of this headwind will only grow.

Let’s also take an updated look at the most important chart on this topic.

While Canada vies with other countries for U.S. import demand, it probably competes most directly with U.S. domestic manufacturers. Here is a chart showing the recent history of the Canada/U.S. exchange rate: 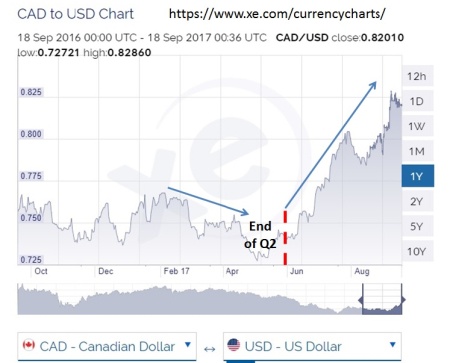 Any guesses on the impact that the Loonie’s recent movements will have on our economic momentum (and our mortgage rates) over the balance of 2017?

Since I’ve gone chart happy today, I’ll close with one more. Here is a look at how our export volumes have tracked thus far in 2017:

Five-year Government of Canada bond yields rose twelve basis points last week, closing at 1.72% on Friday. Five-year fixed-rate mortgages are still available at rates as low as 2.84% for high-ratio buyers,  and at rates as low as 2.89% for low-ratio buyers, depending on the size of their down payment and the purchase price of the property. Meanwhile, borrowers who are looking to refinance can find five-year fixed rates in the 3.24% to 3.34% range.

The Bottom Line: The Loonie’s decline against most major currencies in the first half of 2017 buoyed our export sector and in so doing gave our economy a powerful boost that led directly to tighter monetary policy (and higher mortgage rates). But the interconnectedness of these factors makes additional BoC rate increases less likely because its tighter monetary policy has already demonstrably sharply reversed the Loonie’s momentum and turned what was a powerful economic tailwind into a strengthening headwind instead. That’s why, for the reasons outlined in this post, I think the Loonie will be a significant obstacle to additional BoC rate increases for the remainder of 2017, and if I’m right, our mortgage rates will remain at or near their current levels over that period.