The Least Discussed Risk to Canadian Mortgage Rates in 2018

The consensus continues to believe that the Bank of Canada (BoC) will raise its policy rate by another 0.50% to 0.75% in 2018 but for the reasons I outlined in last week’s post, I think that is unlikely.

(Long story short, I think the BoC wants to allow time for its three recent policy-rate hikes and the most recent mortgage rule changes to work their way into our economy. At the same time, the Bank doesn’t want to push the soaring Loonie any higher and doesn’t want to slow our economic momentum by too much when there is considerable uncertainty about the ongoing NAFTA negotiations.)

While there has been a lot written about the BoC’s expected policy-rate path in the year ahead, there has been very little coverage of another development that has the potential to have an even more significant impact on Canadian mortgage rates in 2018.

After years of monetary-policy interventions on an unprecedented scale, recent central bank actions make it likely that this will be the first year since the start of the Great Recession in 2008 that global liquidity is reduced.

To explain how and why this will impact our mortgage rates, let’s start with a brief review of our recent past.

When the financial crisis first hit, the central banks for most of the world’s largest economies responded by dropping their short-term policy rates to either 0% or within reach of it. The hope was that this stimulus would boost their economies into sustainable recoveries, but that didn’t happen because we were mired in the worst recession since the Great Depression.

When their traditional policy-rate lever proved insufficient, many of these same central banks turned to more unconventional methods, and the most widely used of these was quantitative easing (QE).

In simple terms, QE occurs when central banks create new money and use it to purchase securities such as government bonds or other related assets, like mortgage-backed securities, from financial markets. QE essentially creates artificial demand that pushes bond yields (and interest rates that are priced on them) lower. As rates fall, borrowers feel more comfortable borrowing and liquidity increases. This, in theory, stimulates economic growth.

QE is controversial because it requires a central bank to create money (often referred to as “money printing”) to overwhelm natural supply/demand forces that normally co-exist in delicate balance, thereby raising the risk of adverse side effects, like asset and credit bubbles.

These risks are magnified today by the sheer scale of QE that has been used since 2008. For example, the graph below (courtesy of www.econbrowser.com) shows the amount and type of assets that were purchased by the U.S. Federal Reserve between 2008 and 2015 causing its balance sheet to explode from $500 billion to $4.5 trillion. 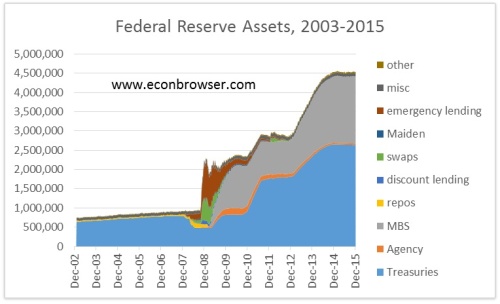 As you can see in the chart, the Fed stopped buying new assets in October 2014, but after that date, when bonds that the Fed owned reached their maturity dates, it rolled over, or reinvested, the proceeds into new bonds of the same type. By doing this, the Fed maintained the liquidity (and artificial demand) that it had previously injected into financial markets.

To be clear, the Fed isn’t going to actively sell off its bond portfolio, it is simply going to let some of its bonds mature and take the cash it receives from those expiring bonds out of circulation. This is referred to as quantitative tightening (QT).

The Fed is forecasting that any market impact from QT will be minimal, but that view is a bit of a head scratcher. If the Fed believes that QT’s impact will be minimal, why did it think that QE would be effective? After all, leverage works both ways.

Fed Chair Janet Yellen has acknowledged that there is no precedent for QT and many experienced market watchers believe the Fed’s $450 billion liquidity withdrawal will push bond yields higher as the bond market’s supply/demand balance is recalibrated. (After all, when the Fed doesn’t renew a bond, the borrower needs to refinance that debt through a different buyer, and if there is less overall demand, the next buyer may well demand a higher yield.)

At the same time that the Fed is ramping up QT, the U.S. Treasury plans to double its net new bond issuance from $357 billion last year to $828 billion in 2018. So over the course of this year the supply of U.S. bonds will increase by about $450 million while the Fed’s support for them will decrease by about the same amount.

Meanwhile, across the pond, the European Central Bank (ECB) announced last October that as of this January, it will reduce the amount of bonds that it buys each month from 60 billion euros to 30 billion euros (more QT). And the Bank of Japan (BoJ) shrank its balance sheet in December, marking the first time since 2012 that it did not increase month over month.

To be clear, none of this guarantees that global bond yields, and the mortgage rates that are tied to them, are headed sharply higher. The global economy is still awash in liquidity and aging demographics in most of the world’s developed countries should provide steady and increasing demand for bonds for years to come. Also, if inflation stays low, that will help mitigate any upward pressure on yields.

Simply put, there are many other factors that will play a role in determining where bond yields (and the fixed mortgage rates that are priced on them) will finish the year. But financial markets (and borrowers) have become used to a world where central bank policies suppress natural market forces, and in 2018, that suppression will begin to ease.

The Bottom Line: Although the BoC did not engage in QE in response to the Great Recession, many of the central banks that oversee the world’s largest economies did, and that helped push down government bond yields (and, by association, fixed mortgage rates) around the world, including here in Canada. As those same central banks now slow their QE programs and/or to engage in outright QT, bond yields (and rates) may well move higher in response. While this risk isn’t getting a lot of attention in the mainstream media, it is one that this blogger will be paying close attention to in the year ahead.