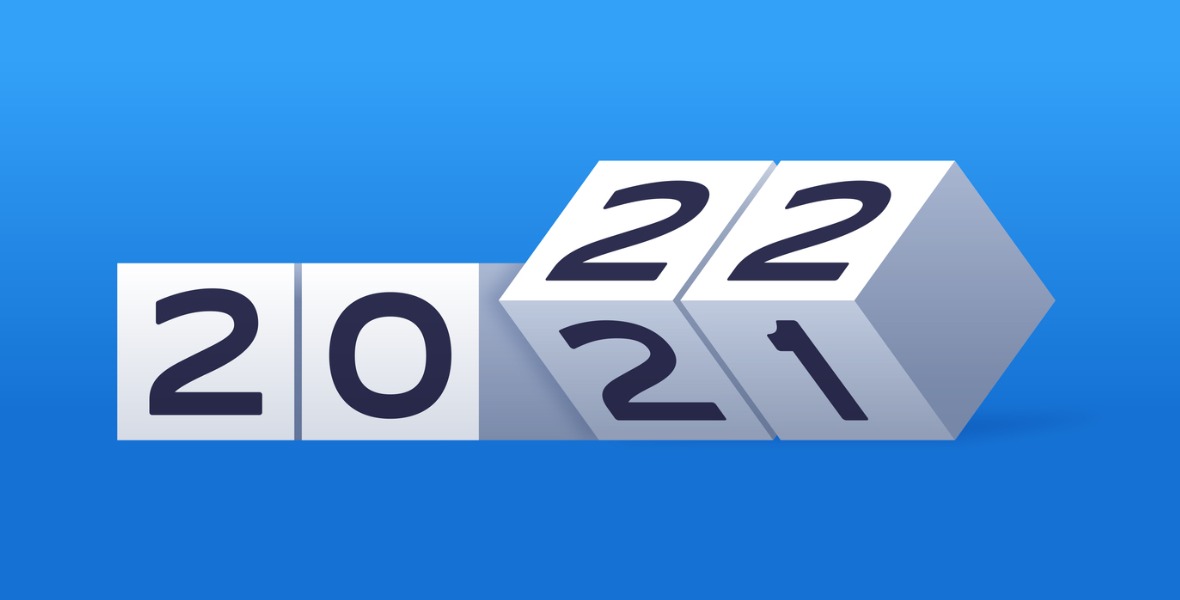 Normally the news quiets down as we head into the holidays, but last week was packed with important updates for anyone keeping an eye on mortgage rates.

Editors Note: This post was originally published on December 20th, 2021

The Latest on Omicron

The latest data on Omicron appear to confirm what was initially suspected – that it is much more contagious, and more able to overcome vaccines.

Our infection rates have spiked, but thus far, thankfully, hospitalizations have not followed suit (see Ontario chart below, courtesy of Ben Rabidoux). 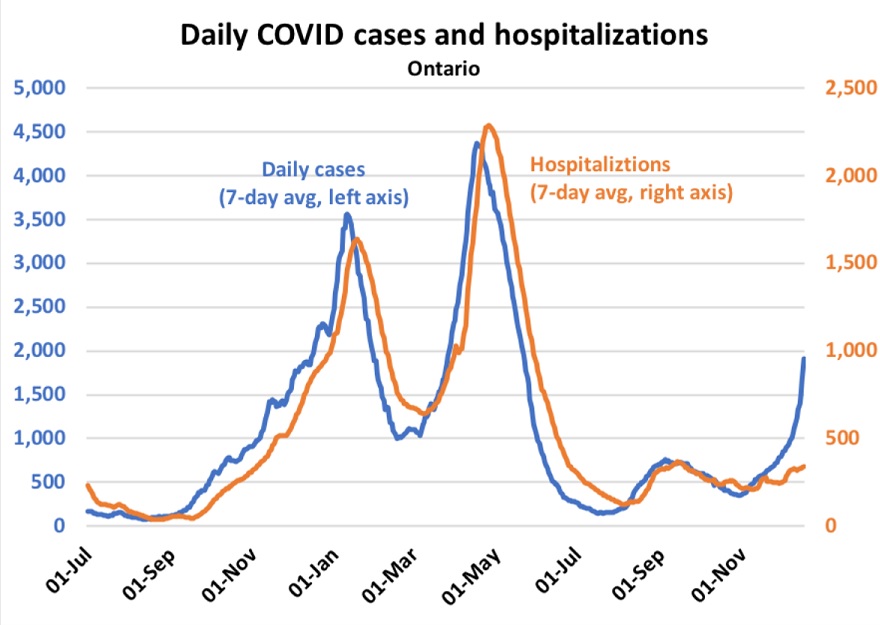 That said, although Omicron’s symptoms appear to be generally less severe, its potential impact is still concerning.

Public-health experts now estimate that we will see a doubling of infection rates every 2.5 days as each new case leads to between 3 and 4 subsequent infections. If we can’t stem the tide, at that alarming rate, even if severe cases are rarer, our hospitals are likely to become overwhelmed.

It is a cruel twist of fate that Omicron’s rise has coincided with the start of the holiday season, when families who didn’t get together last year had planned to reunite. New restrictions are already being announced to a COVID-weary public. Restaurants are now down to 50% capacity, students have been told to clean out their lockers, and full lockdowns, although not currently in place, are back on the table.

Having said that, I think things may be different this time.

Only the most severe restrictions will prevent the spread of such a contagious variant, and if symptoms are mild for the vaccinated population, which appears to be the case so far, the cost/benefit analysis could lead to different decisions.

Our policy makers don’t have nearly as much dry powder left to cushion the negative economic impacts of severe restrictions, and at the same time, the impacts of continued isolation on mental health are significant and rising.

I don’t envy our politicians the choices, and trade-offs, that they will be forced to make concerning our physical, mental, and economic well-being.

Last week the Fed announced that it would taper its quantitative easing (QE) programs more quickly than previously indicated. It now plans to wind up those programs by the end of March, instead of June.

The latest version of its dot-plot chart, which shows each individual Fed official’s forecast for its policy rate, now shows an average of three rate hikes next year, up from two in the previous version.

The bond futures market quickly raised its bet on Fed rate hikes in 2022 from two to three, and the mainstream media reported the Fed’s latest rate-hike forecast as though three increases next year were a fait accompli.

But that seems premature.

The bond market also errs consistently to the high side when forecasting the Fed’s policy rate, as the chart below illustrates.

The Fed assessed that the US economy is “making rapid progress toward maximum employment”, which is noteworthy because the path of the US employment recovery will determine when the Fed starts hiking rates, and at what pace. There is no denying, however, that surging US inflation and increased pressure from financial markets have also reduced the Fed’s flexibility to hold off.

The Fed noted that the strong economic demand experienced this year was “buoyed by fiscal and monetary policy support”. But it didn’t account for the likely impacts that withdrawal of those supports will have going forward. (I suspect they will be talking about those impacts more prominently next year.)

The Fed acknowledged the risks associated with Omicron, but only with a broad statement about increasing uncertainty. Fed Chair Powell said that the new variant won’t have much impact on its tapering plans.

I think he will regret having said that.

Thus far, US policy makers have stopped short of announcing new restrictions or increased testing, even as other countries have lined up to do so. Bluntly put, Omicron is spreading quickly, and delaying a serious response to it in the US will likely prove to be a costly mistake.

Last week Statistics Canada confirmed that our Consumer Price Index (CPI) came in at 4.7% in November on a year-over-year basis, matching its level in October. However, our CPI did increase by 0.2% month-over-month in November, as compared to a 0.7% increase in October, and that means prices, elevated as they still are, are starting to level off.

Gasoline prices, which are notoriously volatile, have surged 44% higher over the past twelve months, but they declined by 0.1% month-over-month. Furniture (+8.7%) and food (4.4%) prices were the other main drivers of year-over-year CPI growth.

If we exclude food and energy prices, the core CPI rose by 3.1% in November year-over-year, which was only slightly above the Bank of Canada’s target range of 1% to 3%. That said, the spread of the Omicron variant and flooding in British Columbia may combine to exacerbate supply-chain disruptions and put increased pressure on prices over the short term.

Importantly, Stats Can noted that average wages rose by 2.8% in November on a year-over-year basis, (well short of our 4.7% CPI increase) and that “Canadians experienced a decline in their purchasing power”. This confirms, once again, that concerns about wage growth fueling a broad rise in prices still aren’t borne out by the data.

The Stress-Test Is Left Unchanged but Other Changes are Likely

The Office of the Superintendent of Financial Institutions (OSFI), our banking regulator, left the mortgage stress-test rate unchanged at 5.25% last week.

There had been speculation that OSFI might raise the stress-test rate to help cool hot housing markets, but that didn’t happen.

That test was designed to ensure that borrowers could afford higher rates at renewal, and raising the hurdle rate to cool demand would have arbitrarily expanded the stress test’s intended purpose.

Also, our newly elected federal government campaigned on promises to help home buyers who have affordability challenges. Raising the stress-test rate would have had the reverse effect.

Instead, borrowers should expect other changes to impact the mortgage market in the months ahead.

Ontario Premier Doug Ford has already promised to increase the foreign home-buyer’s tax if our federal government won’t take the initiative, and there is speculation that other macroprudential changes, such as increasing the minimum down payment required for rental-property purchases, may be in the offing.

The five-year Government of Canada bond yield, which our five-year fixed mortgage rates are priced on, has fallen 0.40% from its peak late last month (see chart).

Normally a big move like that would prompt cuts to five-year fixed mortgage rates, but these rates have increased. While other lender funding costs have likely increased as well of late, it may also be true that lenders are just taking advantage of the opportunity to widen their spreads (perhaps to fund holiday bonuses for their over-worked credit staff).

The most important point is that there is now some air under five-year fixed rates.

If the five-year bond yield remains in its current range and if normal market dynamics prevail, the new year should bring some cuts to five-year fixed rates.