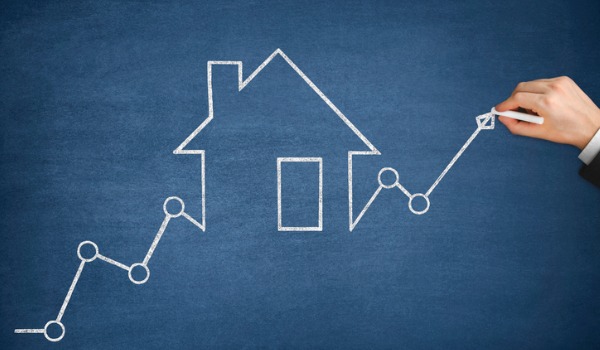 I hope that you all enjoyed a happy Thanksgiving weekend.

There were several mortgage-related developments last week that were worth noting.

1. Good News on Employment is Bad News for Rates

We received the September employment data for both Canada and the US on Friday. The Canadian data weren’t particularly noteworthy, but the US data were stronger than expected.

We have been living in an era where bad economic news has been interpreted as good news for financial markets, because it meant that interest rates would stay lower for longer. Now we are starting to hear some good news, and again it is being viewed as its opposite, because signs of economic resilience increase the likelihood that more rate hikes will be needed to slow growth to a level where inflation can be brought to heel.

In terms of the employment data, while our central bankers are reluctant to admit this bluntly, because it makes for bad PR, policy rates are going to remain high until our labour markets weaken. As market analyst John Mauldin wrote last week: “Enough people need to lose enough income that they will have no choice but to reduce their spending. That means taking away their jobs and/or cutting wages.”

2. Bad News for Inventories Is Good News for Rates

In his speech last week, BoC Governor Tiff Macklem said, “we need to slow spending in the economy so supply can catch up with demand”. 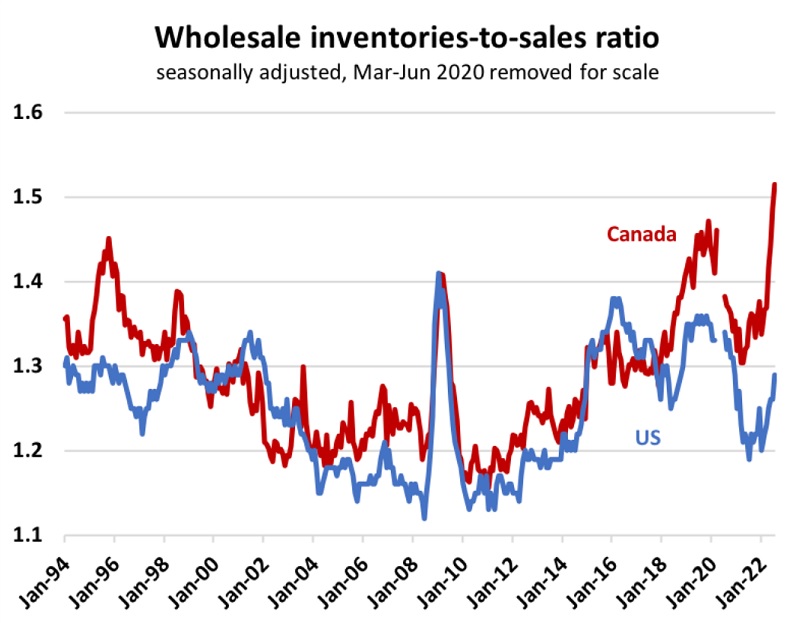 On that note, the chart on the right courtesy of Ben Rabidoux’s Twitter account (which is well worth a follow) shows that inventories at wholesalers have spiked of late.

If you were looking at a graphic representation of our economy’s full sales cycle, from production right through to final sale, wholesale inventories would sit in the middle, in the belly of the snake.

The current spike in wholesale inventories is a sign that demand from retailers (and consumers) is lower than current production rates, and it portends a slowdown in factory orders on the horizon.
In this example at least, supply is catching up with demand.

The mainstream media tend to focus on our overall Consumer Price Index (CPI) as the key gauge of our inflation pressures. That CPI has fallen materially from a peak of 8.1% in June to 7.0% in August and is expected to continue dropping in the months ahead. But overall CPI casts a wide net, and not all the price movements it captures are of equal concern to the BoC. That’s why the Bank is now paying closing attention to more focused core inflation measures, which are less volatile than the headline price noise.

In his speech last week, BoC Governor Macklem noted that “our core measures have yet to decline meaningfully even though total CPI inflation has come down in the last couple of months” and that “we will be watching our measures of core inflation closely for clear evidence of a turning point in underlying inflation.”

Interestingly, up until recently, the Bank’s favourite core-inflation measure was what they call CPI-common, which was designed to capture “the common component in the price changes across many goods and services”. But the BoC recently acknowledged that the measure woefully understated inflation pressures during the pandemic, that it has made significant revisions to its historical CPI-common data, and that the measure is now in the process of being “re-assessed”.

At the same time., Governor Macklem said that the other two key core inflation gauges, CPI-trim and CPI-median, performed well and have proven “more robust to changes in the behaviour of prices … and have been subject to much smaller revisions”.

If you want to keep your eye on the key inflation gauges that will influence BoC policy going forward, these are the ones to watch (and the chart below provides a current snapshot for each).

When the BoC isn’t focused on actual inflation, it is paying close attention to inflation expectations. This makes perfect sense because fear of higher inflation can lead to more actual inflation as part of a self-reinforcing cycle that becomes increasingly difficult (and costly) to break.

During the pandemic, when inflation first started to rise, the BoC acknowledged that consumer and business surveys showed near-term inflation expectations were increasing, but always with the caveat that longer-term expectations remained firmly anchored.

Over the quarters that followed, those two observations were always mentioned together, right up until Governor Macklem’s speech last week. That’s when I noticed his use of a different qualifier in his description. This time he said only that longer-term inflation expectations are now only “reasonably” well anchored.

If that seems like a subtle shift, it isn’t.

The BoC is laser-focused on our consumer and business surveys now because it can’t risk any more increase in longer-term inflation expectations. It must guard against that risk even if the actual inflation data are improving – and it will use hawkish language to bolster its inflation-fighting credibility, even as rates hikes are beginning to bite.

Controlling inflation is only half the goal right now. Convincing the public that it can successfully do so is the other half.

In recent posts, I have been critical of the BoC for propagating the belief that the Canadian economy is likely to achieve a soft landing even as it does what it must to wrest back control of the inflation narrative.

In the past, more often than not, the Bank’s rate-hike cycles have led to recessions, and it is tightening much more forcefully now than it has in past iterations. At the same time, we have record-high levels of debt, and our economy has never been more reliant on residential investment, which is its most interest-rate sensitive sector.

It doesn’t take a PhD in economics to calculate the probability of a sharp economic slowdown under the current circumstances.

On that note, during the Q & A session after his speech last week, Governor Macklem offered a new and more candid assessment of the probability that we’re headed for a recession when he said, “there is a path to a soft landing, but it is a narrow path, and there are risks, and you should be factoring those into your decisions.”

The Bottom Line: Government of Canada bond yields continued to rise last week, as did the fixed mortgage rates, which are priced on them. I expect both of those trends to continue over the short term.

Variable mortgage rate discounts held steady last week, but financial markets continue to price in another 0.50% rate by the BoC when it next meets on October 27.