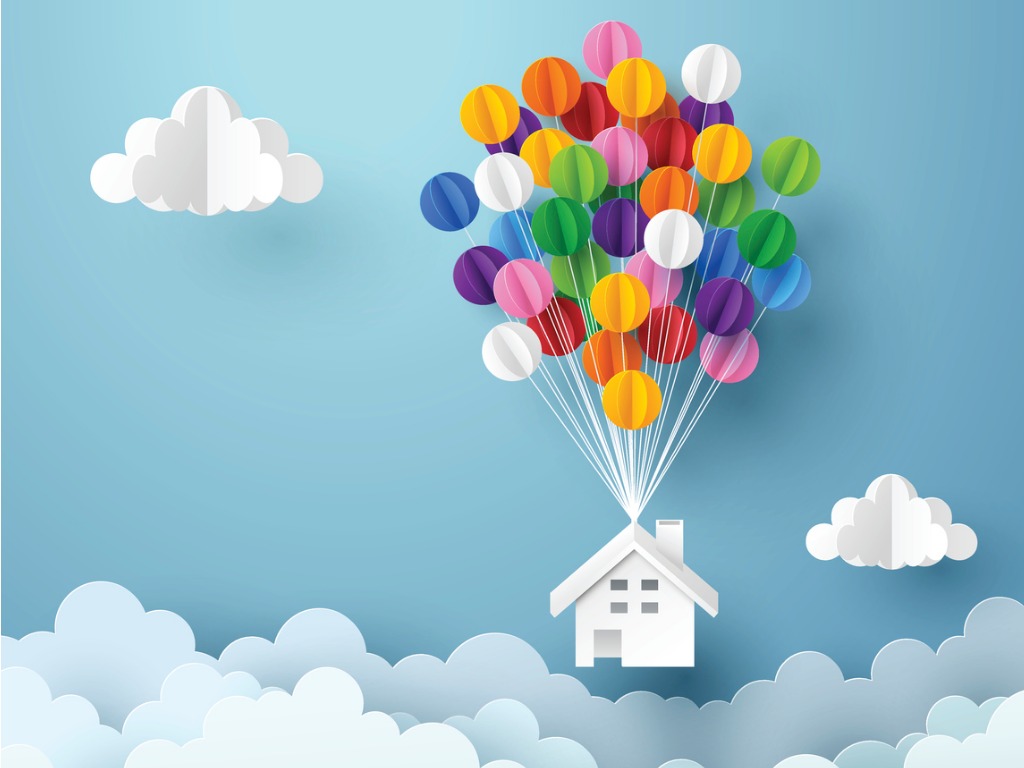 In last week’s post I made the case for five-year variable rates over their fixed-rate equivalents, based on my current view of where our economy is headed.

Today, I’ll simulate three different scenarios for variable rates over the next five years - one where the variable rate saves you money, one where fixed and variable rates break even, and another where the fixed rate wins out. You can then decide for yourself which rate path seems most likely for the years ahead.

Let’s start with a quick outline of the assumptions that I used to run the numbers:

In each simulation we’ll compare the total interest cost of the fixed and variable-rate options, with one additional wrinkle.

I always advise my variable-rate borrowers to make their monthly mortgage payment equivalent to what it would have been if they had taken a five-year fixed rate instead. They can do this by calling their lender and asking them to automatically take an additional monthly payment that is equal to the initial difference between the two rates (which in this case works out to $231). Note that Canadian mortgages typically come with generous prepayment allowances, there is no cost/fee for making additional payments, and they can be cancelled at any time.

Variable-rate borrowers who use their initial interest-rate saving to accelerate their mortgage repayment in this way can significantly reduce their total borrowing cost over time. To illustrate the impact that this make-hay-while-the-sun-shines approach can have, I will add a borrower who uses this trick to each simulation, and we’ll call that borrower Mr. Samar T. Pants. 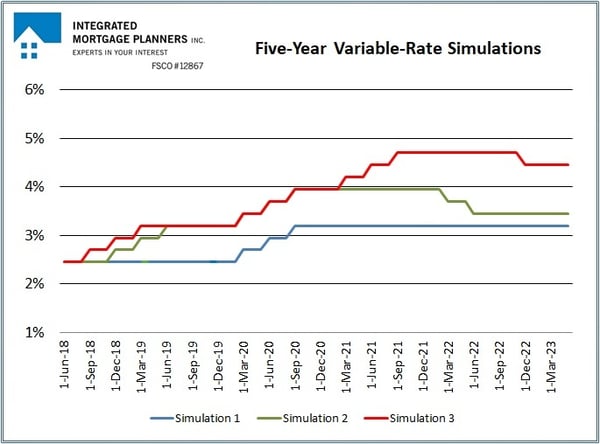 The BoC has used the word caution a lot in recent commentaries, and in simulation #1 we assume that the future unfolds roughly as follows:

Simulation #1 Summary: We assume that the two additional rate increases that the bond market consensus is expecting in 2018 do not materialize. Instead, the BoC waits about two years for the three 0.25% rate increases it made between July 2017 and January 2018 to work their way through the economy (which is how long the Bank has estimated that complete process can take). The BoC doesn’t raise its policy rate again until March of 2020, when it repeats the pattern we saw in 2017, raising a total of three times with about a three-month gap in between each hike. The Bank then allows time for the economic impact of those rate hikes to be fully absorbed.

The chart below summarizes how today’s five year fixed- and variable-rate borrowers will fare under this scenario:

In this simulation the variable-rate saving is significant.

Note: As variable rates rose and his regular payment increased, Mr. Samar T. Pants asked his lender to reduce his extra payment by the same amount each time. This meant that his total monthly payment of $2,369 stayed the same throughout his term. And while his extra monthly payment of $231 got smaller as rates rose, Mr. Samar T. Pants’ mortgage balance is still an additional $8,000 lower at renewal (and that will reduce his interest cost over the remainder of his amortization period).

In Simulation #2 the Canadian and U.S. economies show more resilience than is expected in Simulation #1, and inflationary pressures prove more persistent.

Simulation #2 Summary: We assume that the BoC raises its policy rate by 0.25% three times between this December and next June. Then, as U.S. inflationary pressures continue to rise and we import that inflation over time, the BoC raises by 0.25% three more times between March 2020 and September 2020. After that point, in year four of the borrower’s five-year term (2022), we assume that the cumulative impact from the BoC and Fed rate increases pushes both economies into recession. The BoC then cuts rates by 0.25% in both March and June of 2022. (If the BoC rate cuts seem crazy in the current context, consider that we haven’t had a single five-year period over the last twenty-eight years that didn’t include at least one cut).

In this simulation today’s five-year fixed and variable rates basically break even.

Note: Even though the variable rate rose by 0.25% six times over his term, Mr. Samar T. Pants still ends up with a lower balance at renewal because he used his initial saving to accelerate his mortgage repayment. And Samar T. didn’t actually have to increase his monthly payment until the fourth rate increase (because he reduced his extra payment of $231 to absorb the the earlier increases instead).

In Simulation #2 inflation rears its ugly head and the BoC and the U.S. Federal Reserve have no choice but to hike their policy rates precipitously in response.

Simulation #3 Summary: We assume that the BoC raises its policy rate by 0.25% this September and then again in December and March of 2019. The Bank then pauses to allow those rate increases to work their way into our economy. By early 2020 the BoC decides that more tightening is needed, and it raises again by 0.25% in March, June and September of that year. The same pattern then repeats. The Bank pauses to observe the impact of its rate hikes before raising by 0.25% in March, June and September of 2021. Finally, after nine 0.25% rate hikes, our economy falls into recession and the BoC begins to cut its overnight rate in December 2022.

The chart below summarizes how today’s five-year fixed- and variable-rate borrowers would fare under this scenario:

While Mr. Samar T. Pants no doubt wishes that he had opted for a five-year fixed rate, by setting his initial variable-rate payment as if he had taken the fixed rate, he experienced less payment shock than a variable-rate borrower who just paid the minimum. Samar T. started his payment at $2,369 and it eventually peaked at $2,710, which was an increase of $341/month. Meanwhile, the variable-rate borrower who always paid the minimum saw his initial payment rise by $572/month (and his balance was also $2,500 at renewal).