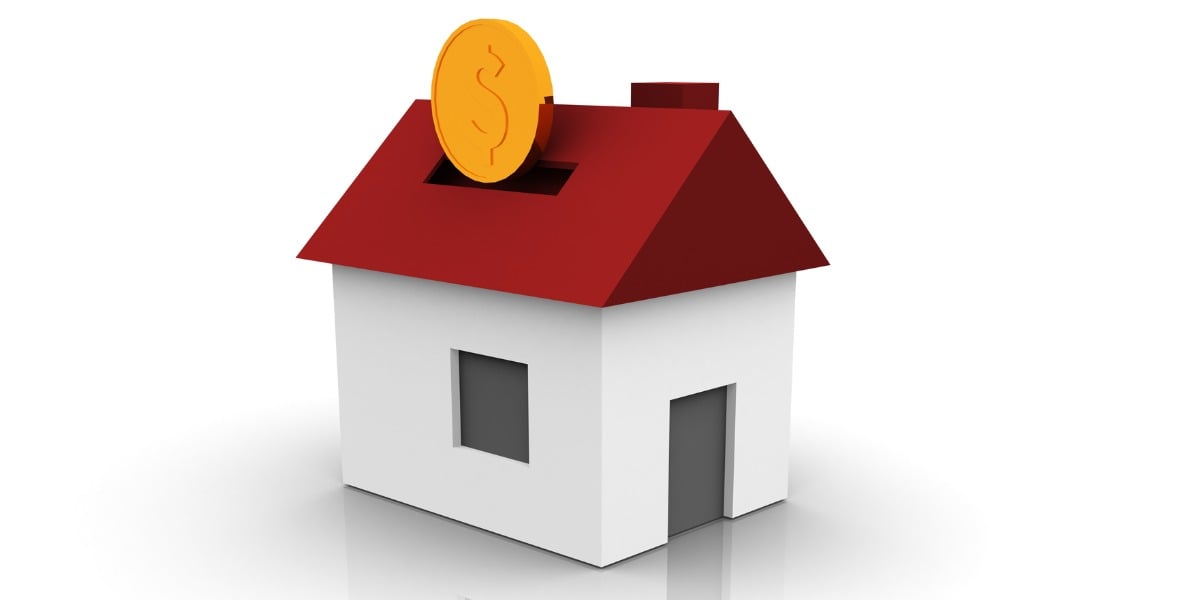 Fixed vs Variable: Which One Is Now the Better Bet?

Five-year fixed rates are now offered in the 4% range, and while five-year variable rates are still offered at discounts of about 1.50% below that, the Bank of Canada (BoC) recently hiked its policy rate by 0.75% and is warning Canadians to “expect further increases”.

Against that backdrop, it’s time for a fresh take on which option is more likely to produce a lower borrowing cost over the next five years.

Let’s start with a review of five-year variable rates, which are currently available in the 2.0% to 2.5% range.

Variable-rate mortgages have proven cheaper than their fixed-rate equivalents for most of the last twenty years, and the three BoC rate-hike cycles that preceded the current one were all minor and relatively short lived.

But this rate-hike cycle is going to be different.

The latest Consumer Price Index (CPI) reading confirmed that inflation roared to 6.7% in March on a year-over-year basis, and recent surveys show that consumers increasingly expect elevated inflation to persist. If they respond by accelerating their purchase plans, because they think prices will be higher in future, that will boost current demand further and push inflation even higher. This can then become a self-reinforcing cycle.

Even more importantly, workers have been demanding, and in an increasing number of cases, receiving, pay raises to compensate for their lost purchasing power. Rising labour costs will lead to more price increases, and that too can create a self-reinforcing loop (commonly referred to as a “wage/price spiral”).

The BoC and other central banks had been willing to tolerate higher inflation until recently because when the pandemic first hit, their main concern was to prevent a repeat of the Great Depression. Back then, BoC Governor Macklem told Canadians that rates would stay low for a long time and that the Bank’s next rate hike wouldn’t occur until “some time in 2023”. And while he was doing that, our federal government was fire-hosing emergency stimulus payments into the bank accounts of anyone who needed them (and quite a few who didn’t).

That combination of ultra-low rates and fiscal largesse supercharged demand while lockdowns were gumming up supply chains. With demand rising and supply reducing, inflation was the inevitable by-product.

Our policy makers initially predicted that the price run-ups would be transitory, which technically means “non-permanent” but which, in that context, was also widely interpreted to mean “short lived”.

By early 2022, it had become increasingly obvious that inflationary pressures would last for longer than previously expected, but even then, bond yields were holding relatively steady and consumer inflation expectations had remained mostly “anchored” (to borrow a term frequently used by the BoC).

But then the global economy was hit with another unexpected broadside.

Russia invaded Ukraine, and prices, especially for food and energy, surged in response.

Suddenly, the key inflation question wasn’t how long it would take for pandemic pressures to ease, but how much higher inflation would go because of Russia’s attack (and nothing pushes inflation up faster than spiking oil prices, which recently topped out at $130/barrel). Bond yields began to surge higher in response, and central bankers found themselves having to play catch up.

The BoC hiked by 0.25% on March 2, and by another 0.50% on April 13. More importantly for anyone in the market for a variable-rate mortgage today, the Bank has also made it very clear that there are more rate hikes to come.

The question that follows is: How many?

The BoC currently estimates that its neutral rate, which is defined as the policy rate that will allow the economy to operate at its full potential while keeping inflation at or near the Bank’s 2% target, is in the 2% to 3% range.

While that is certainly a possibility, here are some other points to consider:

That said, while variable rates have been a slam dunk winner over fixed rates for years now, it must be acknowledged that they come with increased risk against the current backdrop.

While five-year variable rates are still priced about 1.5% below their fixed-rate equivalents, that buffer could easily disappear entirely within the next year. I don’t think that is the most likely outcome, but it is a risk that needs to be considered because it could significantly reduce the longevity of your initial saving.

Also, while lender prime rates have risen in response to the BoC’s policy-rate hikes, the discounts off prime that lenders are offering to variable rate borrowers have also shrunk. A few months ago, a five-year variable rate of prime minus I.00% to 1.40% was widely available, and today the range of discounts has been reduced to the prime minus 0.60 to 1.10% range. So, variable-rate discounts are now shrinking at the same time that prime rates are rising.

Finally, while the BoC will try to avoid driving our economy into recession, its mandate is to preserve price stability above all else, and if push comes to shove, it will do what it must to bring inflation back under control. That invokes the risk of outlier scenarios where the BoC must hike by much more than anticipated to rein in inflation.

Most five-year fixed rates are now offered in the 4% range, a far cry from the 1.5% to 1.75% range that we saw in the depths of our pandemic lockdowns.

If you opt for a fixed rate, you will be paying a higher rate, at least initially, in exchange for the confidence that your payments won’t change over your term. In essence, you are paying an initial premium for rate insurance.

There is wisdom in opting for stability in uncertain times. Most of us already have enough to worry about these days, and if you lock in a fixed rate, your mortgage payment doesn’t have to be one of them.

My only caution to fixed-rate borrowers is to remember that a rate spike in one direction is likely to be followed by a material drop on the other side – and as far as spikes go, the current example is the steepest I can recall in my two decades in the mortgage industry. Simply put, the bond market tends to overshoot during volatile periods. 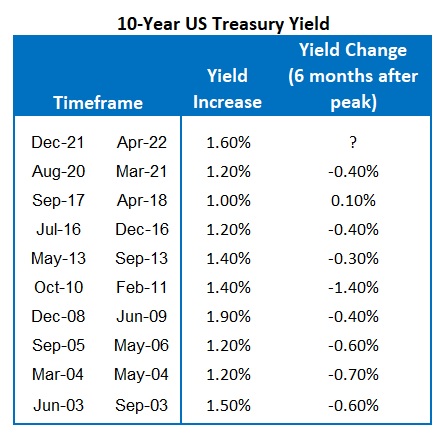 How much of a drop might be in store?

The chart on the right gives you some idea. (This US data came from the most recent Edward Jones Weekly Market Wrap.)

It shows the latest ten examples of what happened to 10-year US treasury yields six months after they peaked.

While the five-year GoC bond yield wouldn’t mirror these results exactly, GoC bond yields move in near lockstep with their US equivalents, and a Canadian chart with the same data would look very similar.

With that in mind, the most important advice I can give to any fixed-rate borrowers today, and I can’t stress this enough, is to ensure that your mortgage contract includes a fair break penalty (which you can learn more about in this post). Regular readers of my posts know that break penalties vary hugely from lender to lender.

That way, if rates do drop on the other side of the current inflation related run up, as I expect they will when the pandemic and war in Ukraine are eventually behind us, you will be able to take advantage.

To use a recent example of the potential savings, fixed rates were offered at about 3% as the pandemic hit, but then fell all the way down to the 1.5% range.

Borrowers with fair penalty mortgage contracts took advantage and refinanced. They locked into new five-year terms at much lower rates, saving thousands in interest. Conversely, other fixed-rate borrowers had such onerous penalties in their mortgage contracts (from a Big Six bank) that they couldn’t take advantage of that opportunity.

Now let’s circle back to the key question this post will try to answer: Which option is more likely to save you money over the next five years?

While I am not as confident in this call as I was when the BoC was promising Canadians that they could count on rates staying low for a long time, I still think variable rates are likely to win out, although with less potential saving than had been available previously.

I have no doubt that the BoC will continue to raise its policy rate until it is confident that inflation expectations are once again well anchored and until inflation returns to the Bank’s target range of 1% to 3%. But I also think that it will take fewer hikes than the market is currently pricing in to achieve those objectives and that there is also a good chance that this rate-hike cycle will drive our economy into recession, forcing the Bank to start cutting its policy rate thereafter.

Rate call aside, it is also important to remember that variable-rate mortgages come with much more flexibility.

Most can be broken with a penalty of only three months’ interest. They are convertible to fixed at any time. Some variable-rate mortgages come with fixed payments that won’t increase until the minimum payment no longer covers the interest cost, which would happen when the rate increased by about 3.5%. (Variable rates are also easier to qualify for, but I would advise stretched borrowers to lean heavily toward fixed rates regardless of their interest-rate expectations.)

The current volatile environment makes this a particularly difficult time to nail a rate forecast, but my view is that while variable rates will continue to rise over the near term, they are still likely to prove cheaper over the next five years.

The Bottom Line: The five-year GoC bond yield continued to rise last week, as did the five-year fixed mortgage rates that are priced on it.

At some point this bond yield will rise to a level where it attracts more buyers, and that increased demand will cause it to moderate. But we don’t appear to be there yet, and for now the momentum for yields and rates is still pointing up.

Variable-rate discounts shrank a little more last week, and that, combined with the BoC’s warning that Canadians should expect higher rates, means that the current gap of about 1.5% between today’s fixed and variable rates could soon reduce significantly.

Despite that, and for the reasons outlined above, I still think that variable rates are more likely to be cheaper over the next five years (although that saving looks to be smaller now than it did only a few short months ago).