Buyers considering using a property  as an airbnb rental should have a viable “Plan B” based on long-term rental.

Update: As the result of a municipal council decision on October 9th 2018, Prince Edward County will regulate short term rentals like Airbnb’s. The regulations will grandfather existing rentals, but freeze the number of rentals in popular areas like Wellington and Picton. Read update here

On September 7th, after a year of public discussion, municipal staff released a proposal for comprehensive airbnb regulations for Prince Edward County. If approved, the regulations will significantly change short-term rental business in the County. 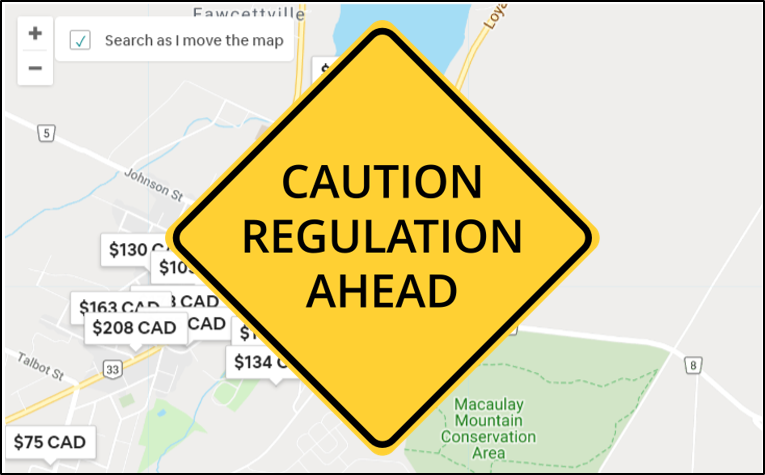 As a result, short-term rentals have become a focal point for political debate.

The municipality’s zoning by-law would be amended to allow short-term rentals in specific zones. Under the current zoning by-law, airbnb’s are not a property permitted use in the County.

Under the new system, airbnb’s will have to obtain a license, where both extent of the regulations and and the license fees increase with number of bedrooms. Some people have already suggested that the license fees could be used to address the affordable housing problem.

Finally, the new regulations would address the concern about community erosion by limiting the density of airbnb’s in the areas where they are permitted. Where there are too many airbnb’s to meet the density regulations, the owners of currently-operating airbnb’s will be grandfathered so that they can continue to operate.

However, under the proposed regulations, the owner is grandfathered and not the property. When the property sells, the new owner will not get a license to operate if there are already too many short-term rentals in the neighborhood. Density targets in neighborhoods with too many short-term rentals will be achieved over time as properties change hands.

Council has scheduled a special public meeting for September 10th to get citizens’ feedback on the draft regulations. Afterwards, the regulations will come back to Council for approval or amendment.

The proposals have not become by-law yet. However, there are several implications for buyers of the proposed airbnb regulations for Prince Edward County.

Anyone considering buying a property for an airbnb for a rental business should have a viable “Plan B” based on long-term rental.

NOTE: The staff report on the proposed regulations for short-term accommodation can be found at https://princeedwardcounty.civicweb.net/filepro/documents/144606?preview=158012 under Agenda item 4.1. The Presentation for this item presents a good overview of the proposed approach. The other document, Report & Supporting Documentation, contains detailed information, particularly the consulting report which starts on page 107.