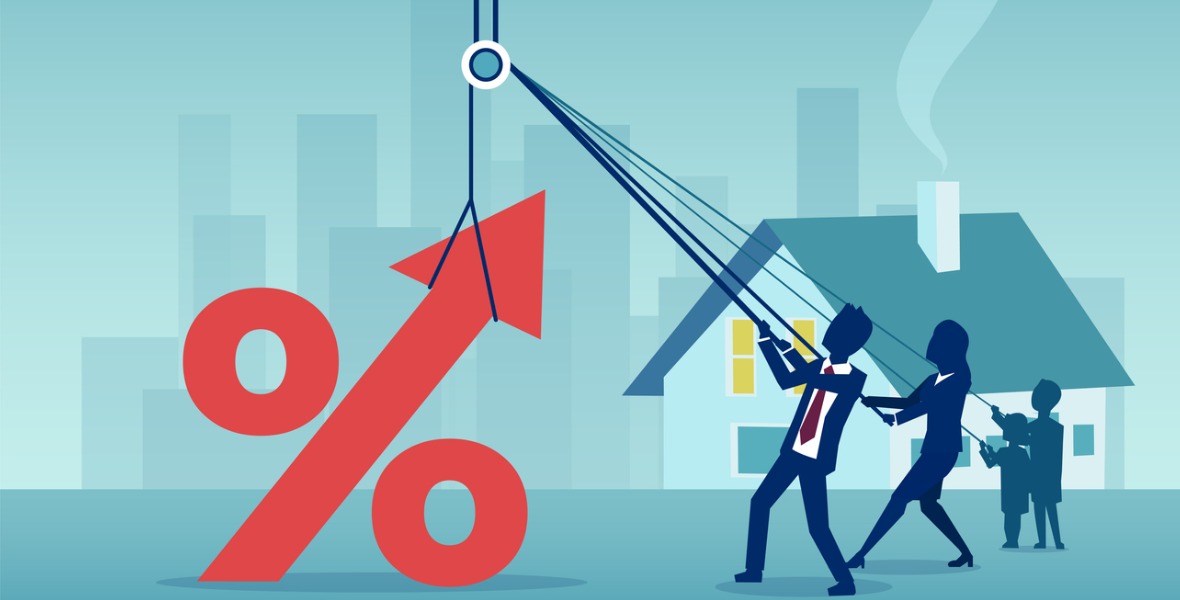 The Bank of Canada Is About to Start Hiking. Now What?

I expect the BoC to hike its policy rate this Wednesday, and in today's post I offer my take on whether variable-rate borrowers should respond by locking in.

The Bank of Canada (BoC) is expected to hike its policy rate by 0.25% when it meets this Wednesday, and if that happens, Canadian variable mortgage rates and lines of credit will rise by the same amount.

The Bank has thus far navigated through our pandemic-induced inflation run up with a strategy best described as “talk tough and drag your feet”.

That approach helped to keep longer-term inflation expectations anchored and bought time for fiscal and monetary-policy stimuli to boost our recovery. But at some point, words must be backed by actions if they are to remain credible, and that time has now come.

This will be the BoC’s first rate hike since October 24, 2018, and additional increases are likely to follow.

The bond market is now pricing in a total of six quarter-point hikes in 2022, and the question on many variable-rate borrowers' minds today is: Should I lock into a fixed rate?

The answer to that question should be primarily determined by each individual borrower’s tolerance for risk because there is no way to know with certainty. But if you are asking strictly from a cost perspective, I continue to believe that variable rates are still likely to save money over their fixed-rate equivalents in the years ahead.

To explain why I write that, let’s start with a look at the current gap between fixed and variable rates.

That 1.50% gap matches the total of the increases the bond market is forecasting over the remainder of this year.

I still think that is an aggressive bet for reasons I’ll get to in a moment, but let’s assume the bond-market consensus has it right. That same consensus is pricing in a recession as well as rate cuts in 2024, because it expects that the BoC will end up over-tightening.

If the consensus forecast comes to fruition, today’s variable-rate borrowers will save money over today’s fixed-rate alternatives for as long as it takes for the current gap to close. At that point the two costs are projected to be roughly equivalent until 2024 when the BoC then cuts, and variable-rates drop back down.

That’s not a forecast that should be keeping long-term variable-rate borrowers up at night.

For my part, while six quarter-point rate hikes in 2022 are certainly possible, I don’t think we’ll get that many.

Our record-high debt levels will magnify the impact of rate rises, and it stands to reason that it should take fewer of them to bring inflation to heel against our current backdrop. (The BoC’s average rate-hike cycle is 1.50%.)

The Bank has acknowledged some uncertainty about the magnitude of each hike, and that, combined with the fact that it takes up to two years for their full impact to materialize, portends a more cautious rate-hike pace.

Let’s also examine the other side of the coin.

Government of Canada (GoC) bond yields, which our fixed mortgage rates are priced on, trade in lockstep with their US Treasury equivalents, and US yields are reflecting different economic conditions than currently exist in Canada. (For example, inflation in the US is currently 7.5%, and it stands at 5.1% in Canada.)

The gravitational pull of US Treasury yields is taking our bond yields along for the ride, and that has made their recent rise more dramatic than would have been the case if those yields more accurately reflected our domestic economic backdrop. That point is worth remembering for anyone who believes that the recent rise in our fixed mortgage rates presages a similar path and pace of increases for our variable-mortgage rates.

Our GoC bond yields, and ultimately our fixed mortgage rates, may be surfing the US Treasury yield curve, but the BoC’s policy rate won’t be. Its path will be aligned to our domestic economic backdrop, which should, relative to the US, require a more gradual pace and more moderate overall tightening.

Consider that the US economy has lower household debt levels (see chart) and much longer fixed rate mortgage terms, both of which will make it less sensitive to rate hikes than the Canadian economy is likely to be (and hat tip to economist Benjamin Tal for that observation). 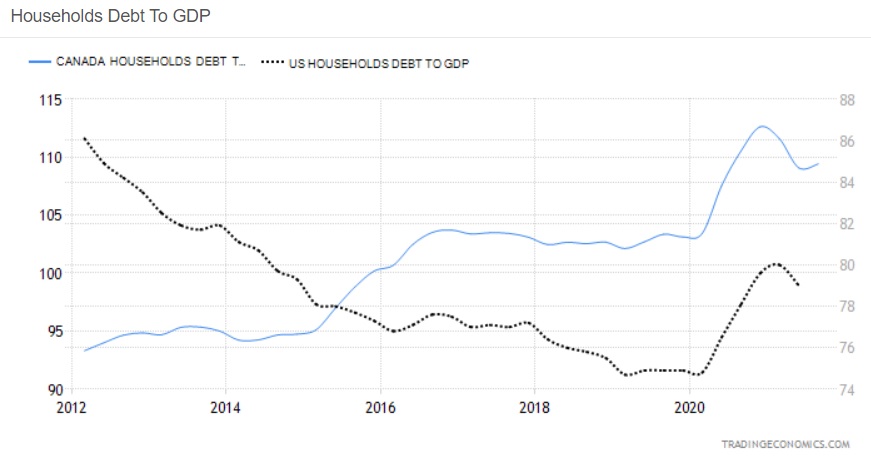 We’ll find out what the BoC thinks on Wednesday.

It knows that the bond market now expects six quarter-point hikes this year and it can use its policy statement to either encourage that belief or, as I expect, tamp down expectations.

With that in mind, put me down for a dovish hike.

The Bottom Line: Bond yields fell late last week in a flight-to-safety response to Russia’s invasion of Ukraine. Geopolitical risks may supersede economic factors over the short term, but notwithstanding that, the short-term momentum arrow for bond yields and fixed mortgage rates is still pointing up for the time being.

I expect the BoC to raise its policy rate by 0.25% this Wednesday, and if that happens, variable mortgage rates will rise by the same amount shortly thereafter.