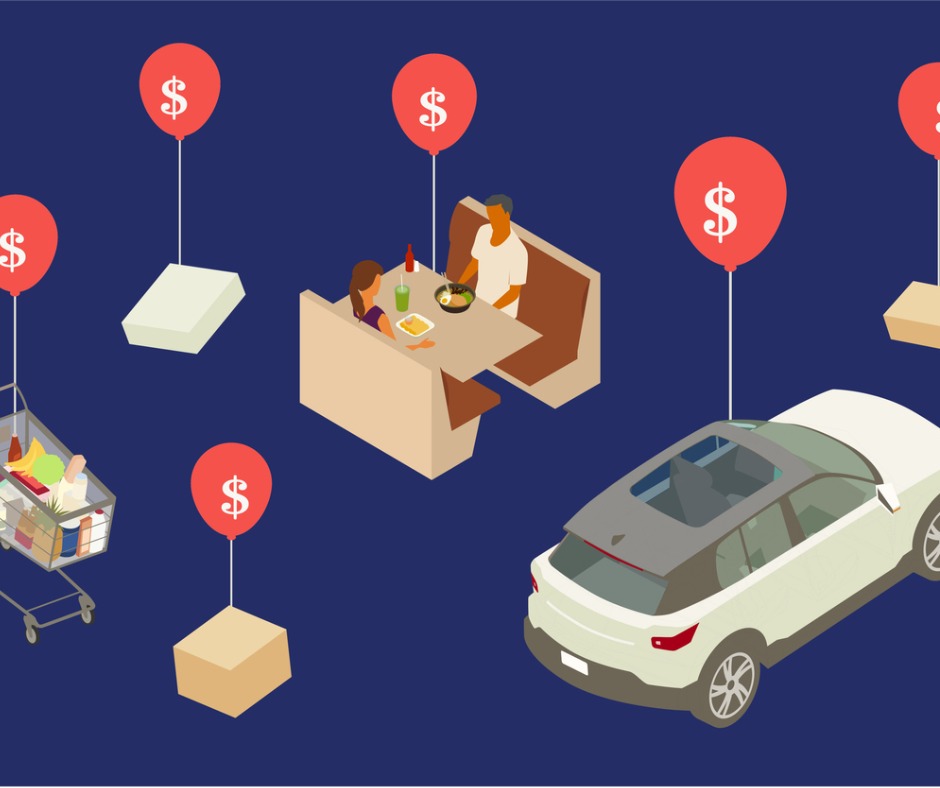 What the US Inflation Surprise Means for Canadian Mortgage Rates

This time the catalyst was the latest US inflation data, for September, which came in higher than expected.

In today’s post I will outline the latest data and explain why they drove bond rates higher. Then I’ll share a few points to support the view that some meaningful inflation relief may finally be on the way before closing with my take on the implications for Canadian fixed and variable mortgage rates.

Let’s begin with a quick summary of the US inflation data for September:

The higher-than-expected US inflation data ratchet up the pressure on the Fed to continue its aggressive rate-hike trajectory.

On that note, the bond futures market is now pricing in a 97% probability of a 0.75% Fed hike at its next meeting on November 2. Last week it also raised the odds of another 0.75% hike at the Fed’s following meeting on December 14 to 70%. (Prior to last week, the futures market favoured a 0.50% hike in December.)

So, in the span of three days last week, we learned that the Fed was going to err on the side of over-tightening, we learned that headline US inflation fell more slowly than hoped, and we learned that core inflation, which the Fed watches more closely, continued to rise last month. (And, for the cherry on the sundae, the International Monetary Fund once again downgraded its global growth forecast for 2023, this time from 2.9% to 2.7% and warned that “the worst is yet to come”.)

While there was no shortage of doom and gloom headlines tied to those releases, there were also a few insights to bolster the hope that some meaningful inflation cooling may finally be on the way.

Base Effect Impacts on Inflation Measures Will Now Be More Favourable

The CPI indices comprise average price points over the most recent twelve months, and they move higher when the most recent rate of price growth is higher than a year prior.

That means the CPI indices are affected by both the current rate of price growth and by the base rate a year prior (which is referred to as the “base effect”). 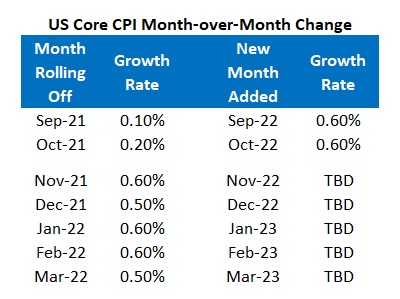 The chart on the right shows that the gap between the year-ago data (the base) and the current US Core CPI readings is about to narrow substantially. That will form a much more favourable basis of comparison and significantly improves the odds that the growth rates of the US Core CPI index will stabilize or decline in the months ahead.

Supply chain issues continue to be rectified. US ports have cleared up most of their backlogs. Shipping costs have fallen about 75% from their peak and are approaching their long-term average levels.

The first big inflation surge at the outset of the pandemic was caused by increases in the cost of goods, and, aside from food and energy, core goods prices were flat month-over-month in the most recent report and have been on a decelerating trajectory of late.

In a report published last week, Edward Jones Investment Strategist Angelo Kourkafas noted that “prices paid by manufacturing firms for inputs have dropped to their lowest since June 2020, and prices paid by services firms have dropped to their lowest since Jan 2021”. He predicts that “this easing should eventually find its way to consumer prices”.

Today’s Inflation Mix Will Be More Impacted by Rate Hikes

In his report from last Friday, CIBC’s Deputy Chief Economist Benjamin Tal explained that our central bankers couldn’t do much to impact the supply-driven inflation that was pushing prices higher during the pandemic (because their monetary policies have much more impact on demand-driven inflation). But he also noted that today, “the contribution of supply factors to inflation is on a clear declining trajectory” and that “current inflation is driven almost evenly by demand and supply”.

That proportionate increase in the amount of inflation that is demand driven means that rate hikes will now have a more powerful impact on price pressures.

Tal concludes that this dynamic may “reduce the likelihood/magnitude of any overshooting by the Bank of Canada and the Fed” because it “leaves more control” in their hands.

As noted in last week’s post, controlling inflation is only half the goal for central bankers right now. Convincing the public that it can successfully do so is the other half.

On Friday, economist David Rosenberg reported some of the latest survey results: “The University of Michigan 5-10 year inflation expectations at +2.7% are tied for the lowest since December 2020. The Conference Board’s one-year measure at 6.8% is tied for the lowest since September 2021. And the New York Fed’s consumer expectation survey on a three-year basis is well off its highs as well, flirting with levels last seen in October 2020.”

In Canada, the Q3 Business Outlook Survey and Survey of Consumer Expectations will be released later today, and we’ll soon see if more price easing is anticipated here as well.

Now let’s tie the information above back to my advice to Canadians who are currently in the market for a mortgage.

I continue to believe the BoC and the Fed when they insist that they will do what is necessary to bring inflation to heel, even if their approach will cause pain and “break things” across the broader economy.

The key questions now are: How much more monetary-policy tightening will be required, and long will it take for those actions to restore the supply/demand balance?

Today’s variable rates are certainly headed higher by at least 0.50% when the BoC next meets on October 27, and the market is currently pricing in a further 0.25% before the Bank hits the pause button. That will push prime rates to 6.20% (and, after typical variable-rate discounts are applied, that will translate into variable mortgage rates in the 5.2% to 5.6% range).

But if that will be their peak, how long will they stay there? How long will it take for that near tripling of rates since March to exert a sufficient bite on demand?

The Bank estimates that it can take up to two years for rate hikes to exert their full impact, but there are already signs of slowing, and I believe that the extent of those hikes, combined with their magnified effects due to our record-high household and government debt levels, will shorten the time it will take for the necessary pain to take root.

In fact, I think there is still a very good chance that the BoC may cause more pain than it bargained for and must reverse course more quickly as a result.

If I’m right, today’s variable-rate borrowers could start to see some rate relief in the second half of 2023. That may feel like a long way from now, but for anyone taking a five-year term today, or with several years left on their existing variable-rate term, there will be plenty of time for rates to drop from their current levels, and for interest-saving relative to today’s fixed rates to accrue.

On the other hand, conservative borrowers can still opt for fixed-rate stability. I suggest, however, that they consider that in today’s volatile rate environment, stability comes with its own risk.

Today’s fixed-rate borrowers will be locking themselves into a new term in the midst of the biggest spike in fixed rates in more than 40 years, and that decision could substantially delay their ability to benefit from falling rates when they occur. The longer the term you lock in now, the longer that potential delay could be.

Against the current backdrop, I would still be choosing between five-year variable-rate options and shorter-term fixed-rate options. But that’s based on my view of how the next couple of years are going to play out, which is far from guaranteed.

If you still prefer a five-year fixed rate, because forecasts can be wrong and higher rates could stick around for longer than most of us expect, do yourself a favour and avoid the all-too-common fixed-rate contracts that come with substantially higher penalties to break (because they will greatly limit your future flexibility).

The Bottom Line: Last week’s higher-than-expected US inflation data took bond yields on another elevator ride, and that means that fixed mortgage rates are poised to head higher again soon.

Variable-rate discounts were unchanged last week, but it would be a shock at this point if the BoC doesn’t raise its policy rate by at least another 0.50% at its upcoming meeting on October, 27. If that happens, variable mortgage rates will rise by the same amount shortly thereafter.