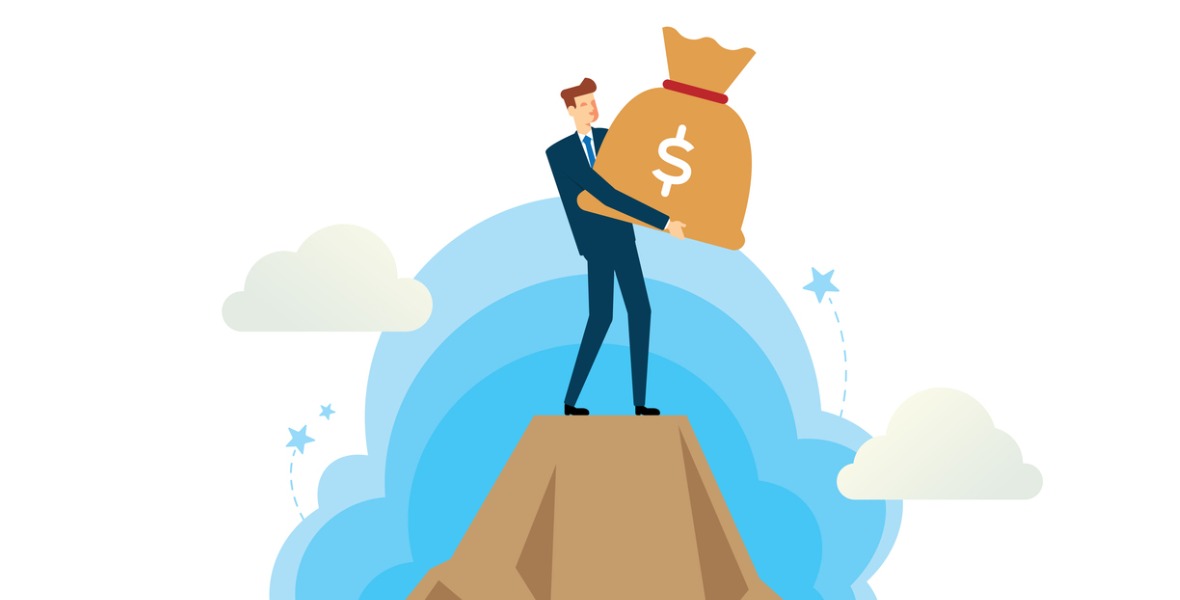 When Will US Inflation Peak?

US inflation surged higher last week and took our fixed mortgage rates along for the ride. In today's post, I explain why US inflation fear may soon peak out.

Last week we learned that US inflation hit 7.5% in January, exceeding the consensus forecast of 7.3% and marking a 40-year high.

The market’s reaction was as expected. US bond yields surged higher and investors raised their bets on Fed rate hikes to come.

The consensus now believes that the Fed will raise its policy rate by a total of 1.75% in 2022, and the bond futures market is pricing in a 63.7% chance of a 50-basis-point Fed rate hike at its next meeting on March 16.

The five-year Government of Canada (GoC) bond yield, which moves in lockstep with its US equivalent, also surged higher by 0.16% last Thursday, and another round of increases to five-year fixed mortgage rates is already underway. (As I wrote last week, for better or worse, our fixed mortgage rates are headed wherever the US bond market takes them for the foreseeable future.)

The Fed and the Bank of Canada (BoC) are in the midst of a delicate balancing act.

On the one hand, they continue to attribute most of today’s inflation pressures to supply issues, which are slowly but surely being resolved and which they expect will start to meaningfully abate in the second half of this year. But on the other hand, they must preserve their inflation-fighting credentials and prevent inflation expectations from becoming unanchored. If that happens, fear of higher prices could lead to changes in consumer behaviour that cause more actual inflation to materialize.

(To further illustrate the difficulty of that balancing act, consider that our central bankers must use backward-looking inflation data to determine the appropriate monetary-policy changes to make today, knowing that those changes won’t fully impact demand until a year or more from now.)

Inflation is obviously a problem, and rates are moving higher in response, but it didn’t exactly sneak up on us.

The pandemic delivered the most severe negative economic shock in a century, and policy makers responded with record levels of fiscal and monetary-policy stimulus to counteract it. The US federal government has spent $5 trillion since March 2020, and much of the huge COVID-relief chunk of that spending was helicoptered straight into personal bank accounts.

That super-charged demand hit at the same time that supply was being impacted by pandemic-related disruptions.

Inflation surged, as our central bankers predicted/warned that it would. But their accompanying reassurances that the surge would be short lived proved incorrect, costing them credibility, and leaving them with less room to manoeuvre going forward.

Each new US inflation report stokes more fear that the Fed has lost control and cannot contain inflationary pressures, but recent developments in the US labour market give me hope that we may look back on this as the point when inflation fears peaked.

Most people would agree that our current inflationary pressures are still, at least primarily, supply related. The real difference in opinion today is about where inflation is headed over the longer term, and that will come down to the cost of labour. Those most concerned about future US inflation believe that the current shortage of US labour will lead to rising wage costs. Labour is the largest single expense for most businesses, and rising labour costs would fuel a broad and sustainable rise in prices.

Until recently, the US economy had more job openings than unemployed workers to fill them, and the largest areas of unmet labour demand were centred in the lower-paying, high-contact jobs that were directly lost to the pandemic.

Employers had to respond by raising wages and offering other incentives to entice people back to work, and some market watchers warn that those developments portend a long-term uptrend in labour costs.

But not everyone is convinced (myself included).

It isn’t surprising that the take-up rates for low-paying, high-contact jobs lagged for as long as COVID-relief funds flowed, and people could choose to stay home. In the US those emergency unemployment programs dried up in October, and three months later, with their savings buffer depleted, workers are starting to return in droves.

Check out this chart of the US participation rate, which measures the percentage of working-age Americans who are either working or actively looking for work, which has surged higher over the last two months. 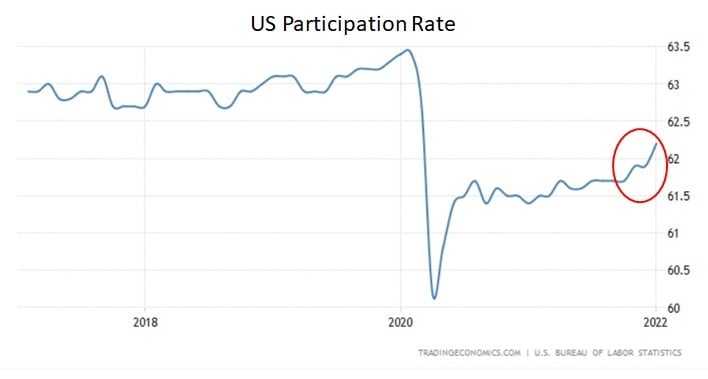 If the US participation rate continues to recover, it will help to resolve the current supply/demand imbalance in the labour market, and that, in turn, will help moderate US labour costs.

It will take time for the participation rate to return to its pre-pandemic level, and there is debate about whether it will ever fully recover, but if it continues to improve in the months ahead, and if supply constraints continue to ease, US inflation will moderate more quickly than the consensus expects.

Now let’s tie all this back to Canadian mortgage rates.

If you’re in the market for a mortgage rate today and you opt for a five-year fixed rate, you have the certainty of knowing what your payments will be until 2027, and any option that reduces uncertainty in the current environment is certainly appealing.

But reducing interest-rate risk comes with a cost premium, and along with it, the risk that your fixed rate will end up being more expensive over time. That risk appears greater than normal right now because of the aggressive rate-hike views that are reflected in the current GoC bond yields that our fixed mortgage rates are priced on.

(To partially hedge against that risk, fixed-rate borrowers should ensure that their mortgage contracts don’t come with back-breaking penalties that will prevent them from refinancing if fixed rates do ultimately drop.)

Today’s variable-rate borrowers should prepare for their rate to start to rise in March. The key question for them is how fast and by how much?

My short answer is, likely by less than the six quarter-point hikes in 2022 that are currently priced in.

I continue to believe that today’s record-high debt levels will magnify the impact of each rate hike, and that our lower inflation rate (relative to that in the US) will require fewer hikes than are currently forecast for the US to bring Canadian inflation back to target.

If I’m right, there will still be something left of the 1.50% spread that most variable-rate borrowers start out with today. If I end up being wrong and that spread completely disappears, I think a recession, and rate cuts, will follow shortly thereafter.

The Bottom Line: Five-year GoC bond yields piggy backed their US equivalents higher last week, and that has started yet another round of five-year fixed rate increases. The momentum in bond yields is still pointing up for the time being.

Variable rates are still likely to head higher at the BoC’s next meeting on March 2.