Will October Mark the End of Canada’s Employment Recovery?

With a slowing job recovery and Covid resurgent, mortgage rates are likely to fall further - here's how to take advantage.

Last Friday Statistics Canada released its latest employment report and estimated that our economy added another 84,000 jobs in October.

The more jobs we recover, the slower the pace of additional gains will be and the more evident the permanent damage caused by COVID will become.

The pessimists would also point out that there are more economic storm clouds looming on our horizon. 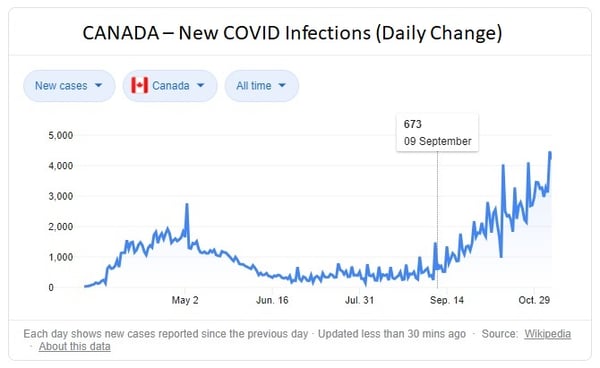 Our daily new COVID infection rate has been trending higher since early September and just hit a record high. That has forced our policy makers to grapple with new shut-down measures that will negatively impact our employment data going forward.

Quebec provides an example of what may be in store.

That province increased restrictions on September 28 and then went on to lose 42,000 jobs in accommodation and food services and 12,900 net jobs overall in October.

Ontario announced that it was returning to modified Stage 2 restrictions on October 9. It still managed to add 30,600 net new jobs last month in spite of this, but given the continued spike in Ontario’s infection rates since then, and despite the Ontario government’s more recent tweaks designed to minimize the economic impact, a surge in job losses seems inevitable.

The November employment data will provide a more telling indication of the impact of Ontario’s latest lock-down measures.

More broadly, the key aspects of our current employment picture remain the same.

The pandemic has disproportionately impacted low-income earners. As CIBC economist Benjamin Tal put it recently, “the lower the wage, the more dramatic is the remaining jobs gap.”

If additional shutdown measures are reintroduced and drag on, COVID’s impact on our employment data could spread beyond high-contact, lower-paying jobs. If that happens, the resulting economic contagion will spike alongside our infection rates.

Against that unfolding backdrop, my advice to mortgage borrowers remains the same: variable rates make the most sense.

Uncertainty surrounding COVID still abounds, our policy makers remain extraordinarily cautious, and the risks to our economic momentum remain tilted heavily toward the downside. A weaker economy would increase the BoC’s existing commitment to low rates, and as such, I continue to believe that variable-rate mortgages are the better option for borrowers who can handle the (remote) risk that their rate could rise.

If our economic momentum slows, our Government of Canada (GoC) bond yields, and the fixed-rate mortgages that are priced on them, should also continue to fall.

That will be especially true if the Bank of Canada follows through on its promise to focus its quantitative easing program on the government bonds that are tied to “borrowing rates that are most relevant for households and businesses.” If they do that, the five-year GoC bond yield is very likely to move lower, and, by association, so will fixed mortgage rates.

In my view, anyone who takes a variable-rate mortgage today will have the option to convert, at no cost, to fixed rates that likely will be lower than they are now (conversely, anyone taking a fixed-rate mortgage today would be stuck with potentially huge prepayment penalties).

In times of uncertainty, as is so often the case, flexibility is what matters most.

The Bottom Line: Five-year fixed rates fell a little last week and five-year variable-rate discounts widened (which meant they moved lower as well). I expect the current well-established trend of gradually falling rates to continue for as long as we’re still wearing masks in the check-out line.