The Trump Tower is Breaking Ground in Toronto

Donald Trump will be in Toronto on Friday October 12th for 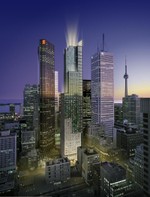 the official ground breaking of Trump Tower at the corner of Bay and Adelaide. Canadian billionaire, and the money behind this project, Alex Shnaider will also be on site.

This project has had its fair share of hurdles. After a failed partnership with the Ritz Carleton hotel group, the project re-launched in 2004. Despite a highly publicized battle with Harry Stinson's now defunct Sapphire Tower for the title of tallest residential condo in Canada, sales for Trump Tower never really picked up. In July of this year, the developers announced that they would be cutting their condo down in size to 57 floors from the 70 they originally planned to build.

I am sure this ground breaking will come as a bit of a surprise to the many real estate pundits who doubted the project would ever start construction.

Following the pandemic-induced slowdown, the number of leased condo units has returned to a...
Read More
Safe Investments

Is Investor Demand for Condos Already Up Again?

As agents suggest that demand from investors for Toronto condos has likely exceeded pre-pandemic...
Read More
Condos | Toronto and GTA

This month we do a data dive on the City of Toronto’s volatile condo market over the past year.
Read More