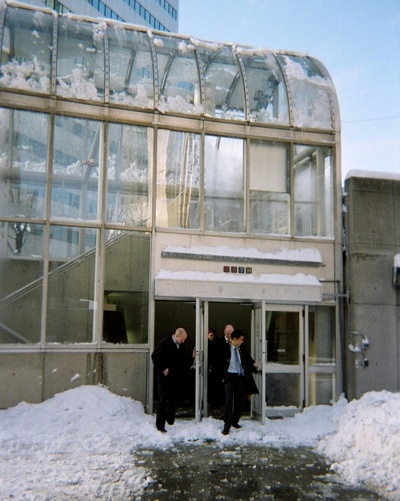 A Winter's Lament for the City

I am grateful for the holidays, however bittersweet, and that all too brief opportunity to catch-up with a bright, wandering tribe I call my friends and family.  By year's end, we usually huddle over Dufflet's carrot cake, which my sister insists on buying for herself as a birthday insurance policy.  Because we found ourselves more settled in life than was expected by this year's cake, talk quickly turned to dizzier days.  Days when it seemed natural to live in Kinko's, cobbling together portfolios and applications – glorified scrapbooks of the schools, cities, careers, grown-up lives we haphazardly pursued, determinedly.

Of the programs completed around the table, the requirements for architecture stood out as particularly wide-ranging and rigorous – applied design and engineering or high art?  In spite of the emphasis given to artistry by many academic programs, our friend, a soon-to-be architect, explained that a lot of dreambooks are eventually swept away in a profession characterized by high stakes.  Perhaps this explains why I, like so many Torontonians, am often bewildered when I roam the city - a feeling that has only intensified during this unusually emphatic winter.  Is it money, or rather the expediency used to capture it, that has made so much of Toronto into something other than a winter wonderland?

First, there is the issue of the snowy missile-in-waiting.  Recently, I tried to snap the miraculous escape of some of our fellow citizens – unsuspecting commuters who narrowly avoided being hit by a falling shelf of snow while exiting the PATH near Union Station.

It all happened too quickly (hint: look at the slippery curves up top and then at the white piles down below).  Perhaps the design culprit is dated whimsy or economical chicanery, but clearly, snow and domes should not be mixed outside the curio store.

Oscar-winning documentaries and fifteen-year lulls notwithstanding, snow and ice have been known to visit Toronto.  But this annual ritual is not always taken as a starting point when contemplating our streets.  The complexity of Libeskind's ROM crystal design - reportedly sketched on the back of a napkin - required a costly rethink when it was realized that its sharp angles would continually produce avalanches at Bloor and Avenue - a "living exhibit" more suited to the Ontario Science Centre.

Weaponry aside, I wonder if we have built the city that suits our climate from another vantage point.  Is there anything more isolating for urban dwellers without proper footwear than being blanketed in 25 centimeters of snow?  Being a suburban dweller trapped by the no-go zone that is the frozen, car-encrusted driveway.  Even if one dares to venture out of a suburban enclave on foot, the need for more courage is the only reward.  There is something very eerie about the sight of those lonely, monstrous snowbanks, bereft of tobogganers, that cloister big-box parking lots (CSI Toronto: if someone were looking to hide a body, would anyone even notice?)  From a weather angle, our car dependency results in self-imposed exile, a Siberia of our own making.

Visual jarring is another unfortunate symptom of our winter-myopia.  I am constantly thrown into a state of confusion when I step out of my East York home into Tuscany.  Or what Tuscany would look like if grey (not yellow) stucco was on sale at the local home reno store. 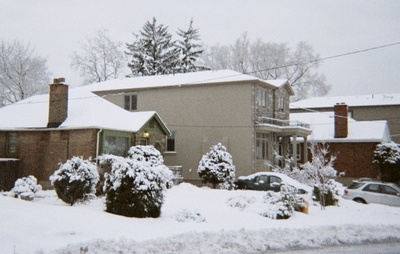 I appreciate that growing bungalows may be the only way to house growing families, and I support efforts to keep people in older, established neighbourhoods.  But as bricks start to disappear from our city, largely for reasons of economy, I wonder how our visual language will fare.  Someday, the appearance of brick may no longer signal to a young child the end of a trip to the siding-filled suburbs of Florida.  And aside from there being a strong aesthetic argument in favour of brick chimneys at Christmas, I wonder if we are building neighbourhoods that will weather our seasons as did the older homes now coming down around us.

While denial is a natural response to winter's many trials, beauty usually results when we are in harmony with our environment.  Is Toronto the winter city that it could be?