Stats Can's recent release, Dependence on Cars in Urban Neighbourhoods, reveals that car culture is alive and well in Canada - understandable to those that live the morning rush hour, daunting for those who wish to see this trend reversed.  The report, part of the Agency's Canadian Social Trends series, notes that overall levels of car dependency grew from 1992 to 2005 across Canada. 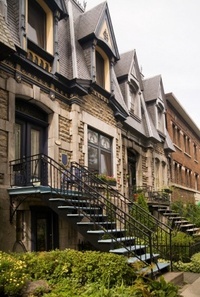 In this snapshot, 'dependency' generally means using the car for all trips in a single day.  Looking at the urban/suburban divide, the report confirms that there is a strong correlation between car dependency and living in low-density neighbourhoods (defined as areas in which 66.6% of dwellings are traditionally suburban - e.g., single, semi-detached or mobile homes).  Ditto for living further out from city centres.

Given that current growth plans put a high premium on high-density growth that promotes the use of public transit, you would think that we are only correcting mistakes of old.  Instead, rapidly sprawling cities of today such as Edmonton and Calgary are most car dependent - with 77% and 75% residents making all trips in a single day by car. In older, once bounded-by-water Montreal (see left), only 65% of residents indicate such usage.

And it appears that it is hard to escape the destiny of that initial housing footprint.

Even Canada's central urban
neighbourhoods were not created equal, some being more dense than others (high-density neighbourhoods are defined as areas in which less than 33.3% of dwellings are traditionally suburban, i.e., predominantly comprised of apartments, low- and
high-rise condos and row houses). Here again, Montreal, with its older, charming, town home-lined central core leads the way (see below), with only 29% of residents reporting high car use. Compare
to Toronto at 43%, which may be due to the strong presence of bungalow,
single and semi-detached homes in our downtown neighbourhoods.
Vancouver and Calgary follow at 56% and 66% respectively.  Smaller cities, between 67% and 75%, feature more car usage in downtown cores. (2001 Census data confirms the density theory: single homes comprised only 4% of central housing in Montreal, 13% in Toronto and 21% in Vancouver; this figure climbed to 45% in smaller cities. It will be interesting to see if recent condo booms in Toronto and Vancouver have changed these figures substantially.) 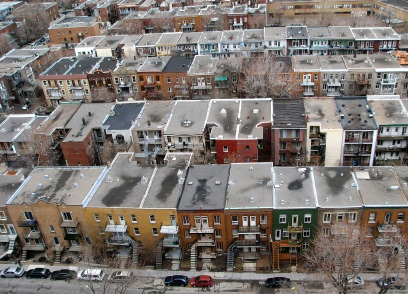 A study is only as good as its assumptions, so have a look at the
original report for a more detailed breakdown of key findings. Also have a look at the interesting companion piece, The City/Suburb Contrast: How can we measure it?, which examines the tricky science of
defining neighbourhoods.