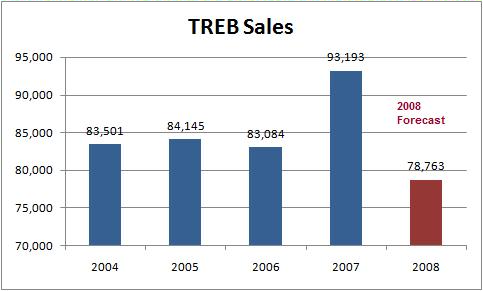 The story for Toronto’s real estate market continues to be consistent half way through June.  Prices continue to rise and sales continue to decline.  Prices are up 4% over the same time last year and sales in the GTA declined by 14%.

In Wednesday’s press release TREB tries to fight the doom and gloom story that has been dominating the headlines recently by comparing sales in 2008 to sales in 2006.  TREB is taking this approach because sales reached record heights in 2007 making it a bad year to compare current sales to when trying to assess the health of the real estate market.  The following chart shows that sales were relatively constant between 2004 to 2006 and increased suddenly in 2007 by roughly 10,000.  Much of the increase in 2007 has been attributed to the introduction of the 40-year mortgage.  The 40-year mortgage suddenly made home ownership more affordable thus driving up sales for that year.

Most real estate pundits expected sales to drop in 2008 once the immediate shock of the 40-year mortgage wore off.  Sales were expected to drop back to a more balanced level, a level closer to the volume we saw between 2004 and 2006.  By comparing current sales to 2006 sales, TREB is effectively asking whether sales in 2008 are actually poor or whether they appear poor because we are comparing them to the records set in 2007.

I think this is an important question and one that brings greater perspective to current sales in Toronto’s real estate market.

But TREB's analysis really starts to go downhill from there.  In a desperate attempt to show the negative effects of Toronto's Land Transfer Tax, they come up with this:

In the City of Toronto 1,733 sales took place to mid-June 2008. This represents a 15 per cent decrease compared to the 2,045 properties sold a year ago but a two per cent increase over the 1,690 transactions in the first half of June 2006. A different story emerges when you compare the first half of June 2007 before the Toronto Land Transfer Tax went into effect to the same period in June 2006, a period showing a 21 per cent increase in sales.

In the first half of the paragraph, TREB decides to compare 2008 sales to 2006 sales, presumably because sales in 2007 were extraordinarily high.  In the last sentence, TREB suggests that Toronto without a Land Transfer Tax could expect to see something closer to the 21% increase in sales volume we saw between the first half of June in 2006 vs. the same period in 2007, before the tax was introduced.  Unfortunately, TREB suddenly forgot the very point they made earlier which is that 2007 does not make for a good comparison year.  The 21% increase in sales last year was not typical but the result of a shock to our real estate market when the 40-year mortgage was introduced, spurring demand.  It is hard to tell whether the decline in sales this year has to do with the Toronto Land Transfer Tax (which TREB asserts) or whether sales were coming back to a more balanced level following the spike last year (which TREB also asserts).

For an industry that is constantly fighting a negative self-serving image, providing the public with this type of analysis is probably not the best way to win friends and influence people.