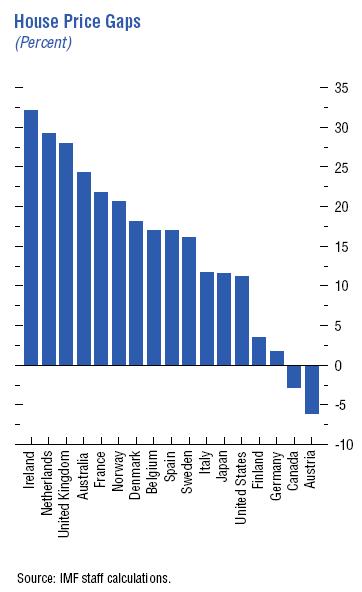 A few months ago I did a live online Q&A on globeandmail.com where I had the opportunity to answer questions about Toronto’s real estate market.  One question I have been meaning to elaborate on came from a reader in the United Kingdom who asked:

In what way is Canada unique and special in the world and able to transcend global forces much bigger than one country? I just think the housing market will crash because credit is drying up everywhere, and most Toronto houses are not worth it.

To answer this question, I turned to a recent International Monetary Fund (IMF) report which provided a cross-country analysis of housing markets.  The report had two salient conclusions for Canadians.

There are many factors that can impact a country’s real estate market, some explainable others not.  Some of the fundamental factors behind the real estate market include housing affordability, growth in disposable income, short and long term interest rates, credit growth, changes in equity prices and working age population.  The IMF modeled real estate markets in 17 countries to see how much price appreciation could be attributed to these fundamental factors and how much was the result of unexplained factors.  Unexplained increases in home prices could be attributed to economic variables that were not included in the IMF’s model, but could also be indicators of overvaluation in a particular market.  Overvalued markets are more vulnerable to price corrections.

The following chart shows the percentage increase in house prices from 1997-2007 that cannot be explained by the fundamental factors outlined above.  You will note that Ireland, Netherlands and the United Kingdom experienced the highest rate of unexplained price appreciation.  In these countries, prices were roughly 30% higher than could be explained by market fundamentals.  At just over 10%, the United States is towards the lower end of the spectrum, most likely because they have already seen a reduction in house prices.

Canada’s house price gap stands at around -2.5%.  What does a negative house price gap mean?  It means that based on the fundamental economic factors listed above, house prices in Canada didn’t appreciate as much as they should have.  It also suggests that Canada’s housing market is among the most rational and least vulnerable to a major price correction.

In order to summarize cross-country differences, the IMF developed a Mortgage Market Index which is a simple average of several key factors that are good indicators of credit availability.  The index lies between 0 and 1 with higher values indicating easier access to mortgage credit.

The following table outlines how each country performed on each of the variables and shows their Mortgage Market Index. 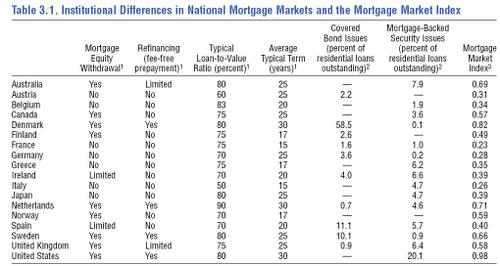 One thing to note is that the IMF report appears to be based on Canadian data prior to the introduction of the 40-year mortgage and zero down mortgages.  Had the IMF used current data I suspect that Canada would have had a slightly higher Mortgage Market Index.

The Mortgage Market Index is important for a number of reasons.

The IMF found that changes in the demand for housing have a greater impact on the economies of countries with a higher Mortgage Market Index.  The current events in the United States are a real life example of this finding.  The US has the most open and flexible mortgage market of the countries surveyed and the recent slowdown in their housing market has had wide spread negative effects on their overall economy. 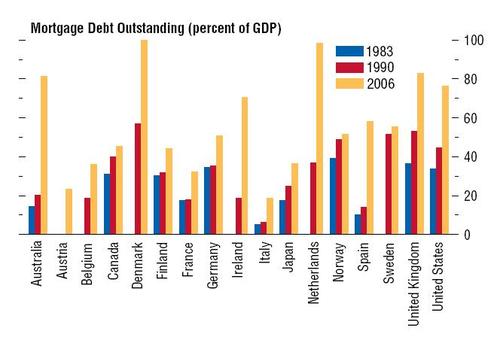 The IMF also found that countries with higher Mortgage Market Indexes had higher rates of consumption and were more likely to consume using the equity in their homes.

The IMF report suggests that very “flexible and complete mortgage markets” may not be the best thing for a country’s economy.  It results in higher rates of mortgage debt, more home equity-based consumption and an economy that is more vulnerable to shifts in the housing market.

Finance Canada’s decision a couple of years ago to extend amortizations from 25 years to 40 years and to introduce zero down mortgages was clearly a step towards increased volatility.  Their recent reversal to tighten mortgage credit in Canada will help move us back to a more balanced mortgage market.