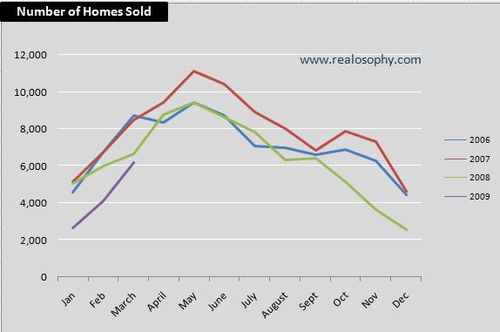 The Toronto Real Estate Board released their March sales statistics yesterday and they appear to be encouraged by the fact that sales are down by just 7% from March 2008, "representing the smallest year-over-year decline in the last five months".  While there was some good news in TREB's March Market Watch report, it had little to do with the 7% decline in sales over last year.

While total house sales is an important measure to track, it's only one half of the equation.  It's just as important to understand how changes in the supply of houses is impacting the market.  The following chart shows the number of new listings for each month. 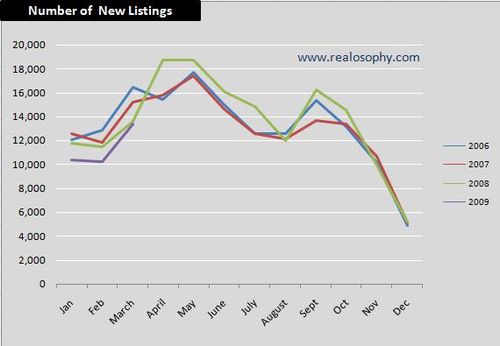 Toronto's sales-to-inventory ratio gives us some insight into how much demand there is in the market relative to the supply of homes.  Even though the demand for homes in Toronto may be down when compared to previous years, the decline in the supply of homes coming on the market has moved us back to a more balanced real estate market. 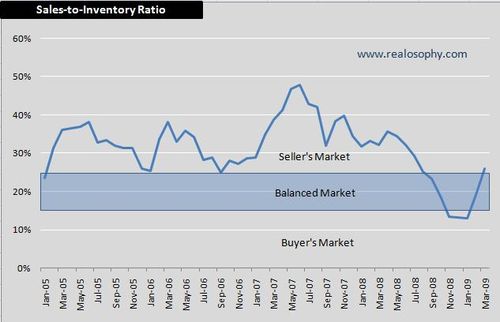 In an upcoming post I'll discuss the sales-to-inventory ratio in more detail with specific emphasis on the impact it has on prices.  I'll also see what lessons we can learn from looking at sales-to-inventory figures from Toronto's real estate crash in the early 1990's.

John Pasalis is the Broker of Record of Realosophy Realty Inc in Toronto. Email John