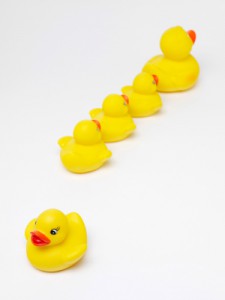 I have always enjoyed challenging widely held beliefs, probably because so many of them fall apart upon closer examination. Most recently, my contrarian radar started going off in the summer as talk of a Canadian housing bubble increased from a simmer to a boil. One of the most common justifications used in the argument that our house prices are due for a

precipitous fall is that rock bottom interest rates have nowhere to go but up. When rates increase, the argument goes, affordability decreases and prices have to fall or buyers will be priced out of the market. Fair enough. It’s true that when interest rates increase, the cost of borrowing becomes more expensive, and it’s reasonable to assume that our historically low interest rates are more likely to increase than decrease over time. Bubble talkers regularly cite both factors when making their case, and after much repetition, consumers accept the conclusions that are drawn from these assumptions as valid. Far be it for me to let real data get in the way of a good round of group think, but alas, I do enjoy tipping over the apple cart, so here goes.

Over the past thirty years, increases in Canadian mortgage rates have not tended to trigger a decrease in houses prices. In fact, more often than not the reverse is true. Before I get into the numbers, let me start by citing my sources. I took the average five-year residential mortgage lending rate (from Statistics Canada) and compared it to the average selling price of a Canadian home (provided in a report by the Canadian Real Estate Association), on a month-by-month basis from January, 1980, up to June, 2010. I used the five-year fixed-mortgage rate because it is by far the most common term chosen by Canadians, and I went back to 1980 because that was as far back as the CREA stats went. The only tweak I made to the data was to compare interest rate changes to house prices two months hence, because I reasoned that higher rates would immediately impact offers to purchase, which take about two months to become transactions. Here is what I found:

Over this period, totaling 365 months, there were 156 instances where the five-year residential mortgage rate increased over the prior month, and in 97 of these cases, house prices increased two months later. That means that

62% of the time, increasing mortgage rates corresponded with higher pricing. I also wondered what happened to average prices when rates rose precipitously, so I looked at cases where month-over-month rate increases were greater than 5% (this happened in only 22 of the 365 months observed). To my surprise, in 13 of those 22 months there was still an increase in average house prices two months hence. So, even in cases where rates rose dramatically, the odds were still better than 50% that they coincided with rising house prices. While I will concede that this ‘back-of-the-envelope’ analysis is a tad simplistic, I think a trend established using thirty years of data is compelling.

So how do we explain this counter-intuitive result? Well for starters, interest rates and house prices do not exist in a vacuum and both are influenced by the overall strength or weakness of our broader economy. Rising interest rates generally occur in a healthy economic environment where future price inflation is expected, making them a by-product of positive economic momentum. While it certainly is true that higher rates increase borrowing costs, this generally happens in periods with rising incomes, higher levels of employment and increasing consumer confidence. To take our contrarian thinking to its logical conclusion, we should all be rooting for higher interest rates. Seriously. Rock bottom rates are sustained when concern over inflation is replaced by fears of disinflation and outright deflation. Higher rates, on the other hand, are a sign of increasing confidence in our future economic prospects.

One last point. While I think the bubblers have misread the short-term relationship between rising interest rates and house prices, I am not altogether bullish about the immediate direction of house prices. We have seen substantial price appreciation in the last few years, and despite o

ur recent positive economic momentum, we are far from out of the woods. Our average income levels, arguably the most important predictors of the future of house prices, have not kept pace with the rising cost of real estate and the two measures must trend in the same direction over the long-term (with either prices falling or incomes rising to restore their equilibrium at some point). For that reason, I think house prices may well soften over the short-term, but not to a bubble-bursting degree. While the debate rages on, I hope that my analysis of the immediate relationship between rate increases and house prices gives you a different perspective when deciding which camp you’re in.

COVID-19 is redefining the world as we know it.
Read More
Safe Investments

Strong jobs numbers in May and June mean little against the backdrop of unprecedented job and...
Read More
Mortgage

Calculators, links and info you need to make the best decisions for you.
Read More