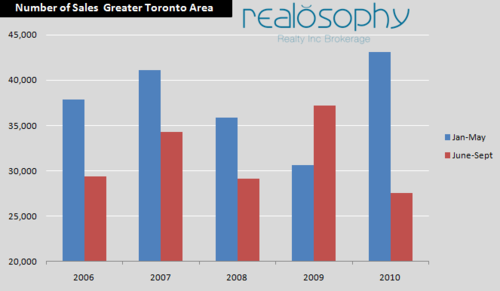 The average price for a Toronto home increased by 5% in September over the same month last year to $427,329.

You can see all the monthly charts on our real estate statistics page.

The big news this month continues to be the rapid decline we are seeing in sales.  The number of residential sales in September dropped by 23% over last year to 6,310.  Over the past four months we’ve seen double digit declines between 22%-34% in Toronto real estate sales.

The press has focused on this decline in sales with alarming headlines about a sudden chill in Toronto’s real estate market.

It’s no surprise that the real estate bears are also jumping all over this recent trend.  One writer called the slowing sales and rising prices a “hugely confusing trend – at least confusing to those who don’t understand how markets tumble.”

So is this trend confusing?  Is this decline in sales the first sign that Toronto’s market is heading for a crash?

See the chart below.

If we look at years 2006 to 2008 we see a similar trend.  During the first five months of the year sales significantly exceed the volume of sales between June and September.

In 2009 we see this trend reversed with sales in the summer months exceeding the sales registered during the first five months of the year.  What happened in 2009 to trigger this change?

The real estate market in Toronto slowed down significantly between October 2008 and April 2009, largely due to the global financial crisis (punctuated by a huge U.S. bank failing). As the fall out from the crisis did not impact Canada as much as initially feared, consumer confidence picked up in the spring of 2009, pushing buyers who had put off buying a home in early 2009 to get into the market in the second half of the year.

If we fast forward to 2010, we see that sales during the first five months once again exceed the volume of sales in the summer, but the number of sales from January to May appears to be well above historical levels for those months.

Why did we see this inflated level of house sales during the first five months of 2010?

In February 2010, the federal government announced changes to insured mortgages that made it slightly harder for buyers to qualify for a mortgage.  The changes came into force towards the end of April 2010 which forced many buyers to accelerate their home buying plans to ensure they would buy ahead of the new rules coming into effect.

The other factor was the introduction of the HST.  While there is no HST on resale home sales, many buyers were confused about this issue and incorrectly assumed that they would have to pay HST on their home purchase.  As a result, many buyers accelerated their home buying plans to ensure they would take possession ahead of July 1st, when the HST came into effect.

Going back to our original question, is this decline in sales the first sign that Toronto’s market is heading for a crash?

Not likely, when the decline in June-September sales this year as compared to last year is assessed in the context of the sudden turnaround in the market in late 2009 and the rush to buy in Spring 2010.

It will be important to keep an eye on these numbers going forward. As I've said before, I think we will see a flatter sales trend over the next few years, but for now, those heralding a catastrophe appear to be as premature as those predicting a Toronto crash in 2009 - and 2008.