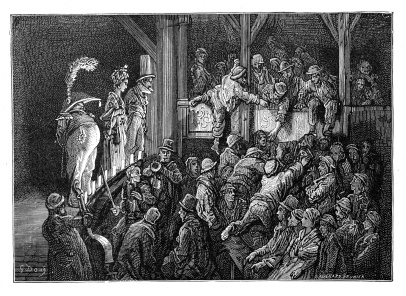 Editor’s Note: “Experienced” is an occasional column that reveals hidden bits of Toronto – not so much the trendy underground, but rather the organic “comfort food” that keeps so many of us whole. More Scarborough strip mall, less burlesque-men’s-travel-lounge-and-sushi-bar-of-the-moment. If you have an experience that you would like to share, I’d love to hear from you. Please email me at urmi@realosophy.com 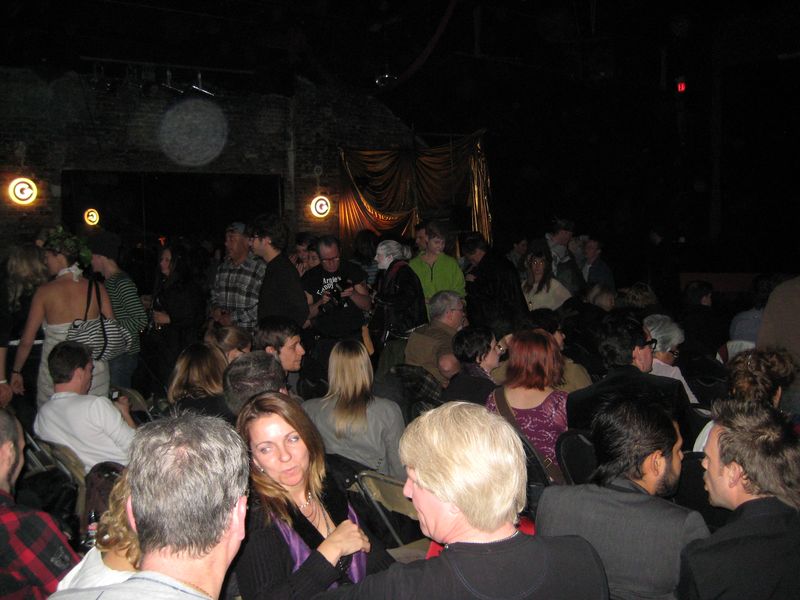 After enjoying Attenberg at the Royal Cinema, I didn’t expect a weirder take on Greece in the same week.* Cue Lunacy Cabaret’s Greek Gods and Greasers! A monthly fundraiser for Circus Without Borders in its 6th year, Lunacy is a Vaudeville show put on by volunteer circus artists, comedians, musicians and one-trick ponies.

The scene.  It’s January 29, 2011, 9pm. Gerrard and Greenwood. A few doors down from the coloured lights of Little India (where street vendors are frying up spicy goodies in minus 15 degree weather), a crowd has gathered in front of Centre of Gravity. Built in 1914, the beautifully restored building is once again home to Vaudeville theatre (and a circus training studio for adults and children). A young and dapper lineup bobs in the cold. A girl with heavily lined eyes, a pink wig under her tuque, leans out to ask if I have a ticket to sell. Unfortunately, the show is sold out. Patrons flood into a folding chair theatre-cum-beer tent. The show begins in half and hour, doors opened half and hour earlier, and it’s standing room only.


The audience. Flushed volunteers in crushed laurel wreaths rush around, a group of gorgeous gay boys regale each other and professionals in wool overcoats wait politely for the show to begin. A diminutive Iggy Pop wearing gold lamé hot pants leans on the wall, alone. And I don’t know if it’s the Jimmy Johnson meets Ted Koppel coif or the cowboy boots, but I’m convinced the man eyeing me is part of a swinging foursome. I ask the clown who is sitting beside me (she’s been training for six years) about the audience: “It’s a lot of people who go to the Burning Man festival in Nevada. And people from the suburbs.” It’s as if everyone in the audience started out with a Saturday night yearning for wacky thrills, and instead of watching Hoarders on TV, headed out to be with real live people.

The entertainment. Think Buskerfest meets U of T’s Engineering Skule Night meets the bawdiest bits of Shakespeare. A house band channeling K-tel’s “Songs of the 70s” compilation opens with the show theme: “Greece is a country. It has feta and ouzo. And it’s seismically active.” From there it’s a satirical Grease plot in which Zeus and Jesus play rivals for their love, Sandy, complete with song and dance numbers, a sexy human sacrifice pantomime, magic tricks, juggling, some off-colour jokes accompanied by banjo (low point) and talented aerialists and hoola hoopists (high points). There’s an amateur “you can do it!” vibe: people spill their balls, beans and hoops, pick them up and keep going. Expect lots of uncensored, sexually crass, blaspheming, Tipper Gore-be-warned kind of stuff. Cue the rabble’s incessant cry, “TAKE YOUR PANTS OFF!” (The show is strictly 19+).

The seduction. As anyone who’s visited a carnie town knows, there is something disquietingly sensual about the circus. Blame the bearded lady fetishists. But perhaps the most compelling part of Lunacy is the artistry of hoopists and arialists who do numbers with a touch of burlesque. Half the audience wants to be the artist. The other half wants to be with her. This is the circus grown up. (Above video: Lunacy Cabaret’s fire artists at the 2010 Harvest Festival.)

The interaction. The Oracle’s response to audience question: what is the solution to Greece’s financial crisis? Pi.

Muscled admirer to aerialist post-show: I bow to you, my goddess.

Organizers invite the audience to join them for drinks at a local bar after the show – everyone goes.

Neo-vaudeville. Or just the return of Vaudeville. A tag used to describe the revival of live theatre entertainment made up of unrelated acts – circus, comedy, music, dance and magic. With roots in working class variety halls and saloons, Vaudeville was the dominant form of public entertainment in Canada and the US from the 1880s to 1930s (when film took over). Today, vaudeville, along with burlesque, marks a return to highly social entertainment and alternate forms of expression.

Made in Toronto. Toronto comes by its Vaudeville cred honestly. The Elgin & Winter Garden Theatres was once a Vaudeville landmark and now houses the world’s largest collection of Vaudeville scenery and props. (Some great pictures of the era in a recent Blog TO post about the appeal of this entertainment among women workers in the late 19th century.)

Want to Experience? Next Lunacy Cabaret is Feb 19th, My Bloddy Valentine (Zombies & Lovers). You are strongly advised to buy tickets in advance ($13) from the Side Show Café (1300 Gerrard St East @ Greenwood). CirQlar, a circus-fusion events management company, hosts shows with an emphasis on bass music (cirqlar.com). U of T Engineering Skule Night is March 16-19 (skulenite.skule.ca). Or better yet, sign up for a class in hoola hooping, aerial arts, juggling or clowning at the Centre of Gravity (centreofgravity.ca).

*This along with my last Experienced post and the fact that I saw Dogtooth @ The Royal Cinema last night may (correctly) suggest that I have a Greek fixation, but the world seems to be having a major Hellenic moment.

Affordable Condos and Lofts for First-Time Buyers in East Toronto