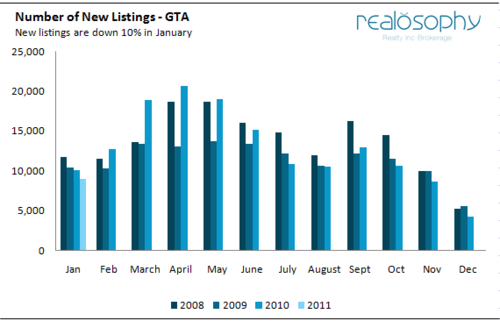 Are Toronto real estate prices on the way up or on the way down?  That’s the question we’ll be tackling today by looking at house price statistics from two different sources, each telling a slightly different story.

We’ll start by looking at the Toronto Real Estate Board’s monthly sales figures.  The number of new listings that came on the market in January 2011 declined by 10% over the same month last year.

The number of homes available for sale last month remained virtually unchanged while the number of sales declined by 13%. 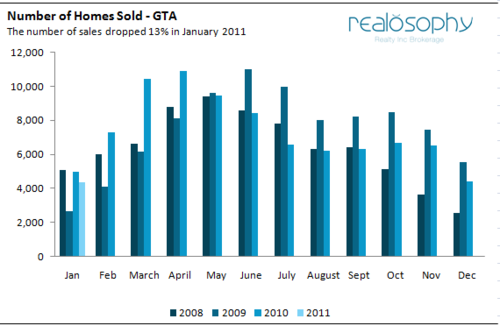 The sales-to-inventory ratio for January dropped from 39% to 36% moving us a little closer to a balanced market. 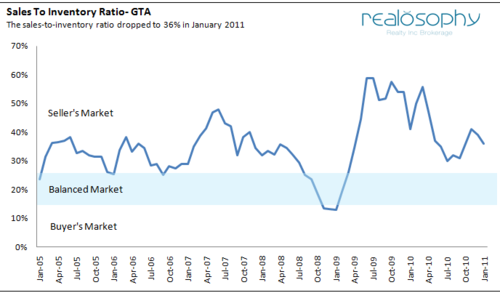 TREB reported that the average price for a home in the GTA last month climbed 4% to $427,037 over the same month last year.  Average prices have been on the rise in Toronto since June 2009 and over the past six months year over year appreciation has hovered around the 5% range.

If we take a look at another indicator of changes in house values, the Teranet-National Bank House Price Index we see a slightly different story.

According to the House Price Index, prices in every city except Vancouver have been on the decline between August 2010 and November 2010 (their most recent publication).  In the case of Toronto, the House Price Index has declined 3% between August and November.  The following chart shows the house price index for each city from June 2005 to November 2010. 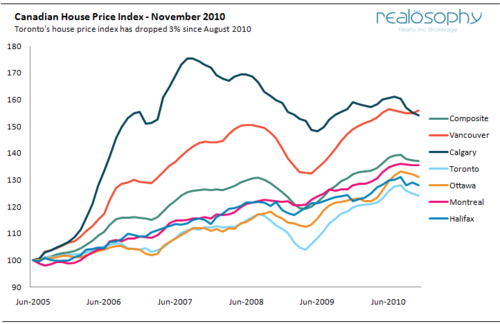 What does this mean for Toronto house prices?   Before answering that question we should briefly review the differences between the two metrics we are using.

The House Price Index uses something called the repeat sales methodology to calculate changes in house values.  This approach requires a property to have been sold at least twice in order for it to be used in their calculations.  They take the current sale price of a particular house and compare it to the previous sale price to measure the increase or decrease in value over that period.  This approach offers a more realistic look into changes in real estate values.

Instead of reporting on prices for a particular city, National Bank and Teranet have converted house prices into a standard index.  To do this they first assign a base period, in this case June 2005, for which the index for all regions is set to 100.  The index then captures just the appreciation or depreciation in house values for a particular market.

Looking back at the statistics for Toronto’s market, it’s worth noting that if we look at the year over year change in the house price index (Nov 2010 vs Nov 2011) the index appreciated by 5% which is in line with the appreciation reported by TREB.

The month over month decline we’ve been seeing since August may suggest that virtually all the real estate markets tracked by the index are losing steam.  For some time economists have been forecasting that house prices are going to appreciate at a more moderate rate of 1-2% per year vs the 5% we’ve been used to over the past ten years.  Maybe this is the first sign of a shift to more modest price gains.

If that’s the case, it will be interesting to see how this trend actually holds up over the next few months. The real estate market in Toronto continues to be very competitive with the majority of houses in prime neighbourhoods getting multiple offers.  We’ll definitely be keeping an eye on the House Price index in the months ahead.