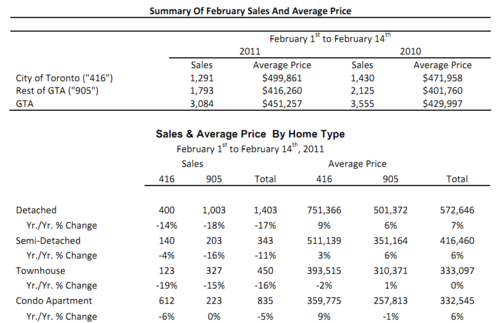 From the Toronto Real Estate Board:

"We are on pace for a strong sales result in February, but transactions will come in lower than the record result reported last February.  Sales remain strong because the GTA resale market contains a diversity of housing types catering to a wide array of home ownership needs," said Toronto Real Estate Board (TREB) President Bill Johnston.

The average price for transactions during the first 14 days of February was $451,257, representing a five per cent increase compared to the first two weeks of February 2010.

"Average selling price growth for existing homes is expected to range between three and five per cent this year.  Tighter market conditions over the last four months have pushed price growth to the top end of this range," said Jason Mercer, TREB's Senior Manager of Market Analysis.