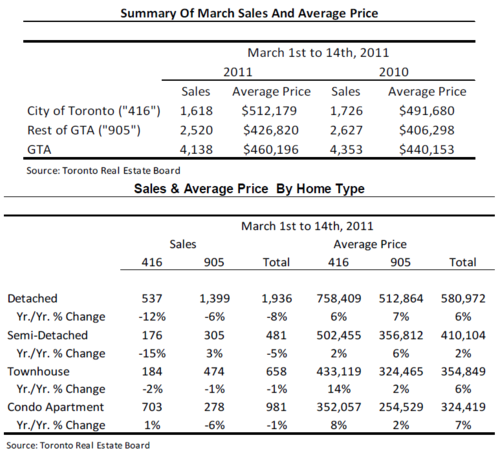 From the Toronto Real Esate Board:

"A positive economic outlook for the Greater Toronto Area, including steadygrowth in jobs and incomes, has kept households confident in their ability topurchase and pay for a home over the long term," said Toronto Real Estate Board(TREB) President Bill Johnston.

The average price for transactions during the first 14 days of March was $460,196,representing a 4.6 per cent increase compared to the first two weeks of March2010."

Market conditions are tighter compared to this time last year, resulting in morecompetition between buyers and sustained upward pressure on the averageselling price. The annual rate of price growth is expected to range between threeand five per cent in 2011," said Jason Mercer, TREB's Senior Manager of MarketAnalysis.