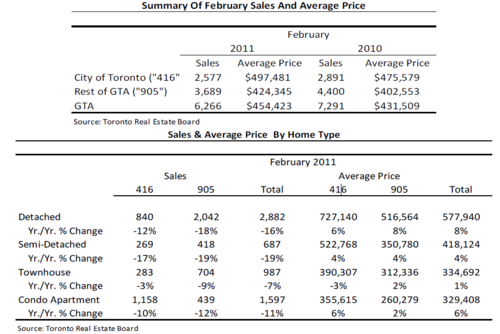 The Toronto Real Estate Board just published their monthly sales figures for February.  As usual, I'll take a closer look at the numbers in my monthly report next week but for now I've included a copy TREB's press release below.

The charts on our Real Estate Statistics page have also been updated.

Greater Toronto REALTORS® reported 6,266 transactions through the TorontoMLS® system in February 2011. This result was 14 per cent lower than the record sales reported in February 2010.

“Continued improvement in the GTA economy, including growth in jobs and incomes and a declining unemployment rate, has kept the demand for ownership housing strong,” said Toronto Real Estate Board (TREB) President Bill Johnston.