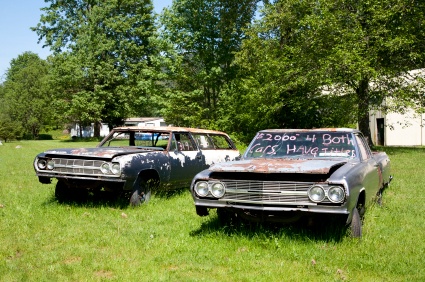 How to Avoid the Hidden Cost in Most Canadian Mortgages

If Canadians shopped for cars the same way we shop for mortgages, most of us would be driving around in old beaters that would be better used as lawn ornaments. That’s because all of our focus would be on  price (interest rate), and not on potential repair costs (interest rate penalties). If choosing a 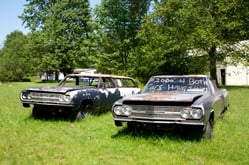 car based solely on its purchase price seems short-sighted to most of us, why do we make this mistake with mortgages? It’s probably because most people just don’t think they will need to break their mortgage contract early. But with so many variables - such as job transfers, an expanding family, an inheritance, the chance to buy your dream home, divorce, job loss - can you ever really be sure?

If you do need to pay out your fixed-rate mortgage early, you may be shocked when you see the penalty charged by your lender, and even more so when you realize that you could have avoided most of that cost by simply choosing another lender offering the same interest rate. Today’s post will use four different hypothetical borrowers to compare how fixed-rate mortgage penalties are calculated. In each case, we’ll figure out the extra penalty charged by some lenders, and then calculate the reduction in their interest rate necessary to make the overall cost of their mortgage equivalent to the cost of borrowing from other lenders who use more reasonable penalty calculations. (If that sounds confusing, fear not. It’ll become clearer when I show you the numbers.)

First, let’s understand the different ways that lenders calculate fixed-rate mortgage penalties. In your mortgage contract, it will say something like “your penalty will be calculated as the greater of 3 months’ interest or the Interest Rate Differential (IRD)”. Alas, in the majority of cases, your penalty will be based on the dreaded IRD calculation. In principle, the lender calculates the IRD by taking your interest rate and comparing it to the interest rate they currently offer for whatever term most closely matches the time remaining on your mortgage:

For example, if you have a five-year mortgage at 5% with three years remaining, and the lender’s current three-year rate is 3%, some lenders will take 5% minus 3% = 2%.

But here is where the shenanigans start. If your mortgage is from a lender who uses posted rates (we’ll call this group the “Big Five” banks), they won’t use your actual mortgage rate. Instead, they’ll use their higher “posted rate” that was in effect at the time you got your mortgage. (So that’s what posted rates are for!) That means your actual 5% rate will be arbitrarily increased by 1.4% to approximately 6.4% for this penalty calculation.What’s more, that same 1.4% is then also applied to the comparison rate on the term that most closely matches the time remaining on your mortgage. Here is what that does to your penalty:

I know. Ouch. While the original headline interest rate offered by the two different lenders was the same, the difference in penalties charged was $4,350 on a $100,000 loan. That’s 4.35% of the original amount borrowed! In a minute I’m going to explain why this difference in penalties will be even more pronounced if fixed rates start to rise; but first, let’s look at some more examples.

In the chart below, for the original rates, I used the Bank of Canada’s average five-year posted conventional mortgage rate for the appropriate month and year, and subtracted 1.42%, which a recent Bank of Canada report indicated is the long-term historical average discount offered on posted rates. I used the same interest rates for both lender groups and I used this Monday’s mortgage rates (April 4, 2011) to calculate the appropriate comparison rates (for a more detailed breakdown of my calculations, see my Penalty Worksheet).

This gives you a very close estimate of what your penalty would be today, if you had these rates and mortgage balances, and the same number of months remaining on your mortgage.

Once you have regained consciousness, I will direct your attention to the two penalties that comewith an asterisk (*). In both of these cases, the borrower’s mortgage rate was close enough to current rates that the Some Other Lenders group charged a penalty of only three months’ interest instead of the IRD. By contrast, by the time the Big Five lenders had grossed up the contract rate by 1.42% and reduced the comparison rate by the same amount, their IRD penalty was still alive and well. This is significant because if rates start to rise, Big Five borrowers will in many cases still be paying huge IRD penalties, while the Some Other Lender borrowers will only be charged three months’ interest. Look at the difference in the bottom line. Shocking, no?

So what is the difference in the IRD penalty calculations worth to the four fixed-rate mortgage borrowers in the examples above? Since they could have secured the same upfront interest rate from either group, the only difference in their relative borrowing costs is the extra penalty they had to pay the Big Five. Now for the fun part. 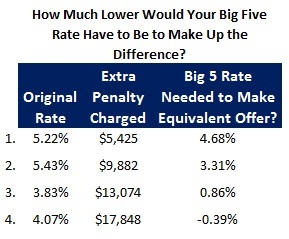 I wanted to figure out by how much the Big Five would have to drop their interest rates to make the cost of borrowing offered by them (rate + penalty), equivalent to the cost of borrowing offered by the Some Other Lenders group. The table on the left shows the analysis, and no, the negative rate in the fourth example is not an error. The difference in the penalty charged by the Big Five on this mortgage is so large that they would have to PAY this borrower an interest rate of .39% to make an equivalent offer! And if interest rates start to rise, this borrower’s profile (an interest rate at or even a little below today’s rates), will look an awful lot like the profiles of people who are considering fixed-rate mortgages today.

The saddest part is that I really shouldn’t have to be writing this post. The Big Five do not have to disclose their method of calculating mortgage penalties. If they did, borrowers would better understand the huge risk of higher penalties they face and would aggressively look for alternatives. I even wrote a post earlier this year imploring Finance Minister Flaherty to follow-up on his 2010 budget promise and address this issue. Unfortunately, nothing has been done to date, so it falls to the blogosphere to level the playing field.

If you’re among the two-thirds of Canadian borrowers who opt for a five-year fixed-rate mortgage each year, what is this difference in the way mortgage penalties are calculated worth to you? For the four borrowers in my example, the additional rate discount required to make the Big Five’s cost of borrowing equivalent to the cost of borrowing offered by the Some Other Lenders group starts at .44% and goes up to a whopping 4.46%. Those numbers tell us that even if you’re still convinced that you won’t end up ha

ving to break your fixed-rate mortgage early, you should think twice before betting thousands of extra dollars in mortgage penalties that you’re going to be right. To revisit a familiar theme, you don’t expect your house to burn down but you still pay for fire insurance. Insuring against outrageous penalties on your mortgage can be free – you just have to choose the right lender.