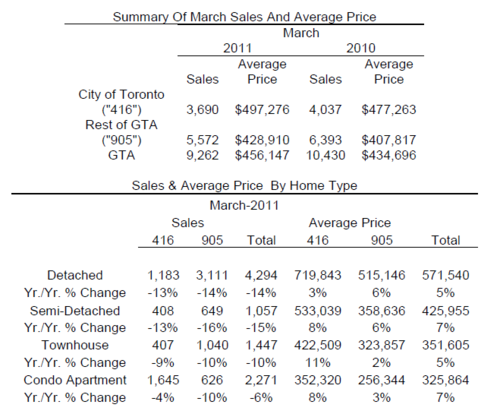 The latest sales statistics from the Toronto Real Estate Board:

Greater Toronto REALTORS® reported 9,262 transactions through theTorontoMLS® system in March 2011, representing the second best March result on record. The numberof transactions was 11 per cent lower than the record result reported in March 2010.

“The strong home sales reported in March and throughout the first quarter of 2011 have been based on asolid affordability picture and improving economic conditions in the GTA and country-wide,” said TorontoReal Estate Board (TREB) President Bill Johnston.

The average selling price for March 2011 was up five per cent year-over-year to $456,147. The strongestaverage annual price growth was reported for condominium apartments and semi-detached houses, atapproximately seven per cent for both home types.