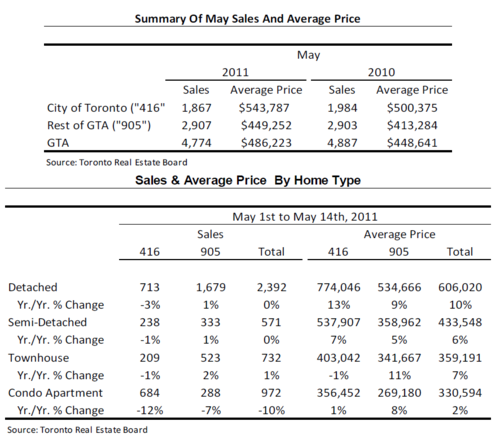 Toronto Home Prices Up 8% Mid May

The Toronto Real Estate Board published their mid month sales numbers this week:

“The strong sales reported for the first half of May reflect the positive economic outlook for the GTA. With the number of jobs increasing and earnings growing, it makes sense that households remain confident in their ability to purchase and pay for a home over the long term,” said Toronto Real Estate Board President Bill Johnston.

“The average home selling price has been growing at a faster rate over the last two months. This is not surprising given that the number of homes available for sale has been down substantially in comparison to 2010. Increased competition between buyers for available listings has prompted enhanced upward pressure on home prices,” explained Jason Mercer, TREB’s Senior Manager of Market Analysis.