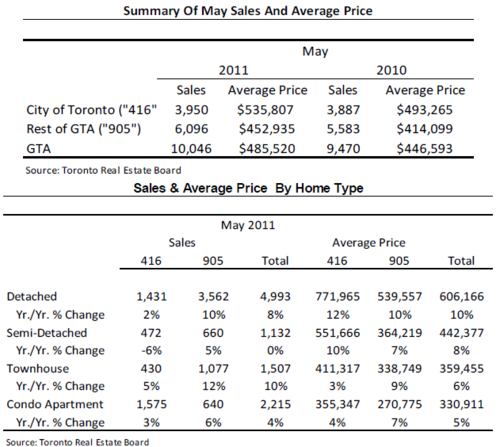 Toronto Home Prices up 9% in May

Strong demand for houses along with a shortage of homes coming on the market for sale pushed the average price for a Toronto home up 9% in May to $485,520.

Below is a copy of the Toronto Real Estate Board's press release.  A more detailed review of the numbers will follow next week.

Greater Toronto REALTORS® reported 10,046 sales in May 2011 – up six per cent compared to May 2010. This result was the second best on record for May under the current Toronto Real Estate Board service area. The number of new listings in May, at 16,076, was down 15 per cent compared to last year.

“Positive economic news and low borrowing costs led to strong sales through the first five months of the year, including the increase in May,” said Toronto Real Estate Board President Bill Johnston. “At the same time, the market has become much tighter compared to last year, due to a substantial dip in new listings.”

Homes were on the market for an average of 23 days and sold for an average price of $485,520– up nine per cent compared to $446,593 in May 2010. The strongest rate of price growth was experienced for single-detached homes sold in the City of Toronto.

“We have seen clear-cut seller’s market conditions emerge over the past two to three months,” explained Jason Mercer, TREB’s Senior Manager of Market Analysis. “The robust price appreciation that we have seen will hopefully prompt more households to list, resulting in a more balanced market later this year,” continued Mercer.