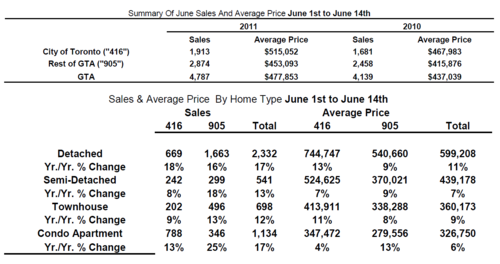 Below is a copy of the Toronto Real Estate Board's press release with their sales figures for the first two weeks of June:

“The spring has always been the busiest time in the resale market, but the results for May and the first two weeks of June represented a marked improvement over last year. Low mortgage rates have kept affordability in check and buyers have felt confident in paying for a home over the long term,” said Toronto Real Estate Board (TREB) President Bill Johnston.

The number of new listings on the TorontoMLS® between June 1st and June 14th was down by eight per cent compared to 2010.

“Listings have been in short supply this year, while a lot of people have been looking to buy. The result has been enhanced competition between buyers and more upward pressure on price,” said Jason Mercer, TREB’s Senior Manager of Market Analysis. “Strong price growth will prompt more home owners to list as we move toward 2012.”