In a financial crisis, bond yields provide a real-time gauge of whether a country’s prospects are getting better or worse. If a country’s outlook is worsening, the market will demand higher yields on its new bond issues and the government will have no choice but to pay. But those higher yields raise a struggling country’s borrowing costs, intensifying the debt burden on its already cash-strapped government. This creates more investor fear, and subsequent bond yields must be raised again, and again, and again. It is a cycle of fear that feeds on itself.

Last week, the yields on the euro zone’s latest round of new bond issues indicated that the region’s financial crisis has reached a new level of urgency. Simply put, the bond-yield gauges for Italy and Spain are now red-lining. Let’s check out the difference in their government bond yields last week versus one month ago: 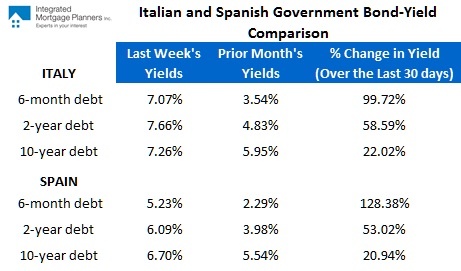 These yields are simply unaffordable over the long term for Spain and Italy, whose economic growth rates have been  moribund for years. If either (or both!) countries reach their debt tipping point, there is no mechanism in place to save them. Italy alone has to refinance $300 billion of its outstanding debt in the next twelve months, so their interest-cost tourniquet will continue to tighten rapidly.

It looks as though the only two possible outcomes left are sovereign default, almost certainly followed by the break-up of the euro, or unlimited money-printing support from the European Central Bank (ECB), which will essentially be paid for by Germany.

Which brings us to last week’s most shocking bond-market news. Germany, the euro zone’s cornerstone of economic and financial stability, had a failed bond auction. Last Wednesday it tried to sell $6 billion of its ten-year government bonds, but investors only bought $3.64 billion worth. This means that Germany (!) is now responsible for the euro zone’s biggest failed bond auction since the euro-zone crisis began. While the main reason for the failure was that Germany misjudged the market and tried to sell at a rate that was too low, the steadfast Germans had to have been taken aback when they saw their issue fail that badly, especially at a time of European crisis when they are supposed to be the safe-haven currency. )

That was a curve ball no one was expecting. It now seems that investors have changed their fundamental crisis question from “Will Germany support the euro-zone’s over-leveraged countries”  to “Can Germany, with a GDP of roughly $3.5 trillion, backstop the debts of the rest of the euro zone, with a combined GDP of $9 trillion?” To put the implications of Germany’s failed bond auction another way, if investors don’t have an unlimited appetite for German debt on its own, will they buy Italian/Spanish/Irish/Portuguese/Greek/ Belgian/Austrian or French debt even if it is backed by Germany?

On the other end of the spectrum, five-year Government of Canada (GoC) bond yields finished last week where they started, at 1.39%. Mortgage lender gross spreads are still well above 200 basis points, and while it’s true that their costs have increased lately, there is still plenty of room for them to discount five-year fixed-mortgage rates while still maintaining healthy margins. Somebody just has to be the first to blink.

The bottom line: If you’re a cautious investor there are fewer and fewer safe havens where you can park your money these days. GoC bonds are among the best options available anywhere, and that has driven our bond yields, along with the mortgage rates that are tied to them, to record low levels. Expect that trend to continue until the global economic weather improves - and by the looks of things, that will be later rather than sooner.