Editor's Note: In our "Five Questions" series, Move Smartly bloggers get answers to the questions we'd all like to ask about Toronto real estate.

Toronto architect Kevin Weiss, principal at Larkin Architect Limited, has been busy. After a fire destroyed a row of historic houses in Toronto's west-end Wallace Emerson neighbourhood, several owners contacted Weiss to help them rebuild. Linear and modern, his creations complicate the Victorian streets of Toronto.

I asked Kevin Five Questions about the working life of someone who shapes Toronto:

Urmi Desai: Why were you approached by several home owners on Franklin Avenue (Wallace Emerson) to design their houses? What made them chose you in particular?

Kevin Weiss: A couple of years ago a really terrible fire occurred which destroyed six row houses on the street.

The artist Sylvie Bélanger, who shows at the Birch Libralato Gallery and is the owner of the corner lot, was referred to me. So, it was Sylvie and her husband, Rick, that hired me first to design a new detached house on their wide lot (the source of the fire had been the neighbouring attached house). I designed a house suited for a very unique site – on a corner and across the from a beautiful treed city park – for a very unique and design-engaged couple. My firm holds centre to its belief that good clients are needed for good architecture.

As the post-fire houses were all left standing – albeit destroyed – with the six different owners in difficult negotiations with various insurance adjusters, only Sylvie and Rick had begun to prepare plans for their rebuild. Given that the house remnants were all attached together, we could not start construction until all the houses had been demolished. And in the City of Toronto, you can't demolish until you get a building permit. But the condition of the burnt-out houses was creating a hazardous situation in that a strong wind could easily cause the unsupported walls to collapse. We wrote a letter to the City stating that since demolition permits were being denied, the City would be responsible should anything happen. The City granted a permit within two days.

In the meantime, to try to get the neighbours moving along in their rebuilding process, Sylvie and Rick asked me to speak to them. I suggested that unless they worked collectively – with coordinated building plans and with one contractor – the building costs and schedule would significantly increase. The group asked me for a fee proposal. I was somewhat hesitant as the five other house owners were a widely varied group including an elderly Portuguese couple, a talented young chef Cordon Bleu in France, a highly opinionated Denturist who was acting on behalf of his mother, the TD Bank who before the fire had foreclosed on one of the houses, and finally, a very nice couple who unfortunately were in the midst of a divorce. In the end, we ended doing Sylvie’s house and three of the remaining five.

Urmi: One of the criticisms of your work on Franklin Avenue, we'll call it the "Crystal critique" (in honour of the modern update to the traditional ROM facade), is that it breaks up the orderly line up of heritage houses that Toronto is known for, and irrevocably ends a legacy that collectively belongs to us. How do you respond to this?


Kevin: I don’t agree that this critique holds true on Franklin Avenue. 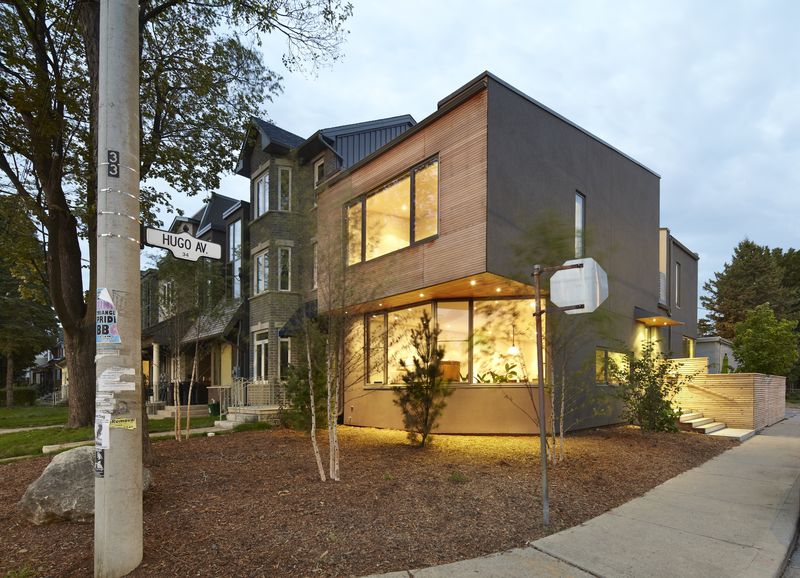 The dominate downtown house in Toronto is the narrow shotgun Victorian. Charming – perhaps. Uncomfortably narrow and starved for light – absolutely! Victorian developers – like today's spec home developers – thought little about context and merely slapped the same house up on every lot to maximize profits. They never saw the potential of the corner lot. Now, light enters the new house on three exposures and each view out was designed with the views in mind. I think this is pretty remarkable given it isn’t a country house in a field somewhere.

In regards to the whole Franklin ensemble of houses, my office worked hard to create a consistent streetscape with the existing houses. If you look, the roof line of the three row houses that we designed, as well as the cantilevered portion of the corner house, perfectly align with the porches of the other houses on the street. Also, while you cannot tell from the street, the three Franklin Houses are actually three stories in height. Given that there is this fantastic park across the street, I thought that the typical Toronto second floor deck at the rear of the house that would look out over the back-yards of the neighbours would be wrong-headed. 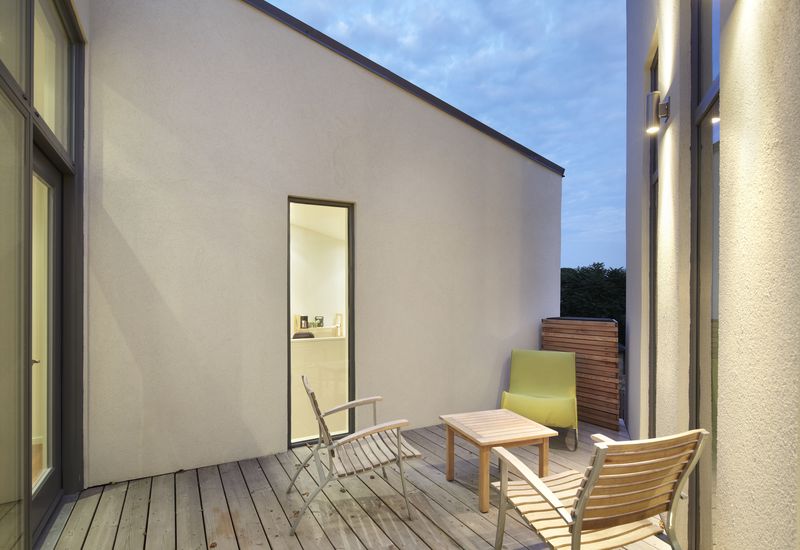 So instead, I reversed that so a third floor deck which walks out from the third floor master bedroom overlooks the park and is disguised from the front by the cedar shingle roof and giant (12 foot high) windows on the second floor.While we tried to convince the neighbours who decided to hire their own separate and different design consultants to follow some simple urban design guidelines such as porch and roof-lines, they were not interested in cooperating. In the end, I think the street line of Franklin is a little disharmonious as a result. But in some ways it is very much like residential downtown Toronto and that funny situation of attached houses being painted different colours (including half of a shared column).

I must say however, if the market does indeed determine value, one of the houses on Franklin Avenue that we designed was sold for close to two times that of existing homes in the neighbourhood so I think we did something right.

Urmi: You went to a City of Toronto Committee of Adjustment Meeting recently for a new house on Russet Avenue (Wallace Emerson). What was your request and what did you hear from neighbours?

Kevin: The main objection came from a southern neighbour who objected to the proposed scheme being built up tight to the property line as his house is also tight to the property line. He wrongly assumed that he had a right to encroach on the neighbouring property for his planned air-conditioning system venting. He rallied neighbours to object based on aesthetic grounds that a new house would not be in-keeping with their 90 year-old ‘historical’ houses.

We won of course.

Cities are never static dead unchanging museums. Even Rome is constantly in flux with new buildings and renovations. Change and renewal is what life is about.

I am very excited about the Russett Avenue house as it is another experiment on a narrow Victorian that tries to improve the inherent problems of lack of daylight and space. This house will be spatially centered around a glass courtyard!

Urmi: When you are approached to design a house, what is your process? How do you begin? Are you very ordered in your planning or do you have a less structured creative process?

Kevin: Again I need to stress that good clients are essential for good architecture. My favourite clients are somewhat eccentric – in a really good way. For me, the object of architecture is to create not so much a spatial expression of the clients's uniqueness as a space for the clients to really be themselves and expressively so. So no, my design process is not structured. I really try to understand my client’s life and their particularities.

Architecture is an act of collaboration.

Urmi: What’s the biggest risk you face during a project?

Kevin: I always tell my residential clients that at some point during the process they will be super pissed off at me.

Building a custom house is really stressful. Lots of things can go wrong and need to be sorted out. But, I have to say, in the end, having shared in a journey as important as designing and building someone’s personal home, a real friendship generally occurs.

It was strange to design a house with a Bank’s Risk Management Department as a client on Franklin Avenue. The professional and impersonal relationship was alien to the process of designing custom houses.

Urmi: Architects are often accused of not taking their responsibility to "the street," i.e., the public spaces and gaps and shadows that are created as a byproduct of private houses and buildings, seriously enough. How do you see this tension between private commission/consumption and public impact?

Kevin: I have a Master’s Degree in Urban Design so this question is examined in our work all the time. A really good example is a project we did at the University of Toronto – Regis College at the corner of Wellesley and Queen's Park. 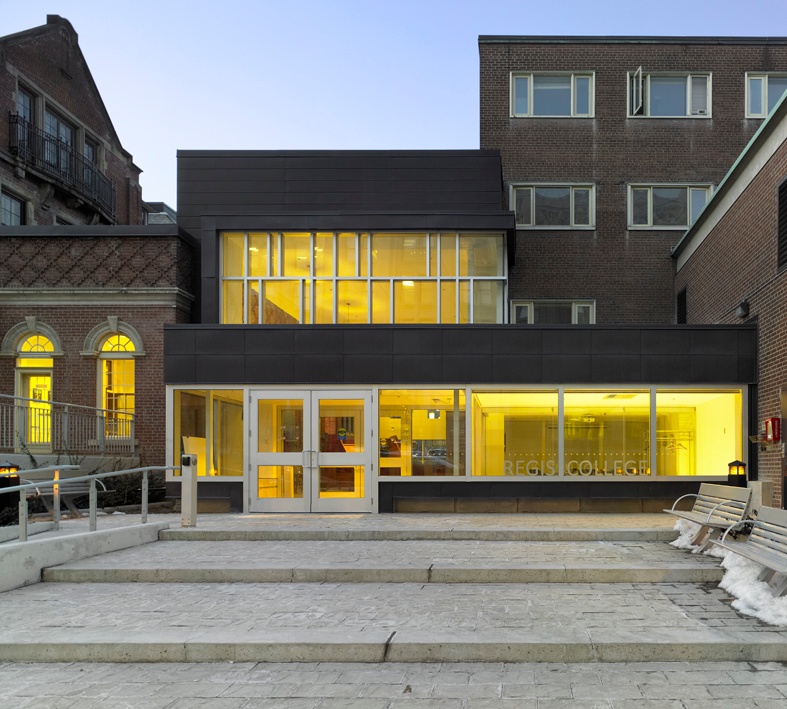 We renovated the historical Christie House (of cookie fame) and designed a zinc and glass addition linking the heritage house to another university building. Rather than creating an exuberant ‘crystal – like’ expression (to use your nomenclature) the form really reflects the mass and datums of a Victorian Mansion, albeit modern. It is in the interior where our design exuberance occurs as a spectacular curved red metal staircase takes a central role.

Urmi: At a recent debate, Jack Diamond, celebrity architect, held that Toronto was a nice city but would never be a beautiful one. Do you agree?

Kevin: I spent many years working at Diamond Schmitt and know Jack’s views well. Jack, in my opinion, is one of the few architects in this city that understands architecture to be a life-enabling act and not just an aesthetic backdrop.

I think that we in Toronto generally have a beautiful life and a city that provides for this.