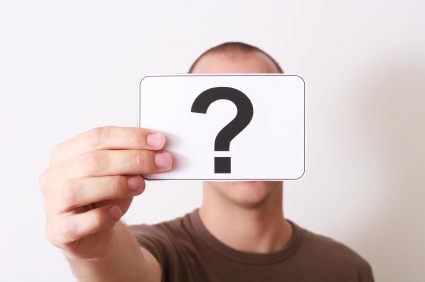 Would You Save More With a Fixed or Variable-Rate Mortgage? (Rate Simulator – 2011 Year End Edition)

The narrowing gap between today’s fixed and variable rates (3.39% vs. 2.80%) makes it harder to decide between them. Do you take the fixed rate because it gives you payment certainty for a premium of only .59%? Or do you bet that the same subdued economic forecasts that are driving fixed rates down will lead to a drop in the variable rate?

To help you ponder those two questions, we’ll run three variable-rate scenarios to show you: 1) when a variable rate will save you money, 2) when you’ll just about break even, and 3) when choosing a fixed rate will leave you better off. You can then decide for yourself which of these interest-rate scenarios seems most likely.

Here are the basic guidelines for this exercise, with a couple of tweaks since our last simulation:

Variable-Rate Simulation #1
In the first simulation we assume that the BoC cuts the overnight rate by .25% in June and September of 2012, lowering the variable rate to 2.30%, where it stays until 2014. At that point, we get increases in March and September of 2014, and then as the economy starts rolling again, we see .25% increases every quarter from March 2015, through to November 2016. By the end of the five-year term, this variable rate has risen to 4.55%.

In this scenario, variable-rate borrowers come out ahead. They pay $5,491 less interest and they are left with a closing balance that is $2,277 lower, for an overall savings of $7,768.

Variable-Rate Simulation #2
In our second simulation we assume that variable rates stay flat until rising by .25% in March 2014, and by another 25% in each subsequent quarter of that year. We then assume further .25% increases in June and September of both 2015 and 2016, with the variable rate finishing its five-year term at 4.8%.

The second scenario is a wash. The variable-rate borrower pays $212 in extra interest, but finishes the five-year term with a principal balance that is $368 lower than the fixed-rate borrower. The cost difference between the two rates is only $156.

Variable-Rate Simulation #3
In the third simulation we assume that the BoC starts to raise rates by .25% every March, June, and September from 2013 through to 2016, pushing the variable rate that started at 2.80% to 5.80% at the end of five years.

If the third scenario occurs, variable-rate borrowers will wish they had gone with a fixed rate. They pay an extra $6,494 in interest over five years and owe an extra $1,406 in principal at the end of their term. On a net basis, they are $7,900 worse off than borrowers who chose a fixed rate.

Here is a summary chart to give you a visual sense of how these rate simulations compare over five years: 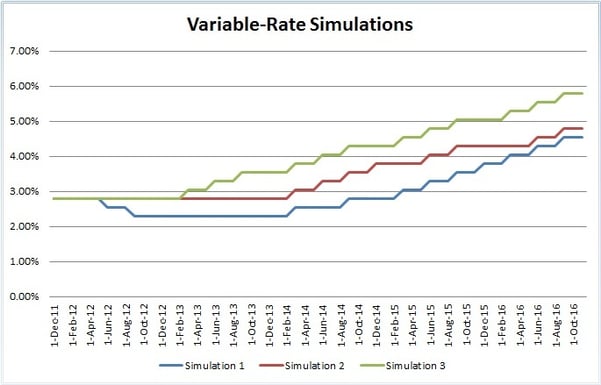 Keep in mind that while five-year fixed and variable-rate mortgages are the most popular two choices among Canadian borrowers, there are myriad other terms and types available. For example, hybrid mortgages, which allow you to combine fixed and variable rates, are increasingly popular with borrowers who want to save money and hedge their exposure at the same time; and there are other fixed-rate terms that are attractively priced.

The purpose of this exercise is to test fixed versus variable rates under a variety of interest-rate scenarios, not to offer an opinion on where rates may actually be headed. If you want my ongoing opinion on that fundamental question, check out my Monday Morning Interest Rate Updates.

While narrower interest-rate spreads have made it more difficult to choose between fixed and variable rates, the good news is that, with both rates near all-time lows, you have far less chance of making a bad decision either way.