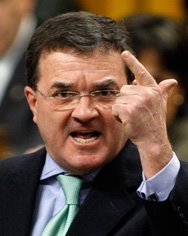 As we say goodbye to another year, it's always instructive to take note of the year that was. What did we hope for? Worry about? And how did things actually play out? Here's my review of the key stories behind Toronto's real estate market in 2011.

To kick off 2011 Finance Minister Jim Flaherty decided to make some changes to Canada's mortgage rules including reducing the maximum amortization from 35 years to 30 years. I anticipated that a mini boom would follow as many buyers would rush to buy ahead of the March 18th deadline (indeed Toronto's sales-to-inventory ratio climbed from 36% in January to 56% in March).

In my January market update I looked at whether or not Toronto house prices were on the way up or down by comparing figures published by the Toronto Real Estate Board and by the National Bank Teranet House Price Index. TREB reported an increase in house prices while the House Price index showed a decline in prices.

Economic research firm Capital Economics published a report that suggested that house prices in Canada could easily fall by as much as 25% over the next several years(in actuality, house prices increased by roughly 5% nationally and 10% in Toronto in 2011 ).

But not all economists agreed. From Scotiabank economist Adrienne Warren, “We lack the triggers that prompted the U.S. market to crash, I think what you see is prices staying flat as incomes rise over the next few years.”

RBC Economics forecasted that home prices in Ontario will rise a modest .5% in both 2011 and 2012.

Although sales were down 14% in February, my market watch for the month showed that the market was actually heating up and moving further into seller's market territory.

BMO decided to weigh in with their thoughts on Toronto's real estate market in March, predicting that house prices would cool down and stabilize in 2011. This forecast sounded very similar to a BMO forecast published last week in the Star predicting a cool down in 2012.

In March, I shared a few of my thoughts on buying in an up and coming neighbourhood in Toronto.

An RBC survey found that Canadians are confident about buying a home.

A report released by Bank of America Merrill Lynch predicted that Canadian house values will not see a significant decline. 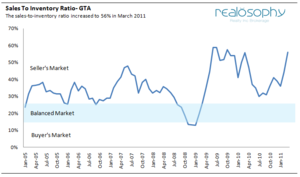 There were 19% fewer properties listed for sale in March which pushed the market deep into seller's market territory.

And finally in March, our brokerage Realosophy jumped onto Twitter @realosophy. We admittedly have yet to fully embrace the micro-blogging website, using it mainly to post blog post alerts along with the occasional rumour watch. Maybe we'll learn to love Twitter in 2012.

Macquarie Capital Markets published a report arguing that buying a REIT is more profitable than buying a condo.

Realosophy Analytics powered the Globe and Mail's Home Value Survey in April.  The home value survey showed the annual appreciation in house values for the first three months of 2011 on an interactive map.

Sales were down 17% in April and the total number of homes available for sale declined by 23%. Prices were up 9% the same month.

At Move Smartly the blog, we had Five Questions for...The Globe and Mail's John Daly on Toronto's Condo Love.

There were 27% fewer homes available for sale in May which kept us deep in seller's market territory.

The Competition Bureau sued the Toronto Real Estate Board for restricting access to the MLS database.

And we reported on Toronto's hottest neighbourhoods in May...

Realosophy launched its first Top Ten Toronto Neighbourhoods list in June, kicking off with the best Toronto Schools on a $500K budget.

Economic research firm Capital Economics, apparently concerned that people continued to buy houses in 2011 despite their February forecast for a 25% decline in house values, sent out the exact same forecast in June.  The CBC headline: "Canada's 'housing bubble' deemed close to bursting".

Sales were up 21% in June and the available number of homes for sale declined by 24%, pushing prices up 10%.

A CIBC report concluded that a crash in house prices is unlikely because the two pre-conditions for a crash, 1) a significant increase in interest rates and 2) high number of high-risk mortgages, are not big risks in Canada

TD predicted that home sales would decline 12% over the next two years.

Realosophy revealed the Top 10 Most Walkable Toronto Neighbourhoods Over $1 Million.

And as the Competition Bureau's battle with TREB escalated, we wondered if we'd soon see the end of MLS.ca?

By July, RBC realized that their .5% appreciation forecast for the year was off target, so they revised their forecast up to 4.4% for the year.

RBC was not alarmed by the condo construction boom.

The number of homes listed for sale increased 16% bringing some much needed supply on the market or buyers.

Mr. Toronto Life Leaves Toronto: Our very own Urmi Desai's thoughts on the Toronto Life story that whipped the city's media types into a frothy lather.

Realosophy revealed which Toronto neighbourhood gets you the most bang for your housing buck: Top Ten Toronto Neighbourhoods for Purchasing Power Parity.

CMHC predicted that the housing market will cool down through the fall and winter.

A busy month for us.

Realosophy's introduced our awesome Toronto Neighbourhood Match tool, which we've dubbed the "eHarmony" for Toronto neighbourhoods. The tool was featured on the front page of the Toronto Star's business section, resulting in a lot of consumer interest and flooded Realosophy inboxes - good times.

And Realosophy Analytics powered the Globe and Mail's home value survey in September, which once again reported  on how Toronto's neighbourhoods were appreciating. 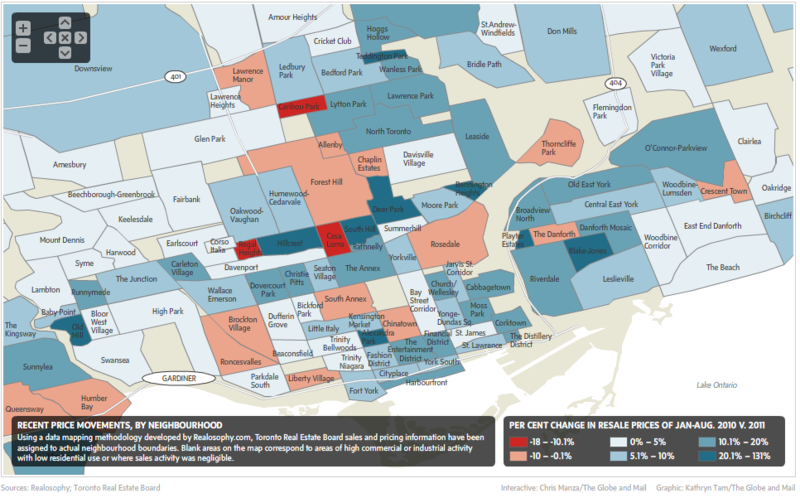 Federal Finance Minister Flaherty found no evidence of a housing bubble in Canada.

Bank of America Merrill Lynch reported that Toronto's condo boom is about to burst.

I outlined many troubling signs in Toronto's condo market.  My analysis was later covered in Toronto Life and Canadian Real Estate Magazine.

Sales and new listings for Toronto houses were up 14% and 17% respectively in October.

Realosophy said yes! to the walkable family lifestyle on a budget with our 3-Bedroom Subway Access for $500K Top Ten Neighbourhood list.

In response to concerns raised in September, several condo industry insiders argued that all is fine with Toronto's condo market.

Toronto real estate sales were up 11% in November.

The Economist warned that house values in Canada are overvalued by at least 25%.

I ended the year with A Closer Look at Canada's Real Estate Market comparing the change in house values in eleven Canadian cities.

And continuing a familiar trend, the Bank of Canada warned that the condo boom may be coming to an end. While the Star reported some troubling signs with the Trump tower in Toronto.

And we ended the year the way we began with negative forecasts for Canadian real estate. Bank of Canada Merrill Lynch saw 'Classic bubble' signs in Canada's real estate market. And the IMF says Canadian house prices are 10% overvalued.