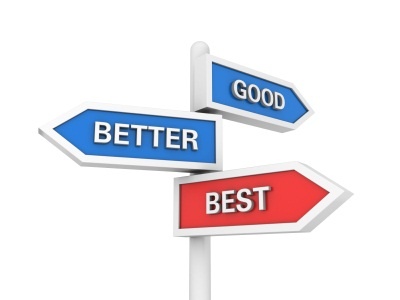 It’s time for another rate simulation but this time we’re going to change it up.

The age old fixed-versus-variable question is off the front burner now that five-year fixed rates are available for only .5% more than five-year variable rates. When the spread between fixed and variable rates is that narrow, most borrowers just don’t think the variable rate offers enough of a margin of safety. Under today’s market conditions, I would agree.

Instead, the question most people are toying with these days is this: Does it make sense to lock into a ten-year fixed-rate mortgage instead of opting for the standard five-year fixed? When you consider that the market five-year fixed rate has averaged about 5% over the last decade, ten-year money at less than 4% starts to look very tempting.

To help you answer the five year/ten year question, today’s post will run three different scenarios to forecast where five-year fixed rates might be in five years (when today’s five-year fixed-rate would be coming up for renewal). Instead of explaining my view on where mortgage rates are headed, today’s post will show you when locking in for two consecutive five-year fixed-rate terms is cheaper, when the five year/ten year choice breaks even, and when choosing a ten-year fixed rate will leave you better off. You can decide for yourself which of these scenarios seems most likely.

Here are some basic points to review before we get started:

Once we have compared the three different scenarios, I will close with some points about the ten-year fixed-rate mortgage – an often misunderstood product that is worth a long look from conservative borrowers who are willing to pay a small premium for a decades’ worth of interest-rate insurance.

In this simulation we assume that at the end of the first five-year term, you are able to renew into a second five-year term at 4.25%.

If this scenario unfolds, choosing the two consecutive five-year fixed-rate terms (3.19% today and 4.25% at renewal) will save you a significant amount of money. The total of your monthly payments will be $3,331 lower and your outstanding balance at the end of this ten-year period will be $732 lower than if you had opted for the ten-year period instead. In total, choosing two consecutive five-year terms will have yielded you a net savings of $4,064 over the next decade.

Notice that the borrower who took today’s five-year fixed rate at 3.19% but then chose to set her monthly payment using today’s ten-year rate ended up with a total savings of $5,561. While she only saved $245 on her monthly payments over the entire period (because she ploughed her interest-rate savings back into her mortgage), her outstanding balance at the end of ten years is substantially lower. That lower balance will continue to reduce her future interest cost by thousands of dollars over the remaining fifteen years of her loan.

In simulation #2 we assume that at the end of the first five-year term, you are able to renew into a second five-year term at 4.65%.

That said, the borrower who took today’s five-year fixed rate at 3.19% and chose to set her monthly payment using today’s ten-year rate still ends up better off. While she makes an extra $2,400 in total mortgage payments, her balance is $4,054 lower at the end of ten years. On a net basis, her extra prepayments have given her a net savings of $1,653 when compared to a borrower who took the ten-year fixed rate and just paid the minimum. (Note: Our prepaying borrower breaks even with the ten-year rate when her second five-year fixed rate is at 4.82%.)

In simulation #3 we assume that in five years’ time you renew into a second five-year term at 5.10%. 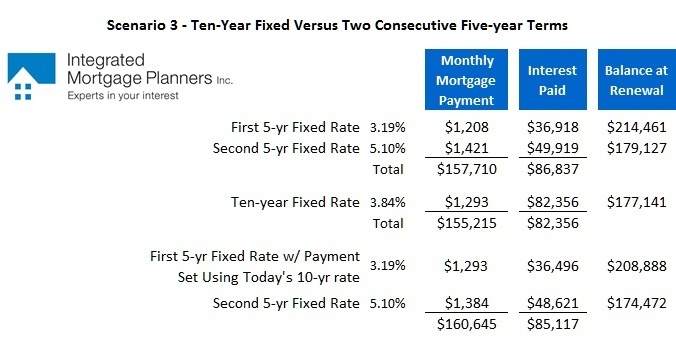 Meanwhile, our borrower who took the two five-year fixed-rate terms but set her initial five-year payment based on the ten-year repayment rate has not fared as poorly. While she made an extra $5,420 in mortgage payments, her balance at renewal is actually $2,669 lower than it would have been if she had initially taken today’s ten-year rate (again, because of the extra payments she made). On a net basis, she is only $2,761 worse off.

While I have seen a lot more interest from borrowers in the ten-year fixed-rate mortgage recently, most are still opting for a five-year fixed rate when push comes to shove. I can understand why. Choosing a ten-year option guarantees that you will be paying a higher interest rate for the first five years and you can’t be certain that you will recover that cost over the next five-year period. It’s only when you start to think of that additional rate premium as rate insurance that the decision becomes more palatable.

Here are three other important points about the ten-year fixed-rate option to factor into your decision:

I think the most important question borrowers have to ask themselves these days is whether their first priority is paying the least amount of interest or protecting against their downside risk. If you are in a comfortable financial position and can overcome economic 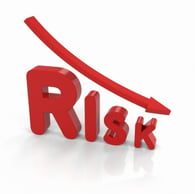 speed bumps like higher inflation and interest rates, reduced income, job loss and/or a drop in house prices, then I think it’s a coin toss between whether the five-year or the ten-year fixed rate mortgage will end up saving you money over the next decade. If on the other hand you have a significant amount of leverage and are generally more vulnerable to economic setbacks, then the ten-year fixed rate will give you better protection. Not to mention a better night’s sleep.