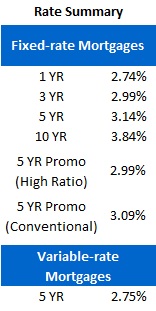 Government of Canada (GoC) bond yields plummeted last week as rising fear about the contagion effects of a Greek exit from the euro zone stoked investor demand for the relative safety of GoC bonds.

Between now and the next round of Greek elections on June 17th the markets will focus on little else. But when the should-we-stay-or-should-we-go-now Greek question is finally answered  there will still be plenty of fear to go around, and if you’re in the market for a Canadian mortgage that fear should help keep borrowing rates low for the foreseeable future (with a catch, that I will close with).

Here’s a sample of what’s next in the worry department once the Grexit stops hogging the headlines:

The Pain in Spain

When it comes to contagion risks, Greece and Portugal are grenades and Spain is a hydrogen bomb. Spain’s economy is about five times larger than the economies of Greece or Portugal and Spain’s ten-year government bond yield closed last week at 6.3% - well above the 6% threshold that many experts refer to as the point-of-no-return. If Greece is the canary in the euro zone’s economic coal mine, then  Spain is the bull in its proverbial china shop.

It seems like a long time ago when global markets quivered at the prospect of a U.S. debt default during last year’s debt ceiling showdown. The final compromise was to form a bi-partisan committee to figure out how to get the deficit under control and if it failed to do so (which it subsequently did) then an automatic spending-cut trigger called “sequestration” would take effect in January of 2013.

Last week the U.S. Congressional Budget Office estimated that the coming combination of the sequestration’s spending cuts and tax increases, along with the expiration of other tax cuts, would drain about 4% from U.S. GDP and tip the country into recession. While this ‘fiscal cliff’ can be avoided if Democrats and Republicans manage to work out a compromise, don’t expect much to happen before the presidential and congressional elections in November.

The world has little appetite for another round of U.S. debt ceiling drama and the U.S. federal government doesn’t have much dry powder left to repair the economic damage that would be caused by a drawn-out fight. That said, expect the partisans to be partisan.

While not everyone has noticed, China’s economy has been the main engine driving world economic momentum for several years. That momentum is now on the wane; China’s GDP has slowed from 10.4% in 2010 to 9.2% in 2011 and now to 8.1% in the first quarter of 2012.

The experts I read argue that China’s slowing GDP growth is the beginning of a new era of slower economic growth for the world’s second largest economy. They point to the fact that about half of China’s total GDP is derived from infrastructure investment which has far outpaced the current needs of its citizenry. This has created a surplus of little-used roads, buildings, and even cities and that over-supply significantly reduces the need for future development.

If China starts to build less it will have to compensate for the huge hole that reduced infrastructure spending will create in its GDP while also offsetting reduced export demand from its largest and most well-established trading partners (Europe and the U.S) at the same time. These two factors underpin the risk of hard landing in China.

Five-year GoC bond yields plunged by 9 basis last week, closing at 1.32% on Friday. Lenders reacted by dropping five-year fixed rates across the board and the standard rate is now offered at around 3.19%. A few lenders also launched rate specials that go as low as 2.99% for high-ratio loans (where borrowers have less than 20% equity in their property) and as low as 3.09% for conventional borrowers (who have equity of 20% or more). If that seems backwards, keep in mind that high-ratio borrowers have to pay an additional insurance fee that is between 2 to 3% of their mortgage balance, so while their interest rate is lower, their total cost of borrowing is still higher.

Variable-rate mortgage discounts are being offered in the prime minus .25% range. With the current prime rate  at 3%, if you took a variable-rate mortgage today you would be starting with a rate of 2.75% and it would only take one .25% rate increase by the Bank of Canada to make the five-year variable rate about equivalent to today’s best five-year fixed rates. Given that, I don’t think most borrowers are saving enough to justify taking on variable-rate risk.

The bottom line: While Canadian mortgage borrowers have benefitted from the turmoil beyond our borders thus far, our now miniscule GoC bond yields are a reflection of the growing risk of a near-term systemic shock to the global economy. Such a shock could easily push up bond yields everywhere and if this happens, our mortgage rates could move sharply higher with little warning.

While I expect our borrowing rates to stay low for the foreseeable future, we’re by no means in the clear because that view is based on the assumption that none of the world’s ailing economies will die on the operating table. Fear has been good for our rates, but panic could easily be bad.