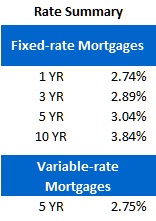 This week’s Update was going to focus on the latest employment report from Statistics Canada and how it brought an end to our March and April run of higher-than-expected job creation data. The 7,700 new jobs that were created in May were much more in line with our other economic indicators, like GDP growth, and while the report wasn’t bad, it effectively ended the debate about whether our surprisingly strong job numbers were the first green shoots of a broad-based economic upswing or a temporary anomaly caused by slower-than-expected job creation over the winter.

And then Spain happened.

After repeatedly denying that Spain would require a bailout, Spanish Prime Minister Mariano Rajoy announced over the weekend that his country was requesting approximately 100 billion euros in emergency funding  to recapitalize its imperiled banking sector. (This will be done through a program called the FROB, which, when translated into English, stands for the Fund for Orderly Bank Restructuring. I can only assume that this name was chosen because the Fund for Disorderly Bank Restructuring was already in use…but I digress).

So what does this mean for the euro-zone crisis and, more importantly for my readers, Canadian mortgage rates?

First, this latest bailout unfolded in the same manner as each of its predecessors. The euro-zone’s leaders waited until what seemed like the last possible moment and then offered a weak solution. Although it might do just enough to keep speculators from pushing Spanish bond yields past the point-of-no-return in the near future, it does little to restore investor confidence over the long term. (The experts I read are predicting that the true cost of saving Spain will be in the trillions, not billions.)

This incrementalist approach has evolved because euro-zone leaders are constantly faced with the same dilemna, which is that the very emergency measures that are needed to save the region from collapse are by their nature perceived to run counter to the national self-interests of their respective electorates. It isn’t lost on these decision makers that just about every incumbent who has stood for re-election since the crisis began is no longer cashing a government paycheck. Although it’s hard to imagine that letting the euro zone collapse would be any better for a government’s re-election prospects, decisions about whether to support more bailouts look like choices between the devil and the deep blue sea.


The most interesting feature of this latest bailout is that it comes with no new austerity strings attached. German leaders seem to now be acknowledging that their over-arching austerity-at-any-price theme has been going over like a led zeppelin in the peripheral countries. Spain’s justification is that this is a banking-sector bailout, not a government bailout, and as such has not been caused by fiscal mismanagement by the government. But that seems like a pretty thin hair to be splitting when you consider that Spain’s fiscal deficit is at 10%, versus the 5% it agreed to only a few months ago, and even more so when you consider that Ireland’s bailout occurred under almost the exact same circumstances of property bubble, banking crisis and then government bailout - with several pints of austerity to boot.

The Irish have been quietly taking their lumps until now but I bet they were burning up the phone lines to Berlin over the weekend.

Government of Canada (GoC) five-year bond yields rose 22 basis points last week, closing at 1.29% on Friday. That’s a big move that I would explain as a change in investor sentiment from “the world economy is going to implode any minute now” to “the world exonomy still might implode but probably not today”. The rally had no effect on our fixed-mortgage rates and in fact, a few lenders actually cut their five-year fixed rates last week. A market five-year fixed rate now goes for about 3.09%, which still gives lenders a healthy margin and as usual, borrowers who shop around can do a little better.

There was a silver lining in last week’s jobs report for variable-rate mortgage holders. A slower pace of job creation means that our economy will take longer to reach its full capacity and that’s one of the key measures that Bank of Canada (BoC) Governor Mark Carney uses when setting our interest-rate policy. I’d take a strong jobs report over a so-so one any day, but at least slower job creation makes it less likely that the BoC will raise its overnight rate (on which variable rates are based) any time soon.

The bottom line: I think that any early-week sell off in GoC bonds that is related to Spain’s bailout announcement will be short lived. The markets will soon turn their attention to the Greek election this Sunday and that should quickly restore investor appetite for the relative safety of debt that is backed by the full faith and credit of our federal government. This, in turn, should keep our GoC bond yields, and by association our mortgage rates, at ultra-low levels until the euro-zone crisis looks a lot different than it does today.