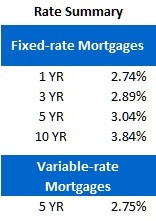 While bond-market investors will be focused on the Greek election results this morning, they will shift their focus back to the Spanish elephant in the room soon enough.

Spain’s $100 billion euro bank bailout was hastily announced two weekends ago in a desperate attempt to restore investor confidence not just in Spain, but in the euro-zone’s other imperiled peripheral countries and in the whole euro-zone experiment itself. So far it has failed miserably.

Like all of the other emergency measures concocted by the euro-zone’s leaders, Spain’s bailout announcement was more than a day late and a more than a few billion euros short. The anticipated post-announcement bond-market rally was over before most North Americans had finished their Monday morning coffee. In the week just passed, Spanish ten-year bond yields soared 66 basis points higher and closed at 6.87% on Friday. That leaves Spanish ten-year bond yields perilously close to the 7% level which has been the point-of-no-return for every other already bailed-out euro-zone country thus far.

So beside the obvious problem of being too little too late, why didn’t Spain’s bank bailout work as intended? After the announcement was made and the euro-zone’s press podium was once again returned to its in-case-of-emergency-break-glass case, investors began parsing the scant details behindSpain’s bailout plans and didn’t like what they saw.

For starters, who will pay for this bailout? The experts I read believe that Spain’s bailout will need to be at least partly funded through the European Stability Mechanism (ESM) rescue fund, which has so far only been ratified by three of the euro-zone’s seventeen member countries (and Germany isn’t one of them). Italy, another euro-zone country teetering on the brink of insolvency, has committed to provide 22% percent of the ESM’s funding support and Spain itself is on the hook for 8% of the total. You read that right – the plan in place includesSpainbailing out itself.

ESM funds can, by rule, only be issued on the condition that all existing holders of the bailed-out country’s sovereign debt are subordinated. That means that if Spain defaults, the ESM’s emergency funds must be fully reimbursed before bond-market investors see their first dime. Thus, the more ESM bailout money that is used, the longer the line in front of the other Spanish bond holders gets and that is why non-state bond investors have now effectively shut Spain out of the open market. Instead of helping to ease market fears then, this bailout has virtually ensured that Spain’s funding needs will only be met by one form of state-sanctioned bailout or another for the foreseeable future.

The other question that won’t go away is how much more of this will Germany take? Can/will a country with a slowing economy and a GDP of $3.5 trillion continue to backstop the rest of the euro zone with its combined GDP of $9 trillion? Germany is already on the hook for $280 billion euros in bailout commitments and that number could easily rise to $650 billion euros (about 25% of Germany’s GDP) before the crisis is over. Imagine how that looks to a German taxpayer.

Unsurprisingly, a recent survey showed that an overwhelming number of Germans now want Greece to exit the euro and the Franco-German partnership between Nicolas Sarkozy and Angela Merkel that fuelled euro optimism appears to have dissolved with the election of Francois Hollande, France’s new President. The stark philosophical rift between French President Hollande and German Chancellor Merkel was in clear evidence when President Hollande’s first official act was to decreaseFrance’s retirement age from 62 back to 60 at the same time that Chancellor Markel raised Germany’s retirement age from 65 to 67.

Germany has consistently demanded that its bailout commitments be tied to an increased fiscal union between the euro-zone countries but developments like the growing European anti-austerity movement and President Hollande’s hard left turn make that increasingly unlikely.

Five-year Government of Canada (GoC) bond yields were down 10 basis points for the week, closing at 1.19% on Friday. Despite this substantial drop, five-year fixed-mortgage rates were largely unchanged and market rates are still in the 3.09% range. While GoC bond-yield movements normally have a direct and fairly immediate impact on fixed-mortgage rates, we live in strange times. Federal finance minister Jim Flaherty has put the word out that he is not comfortable with large lenders offering five-year fixed-rates at less than 3%. As such, the next significant move in the five-year fixed rate will be up - but probably not until the five-year GoC bond yield rises above 1.50%. That means that our lenders will continue to enjoy very healthy spreads for as long as the not-so-invisible hand of government guides their interest-rate policy. Strange times indeed.

Five-year variable rates are still priced at only a fraction below comparable fixed rates (2.80% vs. 3.09%) and as such, I don’t think you are saving nearly enough to justify floating-rate risk. While some variable-rate borrowers believe this risk is minimized if their mortgage gives them the ability to convert to a fixed rate at any time, on closer examination that option is not as attractive as it first appears. There are two reasons for this: 1) Lender conversion rates are always higher than the rates offered to new customers for the same term (todays’ best five-year fixed rates are offered in the 3.09% range while today’s average conversion rates are offered in the 3.39% range). 2) Fixed rates normally rise ahead of variable rates so fixed-term conversion rates are likely to be much higher by the time variable-rate borrowers start thinking about locking in.

The bottom line: While fear and uncertainty have driven our GoC bond yields (and by association our mortgage rates) to record low levels, this is a thin silver lining on an economic day that is otherwise cloudy. While it may surprise you to read this, I think we will all cheer when interest rates rise above today’s emergency-low levels because barring a total financial meltdown, higher rates will signify the start of a broad-based recovery and a return to health for the global economy. For now, that day still appears to be a long way off.